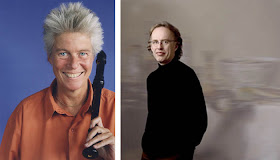 The program opened with a rarity, the Orchestral Suite No. 4 in D Major, by Johann Bernhard Bach. You read it correctly; his middle name is not Sebastian, because this Bach is a slightly older cousin hailing from Erfurt (Germany), not far from his famous relative’s original residence, Eisenach. While not setting the world on fire in originality, this orchestral suite has several lilting movements of bouncy fun, befitting the models of the day, and justifying it as opening act for the current season.

Advance-billed as a U.S. Premiere (though not on the printed program), Johan Gottlieb Graun’s Double concerto for gamba and violin in C has real charm, with two exuberant outer movements surrounding an introspective Adagio. Ghielmi had ample opportunity to express with subtlety and dexterity the viola da gamba’s many-stringed colors, notably in the second movement’s double-stopped (two notes at once) episodes. He would appear to be a performer with few equals on this relatively dry-sounding sibling of the viola and cello. Balance issues were noticeable, however, in this work paired with the naturally brighter sound of Ilia Korol’s violin. In context, it seemed a metaphorical conversation between an extrovertish young lady and a somewhat skittish male suitor.

The afternoon’s main sparkle arrived with three recorder renditions by Marion Verbruggen, whose athletic bearing, shock of grey hair and quick-fingered technique charged the Concerto for sopranino recorder and strings in C by Antonio Vivaldi with a gee-whiz quality that won all hearts. In her hands, Verbruggen’s super-high-pitched “sopranino” recorder sounds like a pan-pipe on steroids. To glance around the auditorium during this work was to see involuntary smiles of child-like glee from ages 8 to 88. Part of Vivaldi’s genius is his unerring ability to gauge over-the-top special effects in works like this while preserving his innate artistic taste. No wonder the Bach family adored this Italian master.

Verbruggen’s two other contributions, both using the lower-pitched soprano recorder, enlivened Georg Philipp Telemann’s Double Concerto for gamba and recorder in a minor, as well as the one universally familiar work of the afternoon, Johann Sebastian Bach’s Brandenburg Concerto No. 4 in G Major. In the Telemann, Verbruggen was ably joined by Ghielmi, her virtuoso equivalent on the viola da gamba. The Double Concerto was notable for a number of musical drolleries, and an affecting triple-metered Dolce movement, interpreted sensitively by both soloists.

The Brandenburg features two recorders; Verbruggen’s partner on alto recorder was Musica Angelica’s resident ensemble virtuoso, Rotem Gilbert. Of this magnificent work, there is little one can add to history’s affirmation; its weightless buoyancy is a supreme joy. The combined forces performed it with grace and appropriate thrust.

Haselböck enforced brisk tempi throughout and, for the most part, coaxed sharp phrasing from his forces. But for all the effort of Haselböck to both conduct the ensemble and perform continuo on the harpsichord, only his conducting registered. Placing the harpsichord’s keyboard so that the seated conductor can face his musicians makes sense, but the unfortunate side effect is a muffling of the instrument’s delicate pluckings within a sea of string sonorities. The energetic Haselböck worked his tall frame and long fingers furiously on the small instrument, his keyboard talents wasted on us.

Which brings up another issue. The 499-seat Broad Stage is well-designed, a resource of tremendous potential for the Westside. There are some issues with its acoustics. In European art music, a balance must be struck in concert halls between projection and resonance. It is too early to make definitive judgments on the Broad's acoustical properties, but on the basis of two concerts I have attended, the sound seems a bit too insistently directed at you. I was impressed with a good sound spectrum from treble to bass. Lacking at the moment, however, is a modest “sound pillow” to float those sonorities with a gentle decay in the upper reaches of the hall. This gives the sonorities some breathing space.

Like sports cars, concert halls are notoriously finicky and require fine tuning. These initial outings are part of the hall’s shakedown, and acoustics will presumably be adjusted with time. Not to worry. Now is the time to celebrate the launching of a new performance venue that will surely prove to be a Mecca for music lovers on the Westside. Kudos for Musica Angelica’s new season and partnership with the Broad.
Rodney Punt No comments:
‹
›
Home
View web version