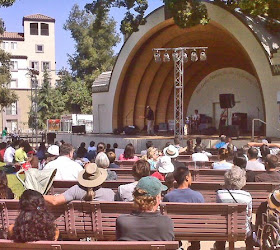 above, Kaplan on stage at Levitt; below, Tété, then Kaplan

"We didn't do a soundcheck," Tété tells the crowd at Levitt Pavillion at last Sunday's Fête de la Musique, France's annual summer solstice global celebration of music. It is too breezily perfect an afternoon for anyone in the audience to wonder why they didn't. Between songs and sometimes during them, Tété asks the mixing board engineer for more 60, less 62, less around the vocal edges...

Eccentrically, for Tété uses his guitar mostly to keep time, and his voice rarely reaches anything approaching a musical edge. It is, in fact, his undressed and earthy qualities that have brought him comparisons not only to troubadours but also to poets.

Two numbers in, the sound finally pleases Tété, who performed alone and also with bluesy Frenchman Eric John Kaiser, who now resides in Portland, Oregon and mixes French urban grit with, say, "Ziggy Stardust." Once satisfied with the sound, Tété animates a little more towards the crowd itself, introducing his songs with tiny pomo quirks: one is not about finding a kindred spirit but rather never finding one; his latest release Le Sacre dues Lemmings, complete with social view in title.

A French Senegalese, Tété mixes in more American idioms than he does world music, but his pulsing guitar, the rhythm of which dominates even the percussion in most albums, demonstrates connections both to Africa and to French banlieues.

The Pasadena crowd was much appreciative of both Tété and blusier rocker Kaiser. Also a documentary film maker, Kaiser's access to musicians such as David Bowie and Arctic Monkeys has informed his own songwriting and performing style, but not inordinately so; he has not been absorbed by any single identity and remains his own performer. We will undoubtedly see both these men at future Fêtes.
Joseph F. Mailander