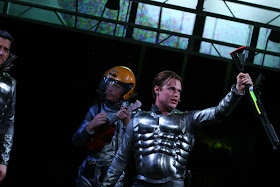 The idea of intertwining two entirely unrelated works for the sake of making a still more entertaining third is not as novel as we who are ever anxious to call something avant garde would like to believe. Used extensively in modern music from contemporary classical to Outkast, such interanimation works very well with the music of our highly fractured, synthesized and sampled, post-whatever time. The one that comes to mind is the way college students in the 1990’s discovered that the soundtrack to Pink Floyd’s Dark Side of the Moon worked very well running against the first hour or so of The Wizard of Oz—Dorothy and Auntie Em came into scenes precisely as the music brightened and darkened. It happens in theater too: I once saw an Orestia trilogy at Theater Odeon in which Vladimir and Estragon from Waiting for Godot obligingly served as the foreboding “Greek” chorus. And Peter Sellars’ mid-eighties stagings of the Mozart/Da Ponte collaborations flung Don Giovanni and others in unlikely settings such as fifties diners to intriguing and occasionally instructive effect.

Comes now a highly entertaining, obligingly scholarly, and surprisingly fluid coupling of two works to produce a new whole: the Wooster Group's La Didone is at RedCat through this Sunday. A restaging of an almost unknown baroque opera, Francesco Cavalli’s La Didone is in this production overlaid by the 1965 sci-fi cult classic “Terrore Nello Spazio” known in American release as “Planet of the Vampires” to bring something altogether new forward.

The overlay works in surprising ways. Critics—and there have been several highbrow ones—feel comfortable and even enthusiastic about the work, with the New York Times and Wall Street Journal both providing good ad copy. But few have tried to grapple with precisely why it works. Our own LA Weekly got closer in interviewing the creators and letting them explain themselves; explain they did, but even they shied away from the key point. The reason La Didone works as both performance and entertainment is the fact that the best element of marriage here is not that the two works' story-points blend so well—although there are a satisfactory number of story-points to compare and contrast—but of the way in which both forms, the baroque opera as well as the old sci-fi flick, occupy our minds: as remote, overindulgent, tinny, static, and above all camp. In short, the Wooster Group’s staging of La Didone works because not only sci-fi but because baroque music itself so often comes off on today’s stages just as camp and precious and wooden and static as old science fiction flicks do. In La Didone, the direction has made mincemeat of both ordinarily static works to bring something truly raucous to the stage.

This production trashes the static at every turn. While baroque music is often staged as archaically as the one-to-one sung-note-to-plunked-note recitative may suggest, with just-hanging-in-there oratorio even when there should be some—any—drama, and would-be gelded countertenors pony up tremolo after tremolo—it all can become truly even more camp than a sci-fi film. You are left wondering after most pure baroque performances: did Venice really do this to itself in the Seicento? But in the Wooster Group's staging of the most famous book of the Aeneid, Dido and Aeneas are running, leaping, dying here and there in their spacesuits, as screens blast all over the place like a suburban sports bar, and tech and sex and Cupid’s exaggerated arrows and a wild stag hunt and a guy with a ukelele muddle the drink—This…Worked. The hunting song for the stag hunt alone brings out ribald comedy likely never seen before in any baroque staging.

There are really three works at work here, not two, and audience members might like to revisit Liber IV of the Aeneid before attending a performance, as the Cavalli work veers in many subtle ways from Vergil's telling of the passions of the queen. For instance, the opera ends significantly more tidily than the Vergil. But the idea of creatures from outer space inhabiting the bodies of earthlings--hey, that's not oh so far from gods and goddesses inhabiting the minds of mortals, such as Dido's sister, to drive human action. As I have noted, the compare and contrast points run through the performance and in fact fairly pop out for all to note.

One quibble I had, and it was likely an ego thing: as a troupe, the Wooster Group does not take individual curtain calls after the performance. But really, the stunning mezzo, Hai-Ting Chinn, who may have as many as a third of the lines in the opera, and who is obliged to run, leap, hang on, make out, stand before an arrow, as well as sing her role to perfection, should really have her own follow spot at the end.

As Clement Greenberg said, if art as an avant garde, it must also have a rear guard. The rear guard is kitsch, and the Wooster Group has found a way to bring two static stand-alone kitsch pieces into a fully-realized and entertaining comic drama for music, noise, squelches, synthesizers, fine operatic voices, and air-ukelele. If you need something to do this weekend, this is it.
Joseph F. Mailander