Only Now for Misha

Baryshnikov at the Broad 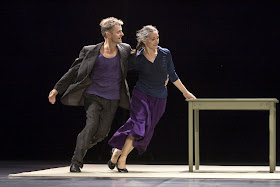 Finally! Fifteen years after the post-prime part of his career began Mikhail Baryshnikov has struck artistic gold. Yes, it took that long for the one-time Russian heartthrob to find his terra firma footing, so to speak -- no longer the paragon, at 61, who could toss off balletic pyrotechnics with laughing ease, defy gravity, devour space and dazzle us with the purity and power of his dancing.

But he always knew how to extract the human element in his characterizations of elegant, ironic humor or burning ardor.

And In a program at the Broad Stage, that little Westside jewel of a performance venue, Baryshnikov put on his best show of the decade.

At last we could forget about the primo virtuoso assoluto and find the vital dancing actor he was, and still is, even without the heady stuff. At last he did not come up empty, after rummaging through the once-revolutionary modern dance baskets, masquerading, to our disappointment, as a dark denizen of esoterica and recruiting the genre’s big-name choreographers to clothe him mostly in duds.

Here he gave us substance instead of shtick.

This time the custom-tailored pieces he danced with Anna Laguna abounded in the kind of sophistication and originality, he’s been searching for ever since hanging up his leotards and tights and heading for the less demanding portals of experimentalism.

Remember him in his prime in Twyla Tharp’s “Push Comes To Shove?” The street-wise, snazzy vaudevillian mugging his way through a Jimmy Cagney routine, ambling onstage – black derby cocked at an angle, the picture of smoldering mockery and calculated finesse – splicing fireworks from his balletic arsenal into a couth boogaloo?

Well, that same Misha, the master mime magician, materialized here in Alexei Ratmansky’s “Valse-Fantasie.” Set to Glinka’s old-chestnut, rinkydink music, the piece let our hero morph into an elegant suitor a lá Charlie Chaplin, telling graphic stories about a whole range of romantic approach/avoidance impulses and the myriad of gradations between them – often tagged with jokey modern dance accents.

But to appreciate its excellence – along with Swedish dance-maker Mats Ek’s works on the bill – you must credit these two creators for knowing how to squeeze every bit of juice from an unregenerate star who is no longer so springy or oiled as before.

Ek’s “Solo for Two” illuminates Laguna’s deep sorrow, a wrenching anger mixed with anguish as she bends herself in half, arms and torso swinging from the heavens to the ground – but not without a comic flourish here and there, flapping air up under her skirts, scratching her head.

The companion piece, “Place,” is the real marvel, its music by Fläskkvartetten (Flesh Quartet), a deliriously lyric and whimsical electro-acoustic lanscape that accelerates in volume and tempo as it mingles with the choreography -- original duet interactions the likes of which are hardly ever seen.

It has Laguna (Ek’s wife) and Baryshnikov dancing a love story, but not unburdened by stormy glitches and reconciliations, all calibrated to reflect real life. As they race in a circle, bound together as a single, ecstatic heartbeat, the image brands itself in the mind’s eye. A table, here, becomes both their prop and a gauge of emotional ebb and flow, depending on how they use it. Similarly Laguna deals with a chair in “Solo.”

A very clever tease. In effect, “I don’t want you to be able to compare me then to now.” Nor did his audience need to.
Donna Perlmutter