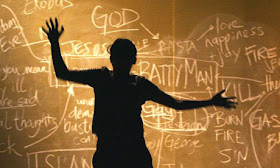 Holey Moley! Whatever could have happened to Londoner Lloyd Newson’s DV8 Physical Theatre -- the unique company that came to UCLA for the first time a dozen years ago with penetrating narratives devoid of a single spoken word? Yes, you read right. Its thoroughly amazing performances told whole, verbally-silent stories through settings, sit-drams and social characterizations.

Well, the DV8ers just returned to campus (Royce Hall, this time) and managed to break every rule it had so brilliantly established at its American debut. (More on that later.)

Back in 1997 Newson, a sober counterpart to his countryman satirist Matthew Bourne (of “Swan Lake” fame), along with a band of dancing actors, captured a machismo society’s ethos and, especially, the kind of relationships it breeds – those with fetishes and foibles, insecurities and bravado, false stances and fierce defenses, all in a context of raging neo-realism. A world of “guy-ism.”

Angry young men polished their bruises and competed as anti-heroes of one sort or another: stud, provocateur, pop singer, chug-a-lug champion, suavely swaggering pro. All of them were blokes with entry-level jobs bonding in aggressively physical encounters that often turned surprisingly affectionate. The caption to their acrobatic, body-linking antics, in the piece titled “Enter Achilles,” might be Pina Bausch meets Pilobolus.

But Newson struck all that down in his latest opus, “To Be Straight With You.” This time he veered into victim art: the degradation, cruelty and even death that gays suffer across the world (depicted in cleverly graphed statistical visuals). So not only does he ghetto-ize and narrow his frame of reference, he relies almost exclusively on the spoken word. Sad to say, he’s substituted agit-prop or a sociologist’s survey, for the genuine theatrical article.

What the collective audience-ear gets is soliloquy, seminar and sermon -- recited in barely intelligible Afro-Caribbean English by the actual dancing denizens of poor, immigrant neighborhoods. Some of them actually speak live while performing their gestural calisthenics and virtuosic moves – others resort to pre-recorded monologues. One, an Indian who cleverly combines a kind of Kathak with disco moves, is also a master at jumping rope, which he does over a vast dynamic range of speed, grace and nuance.

True, Newson’s emphasis rests with the fundamentalist Muslim world’s taboo against anything but prescribed heterosexuality – he even harpoons a hypocritical gay imam for enjoying a habitat with wife and children, while keeping his bathhouse harem on the side. And, not to leave out western religion, he documents how extreme Christians bear more in common with Muslim intolerance than do Jews, who, he says, boast a liberal posture.

But for American audiences, who now are on the verge of accepting gay marriage, there is an archaic feel to all this primitivism. How I wish that Newson, with all his creativity and powers of observation, could stay looking at the bigger picture society offers him.
Donna Perlmutter