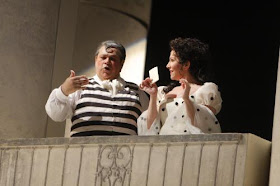 Just imagine: Zero Mostel has come back to life and he’s impersonating Dr. Bartolo, that is, the semi-lecherous old stick of a guardian in Rossini’s confection of an opera buffa, Il Barbiere di Siviglia.

But wait. This Bartolo is also a patter meister extraordinaire. In his bass-baritone voice he can cleanly articulate/sing more syllables faster and more cleanly than the long-gone tobacco auctioneer of ancient, cigarette-ad days. And his timing? Better than Jack Benny’s. In the only English line spoken at the Music Center Pavilion, courtesy of Los Angeles Opera, Bruno Praticò rolls his rotund self downstage, faces the audience as he listens to an importuning knock on the door, and in a dead-pan, without moving a muscle, says loudly, “Who Ees Dare.”

I can’t do justice to the hilarity of that moment, or any of the other like moments that the master showcases, guided here by director Javier Ulacia. But even for those who don’t care for comic opera there’s much to revel in besides Pratico, who has performed this choice role at most of the elite international houses. 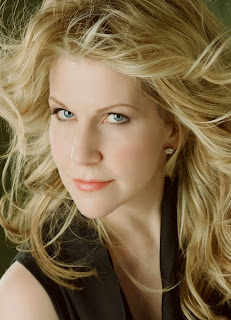 Others in the star-studded cast include the Rosina of Joyce DiDonato (left), the American mezzo (yes, a genuine coloratura mezzo, as Rossini ordered, not a canary soprano). She’s the trouper – remember? – who hobbled around on a crutch just after really breaking her leg mid-performance to “go on with the show” at Covent Garden; and, yes, she finished that run in a wheel chair!

Well, this Rosina not only lit up the house with her luscious voice and purling, nuanced roulades but she played just as nimbly as a girl who could outsmart her captor yet keep her innocence, too. What’s more, there was the Almaviva of Juan Diego Flórez – current king of the high C’s – and no slouch himself in the physical action department, although his voice sounds a tad small at the Pavilion and wiry at times. Most tenors sing sweetly, ardently and amiably but not with enough technique to seal the last act with Cessa di piu resistere, the killer aria they usually omit. Flórez does it. And with great vocal flourish. 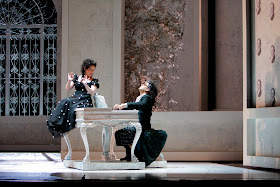 As the title character, Nathan Gunn made a cheery cohort, if not a self-important enough Figaro and sang reasonably well. But the walrus-like Andrea Silvestrelli was a big, bluff, bellowing basso of a Basilio, comic without even trying.

The point here, as in most operas of the genre, is deception – Bartolo being the ridiculous old grump of a bad man everyone wants to deceive, in order for Rosina and Almaviva to betroth. The production, originated by Emilio Sagi, who, together with his team from Madrid’s Teatro Real that gave LA Opera its characterful 2005 Carmen, also put its stylish stamp here. Gone, thank god, are all those awful buffo clichés that have Figaro costumed as a red and white barber pole, for instance.

Instead, as the overture plays – deftly but almost facelessly under Michele Mariotti – we see, off in the distance, little men in black suits emerging from the floor boards to scurry about and push in place all the movable panels of Llorenc Corbella’s set. With a huge gray sky looming over the scene, its ingenious stagecraft looks like something from a Fellini movie and its musical phrasing is unerring.

So too were Renata Schussheim’s costumes, a sophisticated fashion display with smart hats, all in black-and-white prints, stripes, polka dots that identified the various Sevillian street types, even the occasional flamenco couple (of course, everything turned colorful for the happy ending). Nuria Castejon’s choreography, especially the scene with Rosina and Almaviva singing their duet while maneuvering on, around and under a table, even sitting up back to back on the table was a marvel of musicality. Of course it required talent of this proportion to even imagine such action.

Happily, there is no prompter’s box for these performances. It’s a dream show – all of it.
Donna Perlmutter