Robert Kurka’s The Good Soldier Schweik was given more than its due in a riveting, zany revival this month by the Long Beach Opera. I caught the second of two performances yesterday, this one at Santa Monica’s Barnum Hall, on the campus of the city’s high school.

The story is based on the anti-war novel by Czech author Jaroslav Hašek, and concerns a military conscript whose seeming feeblemindedness ensnares him in, but also saves him from, one mishap after another. The book is in the surreal style of Hašek’s countryman Franz Kafka, but with a ribald humor that inspired such later works as Joseph Heller’s Catch-22. Its episodic construction and theme of alienation within military ranks also bear ancestral traces to Georg Büchner's darker Wozzeck.

Left almost complete at the 35 year-old composer’s death in 1957, final musical touches were provided by Hershy Kay. In the style of Kurt Weill’s Mahagonny and Johnny Johnson (the latter based on the same story), Kurka’s score is also indebted to the more contemporary rhythms of 1950’s film music in the manner of Elmer Bernstein. The score’s blue-note jazziness is atmospheric, but the declamatory vocal lines, it must be admitted, often lack melodic memorability. Still, piquant dissonances, quick changing meters, and the use of popular dance idioms capture the moods of Schweik’s bizarre adventures. The score is well served by librettist Lewis Allan (aka: Abel Meeropol) whose frequent rhyming couplets remain fresh and witty a half century after the work’s premier at the New York City Opera in 1958.

A non-stop, non-sequitur plot is tied together nicely in the angular grace of director/choreographer Ken Roht’s fluid staging, his youngish cast moving props and set pieces around with panache. Dan Weingarten’s floor lighting forms deep, expressionistic shadows on the characters’ faces. Marcy Hiratzka’s colorful costumes - from banana-republic uniforms to pretty-boy lederhosen - suggest the feel of decadent cabaret. Justin Jorgensen’s economical scenic design projects evocative images on a back-of-stage scrim, behind which sits a crack wind and percussion orchestra under the direction of conductor Andreas Mitisek, the company’s artistic and general director. The placement of the orchestra behind the singers loses nothing in projection, and gains by aiding the clear enunciation of vocal lines - the combined musical forces in one of those rare, near perfect balances.

Notable stage moments: a tottering bar-top that clues us to the madness to come, a double-wide hospital bed on which a half dozen wounded soldiers receive enemas, whether they need them or not, and an absurdist church scene with a hectoring Chaplain suddenly experiencing a crisis of faith, a “little man behind the curtain” moment to relish.

Matthew DiBattista’s bright tenor and cherub face make a convincing Schweik, whose frame-up for treason lands him in, sequentially, prison, an insane asylum, the military, enslavement, and finally a World War I battlefield. In the face of despair, Schweik’s mindless optimism becomes the work’s unifying theme.

Multi-role supporting players, all in fine voice, resemble a host of carnival-ride personalities. Stand-outs: Alex Richardson, in robust tenor, as the afore-mentioned Chaplain and a crazy psychologist; baritone Jeremy Huw Williams as the worried military officer Lukasch; Suzan Hanson as Lukasch’s main squeeze; and a sexy Peabody Southwell, whose seductive persuasion as a baroness gets Schweik out of one of his many scrapes. Fine turns were put in by Benito Galindo, John Atkins, Jesse Merlin, and a cast of nimble extras.

Andreas Mitisek has proved to be a worthy, energetic, and innovative successor to Michael Milenski, the Long Beach Opera’s long-serving founding director. He has shown that modest production budgets need not cramp big production concepts. His strategy to cultivate a second regular audience in West Los Angeles, complementing his base in the Long Beach and Harbor areas, should pay dividends. The large audience at Barnum Hall on Sunday afternoon received the performance with enthusiasm.

Not incidentally, Barnum Hall is an ideal stage performance space, lovely to look at, as recently restored by a civic committee to its original art deco elegance, and with outstanding acoustics. A happy partnership will hopefully continue with the Long Beach Opera.
Rodney Punt No comments:

~
Anne Midgette in the WashPo drops some surprising numbers on classical album sales:

A leaked copy of the SoundScan figures for a single week from the fall tells an equally sad tale. In early October, pianist Murray Perahia's much-praised album of Bach partitas was in its sixth week on the list, holding strong at No. 10. It sold 189 copies. No. 25, the debut of the young violinist Caroline Goulding, in its third week, sold 75 copies.

Is there any point to charting such low numbers?... 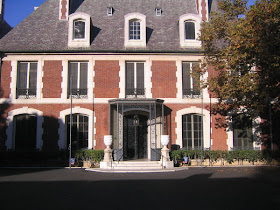 The long-standing arts organization Pasadena Showcase invites designers into a home, lets them do their stuff, and sells tours of the decorated homes to raise money for music programs. They've been doing it for over sixty years, and they're good at it, usually taking in about $3 million a year; the LA Phil and Pasadena Symphony are the greatest beneficiaries, but a few dozen other musical entities, from school bands to music therapy programs, benefit as well.

To satisfy the inner lookie loo within, Showcase also previews the house in January at an event called Empty House, which unfolded last night for media and members of the organization.

This year, for the first time in the organization's history, Showcase has taken on a home with historic designation status: the old Cravens Estate on Madeline Drive, currently occupied by the San Gabriel Valley of the Red Cross.

With historic status, the new designs must honor historic preservation guidelines, especially for flooring and cabinetry. The designers report that the two historians on board with the project, one from the City of Pasadena and one from a Southern Cal historic group, have not been especially draconian about preservation matters to date.

The Cravens Estate was completed in 1930. It was designed by San Francisco architect Lewis P. Hobart, who studied at the Beaux Arts in Paris and drew inspriation for the house from the imposing Château de Vaux-le-Vicomte, built for Louis XIV's finance minister, the fabled Nicholas Fouquet. Originally on sixteen acres, now the acreage is trimmed and the home sits perpendicular to the street. It belongs to the Red Cross, to whom a later owner deeded the property.

Designers who impressed at Empty House include Joshua Cain of Saxony Design Build, who will aspire to populate the immense drawing room with mixes of traditional furniture and forward-trending fabrics, and Linda Allen, who will escape from some of the rigorous symmetry of the house with modern and asymmetrical, contemporary treatments of traditional French motifs such as silhouettes and the concave/convex Rococo patterning.

The redesigned house, which will also include several exterior and landscape touches, will be on view to the public from April 18 through May 16. Contact Pasadena Showcase for details on touring the house in April and May.
Joseph F. Mailander No comments:

Set out facts allegro and then...largo, largo...opinion unfurls. Anne Midgette today at the WashPo classical blog calls it "a perfect Plácido storm." Lisa Hirsch, an Oakland-based writer, notes that David Gockley, with not quite the name of Plácido Domingo, has not only been a wonderful and dedicated company director, but has been as fine a fundraiser as Plácido as well. The New York Times quoted an unnamed source as saying that as a manager the supertenor is "kind of suspect."

You may have read my piece in the Weekly by now on what has happened to LA Opera in recent months and by extension in recent years. As I told Lisa Hirsch, I believe that very soon, a narrative will emerge that acknowledges that the late Peter Hemmings left LA Opera in fine shape and then...something...happened. Whether that something was Plácido, economics, bombs like The Fly, a costly yet conceptual Ring that disappoints many, or some mix of some or all, will be where the narrative resumes as the company announces its new season within the next ten days.
Joseph F. Mailander No comments:
‹
›
Home
View web version