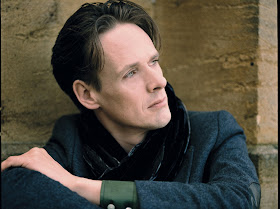 SPECIAL OFFER - Good news for LA Opus readers. UCLA Live is offering a 25% discount to our readers for this performance. Click here: UCLALive! and use the password WINTERREISE to get your discounted tickets.

It was 1994, and the British government was rolling out a cultural promotion in Los Angeles known as the UK/LA Festival. As a manager at the City's Cultural Affairs Department, I was looking for an interesting program for a radio show we produced on KUSC-FM. LA Opera's then director Peter Hemmings turned me on a young singer who just months before had created quite a stir with Franz Schubert's song cycle Winterreise (Winter Journey) at London’s Wigmore Hall.

And so I booked the 29-year-old Ian Bostridge, a tenor then unknown outside of England, to sing the same work here. We were encouraged to take a chance on him in part because he and his piano accompanist, Andrew West, were supported by a foundation in England devoted to young artists. (The UK's robust public support for the arts during the last century is one of the reasons it is a world leader in music today.)

But something seemed a little strange to me. Making an initial mark with these brooding, world-weary songs of Schubert was not the usual path for a young lyric tenor. Why not the composer's earlier and lighter-textured Die schöne Müllerin? (Bostridge was indeed soon to make an award-winning recording of Die schöne Müllerin on the Hyperion label with pianist Graham Johnson in 1996. It is one of the highlights of Johnson's formidable recording project of all the Schubert songs.)

Though originally written for a tenor voice, as was the earlier cycle, Winterreise had long been favored by baritones. And seasoned ones at that. Hans Hotter and Dietrich Fischer-Dieskau had each created definitive interpretations in their glory days. Could a mere novice like Ian Bostridge make a convincing case at so tender an age in this darkest of song cycles?

Alas, I was not to have my curiosity satisfied then, as Bostridge had to cancel due to illness. I have waited a long sixteen years for the opportunity to hear him live in this work. In the meantime, he has gone on to world-wide fame, including performances of other works in Los Angeles with the LA Phil. Today he is among a handful of the world's most renowned tenors.

Next week Bostridge makes his Royce Hall debut singing, by most accounts, the greatest song cycle in Western music. He will be accompanied by frequent piano collaborator, Julius Drake, himself a major talent in the world of song. The long wait may just prove a blessing in disguise. At age 45, Bostridge is at a career peak and has experienced a lot more of life and its challenges. He - and we - are ready for his Winterreise at this winter's end in Los Angeles.

Don't miss the opportunity to see and hear this profoundly moving work as interpreted by these two splendid artists.

CURIOSITY - Bostridge is distantly related to author James Joyce. I have forfeited the usual pint at an Irish bar this evening in order to post this on Saint Patrick's Day. Ah, the sacrifices we make for music!
Rodney Punt