The day Leonard Bernstein died, a sense of gut-wrenching loss pervaded the musical world. Anyone who had watched and listened to his extraordinary music making could not help but be affected by his passion and reverence for music. Those of us lucky enough to have known and worked with him and availed ourselves of his wisdom, still hold deep affection and respect for him, along with a feeling that we have been blessed many times over.

According to journalist Peter Gutmann (http://www.classicalnotes.net), “No musician in the history of America touched so many people so deeply and in so many ways… Hailed as a hero, Bernstein was able to popularize the classics in a way that no previous musician had ever done. An entire generation of Americans was drawn to great music through his television shows… Whatever he did was with his whole heart. Anyone who attended a Bernstein concert left feeling profound wonder not only of music, but also of life itself.”

Many others have documented the greatness of Bernstein through hundreds, if not thousands, of quotes. Celebrated Russian writer Boris Pasternak, upon greeting “Lenny” after a 1959 Moscow concert, said: “You have taken us up to heaven, now we must return to earth. I’ve never felt so close to the aesthetic truth. When I hear you I know why you were born.” Gutmann’s quote from a jaded music veteran embodies Bernstein’s contagious attitude toward music: “When he gets up on the podium, he makes me remember why I wanted to become a musician.”

Bernstein himself said: “Life without music is unthinkable. Music without life is academic. That is why my contact with music is a total embrace… I can do things in the performance of music that if I did on an ordinary street would land me in jail. I can get rid of all kinds of tensions and hostilities. By the time I come to the end of Beethoven's Fifth, I'm a new man.”

At the end of any Bernstein performance, whether listening or performing, we all felt renewed.

I count myself among those fortunate souls whose lives Lenny touched personally. Mesmerized and captivated by his Saturday morning Young People’s Concerts, I found myself less than two decades later gazing worshipfully at him from the front of the first violin section of the Tanglewood Music Center (then called the Berkshire Music Center) Orchestra, able to capture his every gesture, mannerism and raise of the eyebrow like lightning in the bottle of my mind. Studying and performing Bruckner’s Ninth Symphony with Lenny was an unforgettable experience; being married to one of Lenny’s conducting students allowed me extra personal time with our great maestro, hanging out in his conducting classes, chatting with him after rehearsals, and even being invited on rides around the Tanglewood grounds in his huge boat of a car. A few years later, as a violinist with the Metropolitan Opera Orchestra, I was ecstatic to again have the privilege and delight of working with Leonard Bernstein.

From the moment Jerome Robbins burst into Lenny’s tiny studio apartment in the Carnegie Hall building in 1943 with the idea for a ballet about three sailors on leave in New York City, Robbins became a major force in Lenny’s life. But in 1949 when Robbins proposed a contemporized version of Shakespeare’s Romeo and Juliet, the trajectory of Lenny’s career changed irrevocably. Even now, almost fifty-six years after West Side Story debuted on Broadway, hardly a day goes by without a performance of this beloved work taking place somewhere in the world, in professional, school, or amateur versions. This past summer I attended two astonishing productions of this masterpiece: a live concert version of the entire Broadway symphonic score, with Michael Tilson Thomas and the San Francisco Symphony at Davies Concert Hall; and another at Tanglewood with David Newman and the Boston Symphony Orchestra accompanying a screening of the 1961 film. Each version was very different, and each was uniquely satisfying to witness.

Maestro Tilson Thomas and the San Francisco Symphony are the first musical entity to have received permission from all four West Side Story rights holders (the estates of Bernstein, Robbins, Laurents and Sondheim) to perform the complete music to the work in a live concert setting with live singers. This groundbreaking world premiere consisted of all the music from the original Broadway show, in an orchestration identical to the one used by the Broadway pit orchestra during the work’s debut in 1957. As evident from the photo, this orchestration does not include violas. [All SFSO photos courtesy of Jessica Vosk] 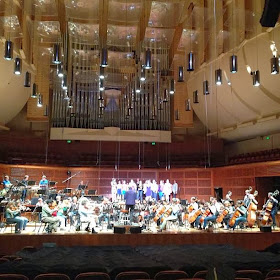 As legend has it, Bernstein was not enamored of the quality of the violists at the Winter Garden Theatre, but Musicians’ Union rules required him to employ the whole compliment of players. Bernstein got around the rule simply by leaving out the violas from the orchestration and doubling the inner voices with violins and cellos. He had not only a brilliant mind but also a clever one!

I was fortunate to attend Opening Night and parts of four other sold-out performances of the San Francisco run. Thus I was able to study the brilliant Bernstein score, an absolute thrill to hear live, in amazing detail, and to acquaint myself with the gifted young cast, several of whom I met personally. These youthful singers impressed me with their formidable talent, exuberant energy, and infectious enthusiasm, and more than once their performances brought tears to my eyes. 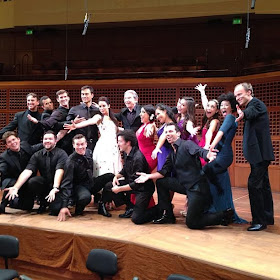 In the cast, Cheyenne Jackson, who has become known for his work in Broadway’s Xanadu and TV’s Glee and 30 Rock, gave a dramatically captivating and musically satisfying rendering of the leading role of Tony. His Maria, Alexandra Silber, complemented his exuberance with vocal loveliness and a dramatically touching performance. Their two voices blended perfectly. Jessica Vosk (Anita) steamed up the stage with her fiery, dynamite sensuality, outstanding voice and impressive ability to project every word. (It was refreshing to hear the original “As long as he’s hot” lyrics restored from the film version.) Kevin Vortmann’s gorgeous baritone gave a human element to the role of Jets leader Riff, and Kelly Markgraf’s Bernardo blazed with intensity. As “A Girl” performing the goose-bump producing “Somewhere,” Julia Bullock used her Juilliard-trained operatic voice to striking advantage. The opening Jets chorus rocked the house, electrifying the audience and setting the tone for a series of performances that increased in intensity over the run.

As Bernstein’s most prominent protégé, Maestro Tilson Thomas’s affinity for his mentor’s music was in clear evidence at any given moment, from serious to swinging, emphasizing contrasts in mood and paying special attention to the wide spectrum of percussion instruments that Bernstein included in his carefully wrought score. Adding to the excitement of Opening Night, Rita Moreno was in attendance to cheer on the cast, especially her “Anita” counterpart, Jessica Vosk. Having sprained her ankle that day, Moreno tooled around in a wheelchair, but that did not cramp her style; she was as ebullient as ever, and her presence was a true inspiration to the young singers. 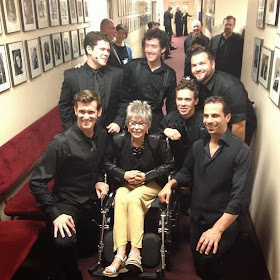 These thrilling San Francisco Symphony performances were recorded live for a CD release in 2014. I plan on being among the first in line to purchase one.

On July 13, conductor David Newman and the Boston Symphony Orchestra gave the first-ever live Tanglewood performance of the complete Bernstein film score and screening of West Side Story to a capacity audience at the Shed. Bernstein’s ties to Tanglewood are profound. Since his student days in Serge Koussevitzky’s first conducting class at the Music Center in 1940, Lenny remained a constant presence, inspiring students and audiences alike with his love of music and commitment to teaching future generations to honor the noblest of arts.

The film, shown on multiple big screens in the Shed and on the lawn, was screened with innovative formatting, courtesy of MGM Studios, which digitally restored in High Definition the original United Artists print, revealing details that had been lost over the decades. Curious as to how the vocals and dialogue could be played through the Tanglewood sound system, while the live Boston Symphony replaced the original orchestra soundtrack, I learned that this was done with a new source-separation technology, developed by high-tech firms Chace Audio in Burbank and Paris-based Audionamix. The software isolates the vocal tracks while digitally extracting the original orchestra track, thus allowing for the film to be accompanied by the full compliment of BSO players. The result was a luxurious melding of top-notch film making with the extraordinary sound of a first-rate orchestra.

In addition to the above challenges, the original musical materials for the film score had been lost. The fantastic team at the Leonard Bernstein Office in New York, which included senior vice president Paul Epstein, senior music editor Garth Edwin Sunderland, and associate producer Eleonor Sandresky, looked high and low for the film music. After an exhaustive search, they finally discovered the original score in the private collections of Johnny Green, the film’s conductor, at Columbia University; and of the film’s original director, Robert Wise, at the University of Southern California. Working tirelessly to capture Bernstein’s original intent for the film music, a whole new score was created from those materials, restoring and adapting the 465-page orchestration for live performance, including the entire end-credit music. A new engraving of the score included extra percussion, saxophones, guitar and mandolin, as well as “screech” trumpets, whose “rock the house” wailing whipped the audience into frenzy.

Classically trained veteran Hollywood conductor and composer Newman, who conducted the premiere of this version in 2011 with the New York Philharmonic for the fiftieth anniversary of the film’s debut, assessed the work as the score progressed. 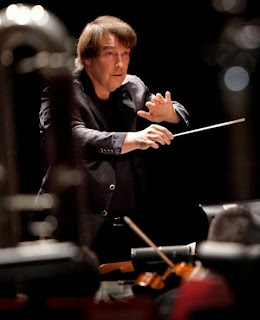 Newman’s appreciation of the unique mélange of musical theater, classical symphonic and operatic composition, pop, Latin and other elements, showed in his interpretation of the Bernstein score. His job was complicated: synchronizing the live orchestra with the film necessitated wearing headphones playing a click track, plus the use of a small monitor near the podium with a moving color-coded light bar to indicate the film’s starts and stops and cues, while simultaneously conducting a one hundred-piece orchestra. No small feat, but Newman carried it off with expertise and aplomb, giving the music a chance to shine.

Bernstein’s youngest daughter, Nina Bernstein Simmons, who attended the performance, felt the resulting score was much as her father would have intended, and that the new live-orchestra version of his work would have thrilled him. Her introduction to the capacity audience just after the intermission, along with four of the original Jets and Sharks from the film, provided an extra element of excitement in an already exhilarating evening. For those who missed this remarkable event, the performance will be repeated in February of 2014, at Symphony Hall in Boston.

After five-plus decades West Side Story continues to thrill audiences with its captivating interpretation of a classic story. Its profound emotional impact has only deepened over the years. The two versions of the piece that I witnessed left me breathless, each in its own distinctive way. As I became increasingly familiar with the details of this dazzling work, dramatized so effectively with young performers of yesterday and today, I developed a heightened awareness of the scope of Bernstein’s genius.

With the sounds of Lenny’s timeless music still resounding in my ears, I not only came away from the experience with a renewed appreciation of his brilliant score, but also with a new bottom line to Shakespeare’s immortal story:

If you want to avoid trouble, don’t give your daughter a bedroom with a balcony.