Karen Kamensek: A Young Conductor Who Knows Herself


Conductor Karen Kamensek exudes authority, gives off a distinct overachiever vibe and projects wisdom beyond her years. The sparkle of her eyes, her upbeat attitude, and her infectious enthusiasm for her craft point toward an intriguing debut this Saturday, February 15, in San Diego Opera’s romantic comedy Elixir of Love. As current music director of the Staatsoper Hannover in Germany, she has had wide experience conducting a vast array of opera genres.

EM: It’s a delight to welcome you here for your debut in this Donizetti classic. Do you feel comfortable in that genre? Do you prefer comedies to dramas?

KK: They’re different. I’ve done this piece often, so it’s really “programmed in” for me. We have great singers with great comedic timing. I haven’t met the orchestra yet, so I’m hoping they’re also lighthearted. This is like the Gilbert and Sullivan of Italian music, so hopefully it will be light enough, and happy. Important in comedy are quick tempi, too. Of course with a piece like this you have to have a mastery of the language and know how to react to things. Daughter of the Regiment is different because it’s in French, at least we did the French version in Hannover. And Maria Stuarda is totally different, it’s light, but it’s a drama. I sometimes laugh about Verdi and Donizetti and Bellini, they’re talking about death and blood and still it’s (sings) very lighthearted and in major keys (laughs), but that’s the paradox of it. There’s no recipe to emotion.

EM: And yet you’re doing Tannhauser here next season.

EM: Tell me about your background. You’re originally from the Midwest?

KK: I’m born in Chicago, raised in southern Indiana. I went to IU (Indiana University), then I moved to New York and gigged and struggled like everybody else. Then in 2000 I went to Europe, got a lucky break.

EM: Did you always want to be a conductor?

KK: I did. I’m a product of watching the Met broadcasts on Saturday afternoon, a crazy eleven year old in front of the TV.

EM: Was music in your background at home?

KK: My parents are from Slovenia, they immigrated just before I was born. Mom was a musician, a flutist and conductor and had a children’s chorus, but gave all that up when she came to America and raised us. I started very early, piano at four, violin at eight. I had a great musical background in my public school. We had our own little sistema there. That’s very popular now, but we had it back then. I had a lucky break with teachers. Orchestra and chorus every single day. I played violin in the orchestra. I had a tough choice to make in college, but it was clear I wanted to conduct so I got a piano degree first and then conducting. But my string background comes in very helpful. I often correct my own parts or ask if we can do something a certain way. The musicians see through me pretty quickly, though. They ask, “Did you play violin?” (laughs).

EM: As a violinist I always appreciated a conductor who knows string playing. Tell me about New York.

KK: I started working at the Met, I was coaching a lot, worked with Philip Glass, did the New York City Opera tour of Bohème, then ran into a dry patch and got a little bit desperate, didn’t know if anything was going to happen. Then I got a lucky break assisting (conductor) Simone Young. Her manager saw me conduct and that was the end of all the assisting.

EM: I really enjoyed working with her at the Met. Do you think women conductors are beginning to get their due, or at least gain a foothold?

KK: I think so. One likes to focus on conducting because it’s such a public job. I don’t think it’s any different than other “male dominated” professions. I know just as many young male conductors struggling to get in as female conductors. You have to be tenacious enough to follow through. I think females naturally ask themselves the question, “Is this the kind of life I want?” It’s a very aggressive lifestyle, a lifetime commitment, a lot of responsibility. And there are more opportunities for conductors in Germany. Especially if you have piano skills. If you don’t, it’s tough to break in to that profession. But I got lucky.

EM: Describe some of the responsibilities you encounter as a conductor.

KK: You have auditions, administration, negotiations, publicity, programs. Planning, hiring, soloists et al. And interminable amounts of meetings. Of course you have a whole hierarchy working for you but still you’re the decision maker and that takes up a lot of time.

EM: Do you find all of that challenging, or would you rather just focus on the music?

KK: Mixed. I’d like to be able to focus on one project at a time and not twelve at one time (laughs). As a music director in Germany my weeks are easily sixty hours in the theater, and that’s a lot. 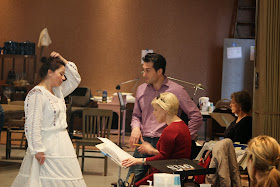 EM: As a conductor you’re just hitting your stride. You have forty-five years to go, hopefully.

KK: Great! (Laughs.) We’ll see. I have over fifty operas in my repertoire, which is fantastic for me.

EM: Do you play all of them too?

KK: If I wanted to, yes, but I hardly get any time at the piano. I played cembalo for my own Mozart operas. I coach when I can, do a little chamber music here and there.

EM: You’ve worked in Europe, Malaysia, and also in the States. How would you compare them? Any particular area that you enjoy more than anywhere else?

KK: Different. I haven’t conducted much in America. This is my first opera premiere in America here in San Diego. I’ll be back again next season for Tannhauser, and in San Francisco for Susannah in September. So these are my first experiences. Rehearsal time is limited in the States, and we have a luxurious amount of time in Europe. For operas we have an immense rotation in the orchestra, sometimes you’re rehearsing three fully rotated orchestra for one production. That’s a bit stressful because you’re chronically repeating yourself and getting criticized for it.

EM: As an orchestra player, I’m familiar with that syndrome.

KK: You learn your repertoire very fast here in the US. We’re putting this (Elixir) up in two weeks. For a new production in Europe I would have fourteen rehearsals from beginning to end. Here I have five.

EM: Is that because opera is more subsidized there, or because of the mindset?

KK: Both. From what I’ve heard, American orchestras are much quicker. Their sight reading capabilities are much higher. It’s more of a competition here. Positions in Europe are tenured, there’s a certain amount of security that comes with that, a mentality. More of a sense of tradition there, too. They play behind the beat. Generally I’m surprised by how quickly American orchestras react to the stick. Both have pros and cons. My experience up until now with American orchestras is, “My God, she’s going to rehearse. Most people let us out a half hour early,” and I use rehearsal time until the very end.

EM: Are you excited about your SDO debut?

KK: I am. I’m very much an “in the moment” kind of person, I’ve seen how precipitous events have brought me here. The years when I was desperate for work I thought I couldn’t make the apparatus move to push in the direction I wanted to; but looking back I wish I’d been a little calmer about the process. That’s what I mean about tenacity. In the moment where I actually gave up and said, “I’m done,” the universe sort of shifted and said, “All right, you mean it this time.” And then everything in quotes came to me. But I was very tenacious. If it weren’t for Simone giving me a chance and actually saying okay, I’ll take the risk, who knows where I would have been? Things came together the right way at the right time.

EM: Timing means so much. As for repertoire, you mentioned fifty operas. Is there any repertoire you prefer - German, Italian, French?

KK: Sounds like a discussion I had with my manager (laughs). He said, “You’re like a Jack of all trades, we can’t specialize you anywhere.” I tend to go toward the English operas. The Brittens. And American operas. That interests me. I’m itching to do Susannah in San Francisco. It’s done so rarely in Germany. What’s still missing in my repertoire is some Strauss, though I’ve done Ariadne. Of course I’ve done Wagner, and Verdi. I do Mozart with great pleasure. I haven’t done much Handel. I’ve said no to some things like Armida. There are conductors out there, incredible experts who are going to do better service to that. I’m a little young for specializing.

EM: Working in Germany, do you feel more of an affinity for Wagner and Strauss, or do you love to do Verdi just as much?

KK: I love Verdi just as much. I also find it very difficult. I thought I would have an affinity for Onegin when I did it for the first time because of my Slavic background, but I tend to go toward Janacek. Tchaikovsky’s more of a puzzle to me. Things like Rusalka are closer to my language. I thought I’d gravitate more toward Beethoven but I prefer Mozart. Puccini, yes, I do it, but I’m a big Britten fan.

KK: I’m doing Midsummer Night’s Dream when I get back from here. I’ve done Death in Venice and Turn of the Screw. Haven’t done Grimes or Billy Budd yet.

EM: You’ve got a long way to go, so much ahead of you, which is exciting. How many new operas do you do a year in Hannover?

EM: If you could write your own wish list of operas over the next several years, which would you like to do?

KK: I’d like to finish the Ring cycle. We did half of it last season and we’ve decided to replace it in Hannover, so I still have Siegfried and Gotterdammerung to do. Dutchman. Parsifal can wait. I’m doing Meistersinger right now. Rosenkavalier, Salome, Elektra. Wozzeck I’d like to do again. Any of the other Strausses. Fledermaus. Puccini’s missing. Fanciulla, Rondine. I’d like to do Boris Godunov again.

EM: As far as nineteenth versus twentieth or twenty-first century opera, do you gravitate toward something in particular?

KK: I probably will always gravitate toward the modern by nature. I’d love to do Rake’s Progress.

EM: What about the composers of now - Jake Heggie, Tobias Picker, John Adams?

KK: I absolutely would love to do any of that. Any world premieres. I loved doing Nixon in China at IU. The American minimalists are still popular in Europe at the moment. In Germany we’re also trying to promote German composers, naturally.

EM: Before we wrap up, tell me a bit about your work with youth orchestras. Do you feel it’s an important part of your growth as a conductor to develop future audiences and musicians?

KK: We all give back somehow, and I’m the product of an amazing educational system, so I’m thrilled that people ask me to conduct youth orchestras, that I have something to offer. I’m a product of youth festivals, Germany especially. That’s where I learned the ropes.

EM: Do you feel there’s a difference between youth orchestras in the States and Europe?

KK: No, not ever. They all feel they’re a part of something. I did, too, when I was their age.

EM: I have a feeling a lot is going to happen for you in the future. I can’t wait for Elixir.

KK: Thanks so much.