The Trumpet Shall Sound: Hardenberger at Tanglewood

The program opened with a rousing rendition of the Brahms Third Symphony. Written in 1883, the year of Wagner’s death, this vibrant work, alternately cheerful and reflective, was branded Brahms’s Eroïca by conductor Hans Richter, and came six years after the second symphony, during the year of the composer’s fiftieth birthday celebration. Schumann said of Brahms at age twenty that the youthful composer represented the future of German music. Wagner aficionados took issue with that assessment.

Despite rabid Wagner fans’ efforts to disrupt the premiere, the piece was well received. “The Third strikes me as being artistically the most nearly perfect,” wrote famed critic and Brahms advocate Eduard Hanslick. Indeed, the flow of the Rhine River, which Brahms associated with his beloved mentor Schumann, is felt as deeply in this symphony as in Schumann’s Rhenish Symphony. The aggressive zeal and lyricism of the first movement, the hymn-like meditative calm of the second, the pain and joy expressed in the third, and the initial anguish of the fourth movement ultimately harken back to the lyricism of the first, ending cyclically with Schumannesque tranquility, all of these melding together to give proof to Hanslick’s claim.

Nelsons’ interpretation began by emphasizing the ebullient aspects of the first theme with generous sweeping and soaring gestures, contrasting with the subtle yet precise motions of his baton-less right hand indicating the subtlety needed for the more lyrical second theme. His remarkable ability to show such contrasts continued in the following movements, where he found the exact balance between the work’s many multifaceted characteristics.

A collaboration with internationally recognized trumpet soloist Hardenberger starting in the late 1990s helped pave the way for Martinsson’s works to feature prominently in the international contemporary music scene from New York to Vienna and London to Tokyo. The premiere of Bridge, Trumpet Concerto No. 1, commissioned for the Gothenburg Symphony Orchestra, was an instant success; subsequently Hardenberger has performed the work more than forty times with famed orchestras, including the Berlin Philharmonic. 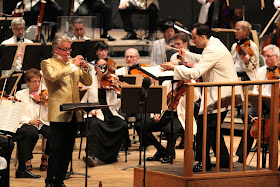 Divided into three larger parts joined by two solo trumpet cadenzas, one lyric and one dramatic, Bridge opens with mysterious rumblings from the percussion and harp, continuing with semi-improvisatory orchestral trumpet chorales. The lively tempi throughout are interspersed with brief lyrical passages, evoking Britten’s Sea Interludes taken to an extreme, highlighted with bits of Elgar and Bernstein as well as avant garde 20th century composers’ works. The virtuosic pyrotechnics of the third movement are reminiscent of some of the most complex, dissonant moments of Strauss’s Frau Ohne Schatten.

Hardenberger, called the “the cleanest, subtlest trumpeter on earth,” undoubtedly is the most virtuosic. His dazzling technique, crystal clear high notes, and piercing tone capable of cutting through the enormous orchestration, reflect his background studying with famed trumpet pedagogue and international soloist Pierre Thibaud at the Paris Conservatoire, who famously championed the music of Pierre Boulez. The work so brilliantly displays Hardenberger’s abilities that it is easy to understand why it was written for him. If Wagner pushed the limits of 19th century tonality, Hardenberger pushes the limits of 21st century trumpet playing. The question is how does he do it? Whatever the answer, Hardenberger impressed the audience mightily as they leapt to their feet in a demonstration of their approval.

Nelsons showed a keen and constant sense of oneness with the soloist. Their close, intuitive connection was absolutely de rigueur for the meticulous cohesion required of Martinsson’s complex orchestration. Nelsons adroitly handled the challenging pyrotechnics required to keep the orchestra, with its full battery of percussion and brass, precisely together, and the magnificent BSO violin section proved up to the challenge of the many soaring high notes required of them.

To match the excitement building around his imminent inauguration as the BSO’s fifteenth music director this coming season, Nelsons programmed one of Tchaikovsky's most vivacious works, the Capriccio Italien, which Tchaikovsky penned during a visit to Rome. Despite its being written in one of the composer’s darkest periods of deep personal turmoil, this work remains one of the most upbeat in his oeuvre. Originally titled “Italian Fantasia,” the Capriccio belies Tchaikovsky’s anguish over the recent death of his father and the ever-present specter of his homosexuality, by evoking the joviality of the Roman Carnival taking place at the time.

This kind of repertoire is tailor made to capture the BSO’s own particular virtuosity. The brass fanfare, the Italian folk tunes and street songs, the lively tarantella or cicuzza, all sparkled under Nelsons’ baton and his musicians’ brilliant artistry. The match between the tried-and-true ensemble and their newly minted music director should prove to be prolific indeed. 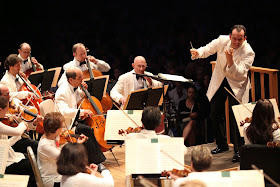