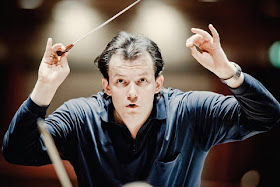 Many of us feel a special connection to one specific composer whose music has had a significant impact on our lives. For Boston Symphony Orchestra Music Director Andris Nelsons, Dmitri Shostakovich represents that paradigm.

Nelsons’ reasons are manifold. He cites his own personal history, growing up in the former Soviet Union, as one major reason for his close link to the 20th century Russian composer. Nelsons studied conducting in St. Petersburg, Shostakovich’s birthplace. Perhaps most meaningfully, Nelsons feels that the composer’s shy, quiet character closely resembles his own and that he identifies with the composer “in a mystical way.”

Whatever his motivations, Nelsons has taken up the cause of the symphonies Shostakovich wrote during the regime of Joseph Stalin as his own personal quest: a mission to disseminate the deep meaning of these compositions as widely as possible. He has made a stunning beginning to his CD series, “Shostakovich Under Stalin’s Shadow,” with a newly minted CD of live performances with the BSO for DG of Symphony No. 10 in E Minor, op. 93, coupled with the Passacaglia from composer’s controversial opera, Lady Macbeth of Mtsensk.

Stalin publicly denounced the opera as “coarse, primitive and vulgar” and censured the composer for creating a score that was purposely dissonant and muddled. This disapprobation was a pivotal event in the composer’s life, as suddenly he found not only his career threatened but also his life. The compositions that followed embodied his disillusionment with communism and its canons.

The opera’s Passacaglia is the lengthiest of four orchestral interludes, which, as in Peter Grimes, symbolize the brooding nature of the story on which they are based. From its very first violently jarring chords, the piece reflects the ghastliness of the events that take place during the opera as well as Shostakovich’s dark vision of the story’s world. Nelsons, whose recording of the Sibelius Symphony No. 2 (http://www.laopus.com/2015/09/cd-review-andris-nelsons-conducts.html) displayed impressive cognizance of the personality contrasts inherent in that composer, showed an equally remarkable grasp of the psychic pain that Shostakovich drew upon to portray the agonies of the story’s characters.

Maestro Nelsons mines the power of the BSO brass and winds to the hilt to depict that fierceness, then elicits darkly menacing growls from the lower strings and draws out the lushness of the upper strings as the passacaglia builds. Hints of the composer’s fifth symphony yet to come are beautifully brought out with the dovetailing of full strings, winds, brass and percussion. Stretching the phrases toward the inexorable climax, Nelsons leaves the listener spent, hanging on the final, anguished pianissimo sighs.

The sense of freedom Shostakovich felt in creating his tenth symphony 16 years later allowed him to paint a portrait of Stalin, a now-deceased despotic leader whose ominous presence was still felt even after his death. The opening of the first movement Moderato continues the foreboding atmosphere of the previous Passacaglia. Again Nelsons encourages the strings to pour out their passion slowly and poignantly, with full emotion, mirroring the intensity of the first movement of Symphony No. 5, deftly weaving in a sinuous flute embellishment and introspective melodies from the clarinet and bassoon and utilizing the full forces of orchestra to build the tension, evoking a melody from the fourth movement of the aforementioned Sibelius symphony.

Nelsons crisply brings out the military nature of the aggressive second movement Allegro with its characteristic Shostakovich snare drum pitted against the strings, violins displaying deceptively easy virtuosity in the rapid, frantic runs in a precipitous rush to the end. In the Allegretto third movement Nelsons plumbs the textural subtleties of each individual orchestral section, intertwining humor with aggression, as if preparing for the final push to the fourth movement finale, whose brooding character continues with the Andante, which begins with gorgeously played oboe and flute solos. Again Nelsons creates a mysterious atmosphere reflecting the ever present trepidation that hung in the air even though the feared, domineering leader was no longer alive. But Nelsons clearly comprehends the significance of the lively interplay in the ensuing Allegro section, which ends on a life affirming note: sardonic rather than optimistic, but still upholding the composer’s firm knowledge that he is finally free to express his creativity as he chooses without the yolk of the leader’s stranglehold. The clouds part, and the world looks ever brighter.

As always, the orchestra sounds magnificent. Nelsons has a distinct vision as to how to bring the superb Boston sound to the surface. As his relationship with the ensemble grows closer and even more refined, together they will be unstoppable.

Future releases in this series with the BSO on DG will feature two CDs: Symphonies Nos. 5, 8 and 9 and Nos. 6 and 7.