A Trio of Piano Quintets at Rancho Palos Verdes

Four days into December and, with snowmen and Santas alighting in front yards and Christmas carols and chunks of Messiah invading concert halls, here was a concert in a church with nary a nut being cracked, nor a tinkle of tinsel, nor a Hallelujah! to be heard. Indeed, one wondered whether, as the name of the Thies Consort implied a variegated and variable line-up, three piano quintets with no leavening might not be a touch too rigorously undifferentiated a program. But no, Robert Thies (piano) and his colleagues Elizabeth Hedman, Jessica Guideri (violins), Shawn Mann (viola) and Jacob Braun (cello) had been much too canny in their planning for that.

In the absence of program notes (available on the SBCMS website, but regrettably not in the printed hand-outs), Mr Thies gave engaging spoken introductions to each work in turn, prefacing the performance of Robert Schumann’s Piano Quintet in E flat major, Op. 44, by noting that with it Schumann effectively invented the form, as it has become conventionally known, by adding piano to the string quartet of two violins, viola and cello that was already the vehicle for many of the Classical and early Romantic eras’ most profound inspirations. He also registered the debt that its fertile invention owed to the influence and inspiration of his then new wife, Clara, and to the intervention of Felix Mendelssohn in some structural matters. As to the performance itself, this hewed to a tightly dramatic conception, with the omission (unless my ears deceived me) of the exposition repeat in the opening Allegro brillante movement (no lack of brillante here) adding to its impression of driven brevity.

The ensuing In Modo d'una Marcia, though quite slow, underplayed its funereal aspect by making the separated notes of the opening motif almost staccato. This, added to the Pacific Unitarian’s quite dry acoustic for a church, gave an emotional effect more numb than lamenting, but then the Thies Consort really played for all its emotional worth the turning-point into the movement’s Agitato central section. In the Scherzo, the first of the two trio sections was delicately contrasted with the opening upward-rushing scales, while after the scherzo repetition, the second trio scurried purposefully. Then in the Finale, the vigorous voice-leading of the fugal entries in the cyclic joining of its own main theme with that of the first movement – a structural tour de force said to have been inspired by Mendelssohn – typified the way in which the ensemble playing got better and better throughout the performance. So far, so excellent.

Onwards 70 years or so to the 1914 Piano Quintet No. 2 in E flat minor, Op 26, by the Hungarian Ernö Dohnányi (1877–1960) (above), usually regarded (if he is thought about at all other than as the father of the conductor Christoph von Dohnányi) as a “one-work composer” – though sadly even that one work, his Variations on a Nursery Tune Op. 25, seems largely to have disappeared from concert halls. Hearing other pieces by such figures more often than not makes one regret their disappearance rather than confirming posterity’s judgment, and this was certainly the case here. Robert Thies’ introduction clarified some reasons for the neglect of Dohnányi’s music. As well as a composer he was also a pianist and conductor and, from 1934 onwards, Director of the Budapest Academy of Music. In these roles his assiduous promotion and performance of other composers’ music was at the expense of his own, and later during the Nazi era he was the supporter and even savior of Jewish musicians who came under his jurisdiction. Under these circumstances it’s perhaps not surprising that his works never had much of a chance to shine, nor that his output was not large despite his composing career extending over some 60 years. 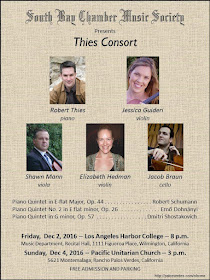 This performance of his second piano quintet confirmed that Dohnányi is more than a one-work composer whose other works, beginning with this one, don’t deserve oblivion. Memorable and powerful from the first bar to the last, with its portentous opening theme cyclically returning at the end of the finale (as with the Schumann, testifying again to the Thies Consort’s skillful program-building), this forgotten masterpiece could easily be heard to reflect the uncertainties and portents of a world on the brink of its first global war, the halting waltz that opens the second of the three movements seeming like a nostalgic, even haunted echo of more settled times lost forever.

Finally, after the interval, we had Dimitri Shostakovich’s single Piano Quintet in G minor, Op. 57. In contrast to Dohnányi, the Soviet composer is a frequent presence in concert halls, and this is one of the most familiar works in his voluminous corpus of chamber music. Like the Dohnányi, it was written in the shadow of world war, but around a generation later. Robert Thies pulled no punches in his outline of Shostakovich’s extraordinary career – decades of ducking and diving in response to the brutal dictates, artistic and otherwise, of the regime, and still delivering a very extensive and many-sided life-work that is impossible to encapsulate simply as reaction.

The Quintet’s five-movement arch form opens with a brief Prelude, heralded by declamatory chords on the piano and powerful uniform strings that then alternate with more apparently playful music. This forms an introduction to the succeeding Fugue: Adagio, much the longest movement, where the long lines were played with minimal vibrato, adding to the sense of time suspended and Shostakovich’s extraordinary ability to convey tranquility and unease simultaneously. The coping stone of the arch is a short Scherzo: Allegretto, in which chunky peasantish stamping and skirling banalities swirl in and out of dissonances like a barely-controlled automobile scraping crash barriers. After this near-hysteria, the Intermezzo: Lento, returns to the mood of the Fugue, with lonely violin lines weaving against the steady, almost Bachian tread of cello pizzicati, before the movement elides without a break into the almost-amiable Finale: Allegretto, ending in not-quite tranquility.

No composer is more characterized by emotional ambiguity than Shostakovich, and the Thies Consort’s ability to encompass the many turn-on-a-dime changes of mood in this masterpiece was a tribute both to their skill as performers and to the composer’s genius. This long program, demanding for performers and audience alike, made me for one look forward eagerly to future concerts by this ensemble.

If you found this review to be useful, interesting, or informative, please feel free to Buy Me A Coffee!
David J Brown