Blustering Pirates dominated San Diego’s Civic Center Plaza and overflowed onto the Civic Theatre stage in San Diego Opera’s Oct. 14 engaging season opener, Gilbert and Sullivan’s perennially pleasing The Pirates of Penzance. Brimming over with a cast of operatic virtuosi and awash with clever, eye-catching sets and costumes originally created for Opera Theatre of Saint Louis, the gleaming production enlivened the hall from start to finish. The addition of a few timely bits, including a not-so-subtle reference to such current phrases as “covfefe,” contributed extra laughs to the overall comic effect.

As the Pirate King, bass-baritone Greer Grimsley was without doubt a bit of luxury casting. Known for his heavy Wagnerian roles - e.g., a recent Flying Dutchman in Seattle and Wotan in San Francisco Opera’s upcoming Ring - Grimsley was last seen at SDO as the seriously villainous Scarpia in Tosca. The singer’s status as an SDO favorite was further enhanced by his portrayal of Gilbert & Sullivan’s comically villainous pirate chief. The very epitome of swashbuckling, Grimsley thrust and parried his way through the well-populated stage full of pirates, maidens and police academy rejects, seemingly without breaking a sweat. Vocally, his powerful instrument twinkled and flashed, with its usual impressive consistency.

In partnership with her real-life husband for the first time on the SDO stage, mezzo-soprano Luretta Bybee provided nonstop laughs with her over-the-top characterization of the “Piratical Maid,” while giving a vocally solid performance that showed both depth and power. Her Cockney accent was authentic, spot on, and exceedingly amusing.

The Bybee-Grimsley couple frequently perform as a stage duo, and it shows. Their scenes together scintillated; in fact, their “paradox” number was so convincing in its tongue-in-cheek, mock malevolence that one almost expected a Sweeney Todd moment to follow (they have performed together previously as Mrs. Lovett and the title character).

Young tenor Mackenzie Whitney showed great promise as the steadfast Frederic. His sincere portrayal of the naïve, lovesick apprentice was winning, and though it took him a bit of adjustment in his upper notes for the opening numbers, by the second act he settled into pleasing tones and was in top form.

As Major-General Stanley, Patrick Carfizzi drew a steady stream of guffaws from the audience. The comically gifted bass-baritone displayed an endless repertoire of physical pratfalls and light-stepped dance moves that kept viewers in stitches in his every onstage appearance. His hysterical, virtuoso “modern Major-General” patter was so rapid that the above-the-stage surtitles barely kept up with him.

Having witnessed soprano Maureen McKay’s luminescent Nanetta in last season’s SDO Falstaff, it was even more pleasurable to hear the full capabilities of her lyric coloratura in the role of Fredric’s heartthrob, Mabel. Though the difficulties of this character’s vocal pyrotechnics are often underestimated. McKay dazzled with her vocal beauty and dashed off the fioratura in true Beverly Sills fashion.

Director Seán Curran deserves much praise for his sparkling Vaudevillian charm and wit. The antics through which he put his singers were at once enthralling and adorable in scene after scene. The performers played up the slapstick humor to the hilt, often bordering on camp but never going over the edge of good humorous taste. The stage was always active but not overly busy, the actors gutsy but campy only when necessary; and in true Barber of Seville fashion, the Police force shtick drew belly laughs from the audience at every entrance and exit.

Conductor Evan Rogister made a truly striking company debut. Rarely has this writer heard the company’s orchestra sound better. Rogister’s lively tempo at the beginning of the overture set the tone for the entire performance. Attacks and releases were impressively together. The string sound especially was smooth and refined. His lively, expressive beat showed great understanding of style. Rogister has all the equipment required to reach star status as an opera conductor.

Bruce Stasyna’s chorus showed their singing chops to spectacular effect, even in the throes of the most active comically physical challenges. The authenticity of the various enunciations could have been a bit more consistent overall, but the singers stepped up to the challenge.

Bringing British operetta to the SDO stage may have been a calculated risk on the company’s part, but their boldness in programming pays off in this highly entertaining evening of rib-tickling and swagger. 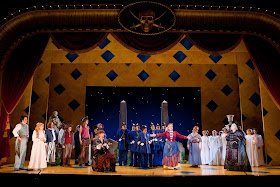