Return to the Mountaintop 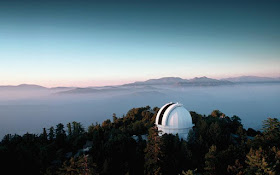 
[Apologies to Mount Wilson Observatory, and to the performers, for the late posting of this review.]

Yes, I know there are some Los Angeles Philharmonic and other orchestral concerts amongst the Hollywood Bowl’s summer attractions, but if you’re looking for music that’s both smaller-scale and more out-of-the-way (in both senses), get yourself up to that other bowl in the San Gabriel Mountains, the inverted steel one that encloses Mount Wilson’s 100-inch telescope and which, on the first Sunday afternoon of every month from May to October, provides (now for the second year running) Southern California’s most distinctive music venue.

I’ve a hunch that even with familiarity the thrill is never quite going to go away: after the long, twisting drive up the mountain you get the first glimpse of the great white dome in the distance and then, once parked and with the further half-mile walk uphill behind you (now slightly breathless from the near 6000-foot altitude), you reach the theatrical scene-setting inside. Climbing precipitous metal staircases to the observing floor brings you, now really out of breath, to the seating in semi-gloom… and then the dome aperture rumbles apart, light streams into the space, and with scarcely a sound or sense of movement, the whole dome/floor assembly, carrying the audience with it, slowly revolves into position. What a location!

And so to the music, courtesy of Dan Kohne, Mount Wilson Institute Board of Trustees member and de facto director of development, and Cécilia Tsan, Artistic Director for these summer seasons and principal ‘cellist of the Long Beach Symphony. In this first concert she was joined by Roger Wilkie, the LBSO’s concertmaster, and harpist Marcia Dickstein, around whose instrument the program very much was constructed. First up were two 20th century French works, the Trio for Violin, Cello and Harp by Jacques Ibert and Saint-Saëns’ Fantaisie for Violin and Harp Op.124.

The first movement of Ibert’s Trio, composed in 1944, has a strong unison opening from all three instruments: energetic, slightly unstable rhythmically due to its alternation of 6/8 and 7/8 measures, but of unclouded amiability (as indicated in the unusual marking Allegro tranquillo). It encloses a gentle, slower, middle section introduced by the harp, and this lyrical aspect is deepened in the exquisite slow movement, where a long and rapturously beautiful melody, first introduced by the ‘cello, is sung in increasingly ecstatic flights by the two stringed instruments against rapid dolcissimo chords on the harp. A short Scherzando con moto finale brings the work back to earth, but with the most thistledown of touchdowns.

Saint-Saëns wrote his Fantaisie in 1907 at the age of 72 – fairly late in, but by no means near the end of, his very long career. Despite his already huge compositional output, the work carries not the faintest whiff of staleness; rather it sounds the work of a master composing purely for pleasure, to which Mr. Wilkie and Ms. Dickstein responded eloquently. The Fantaisie’s five clearly delineated but linked sections flow without apparent effort each into the next, entirely side-stepping any hint of sonata-form though with a return near the conclusion to the opening melodic exchange between the two instruments, to tie the structural knot.

Max Bruch’s Kol Nidrei Op.47 was originally composed as an Adagio on two Hebrew Melodies for cello and orchestra with harp, but has subsequently appeared in various versions. On this occasion Ms. Dickstein’s own arrangement for harp of the piano part in the ‘cello + piano edition rendered the accompaniment yet more plangent and soulful, while Ms. Tsan’s deeply felt account of the solo spoke eloquently of her long association with the work, she having played it for 13 consecutive years for Yom Kippur in the same Long Beach synagogue.

Last came the Trio “Bi”, dedicated to Ms. Dickstein, by the contemporary West Coast movie and concert composer Bruce Broughton. According to his own program note, “the term ‘Bi’ simply means ‘two’. As used in this piece, the word refers to the two different performance methods used in stringed instruments: bowing and plucking (bi-functional); to the two movements (bipartite); and more specifically to the use of two scales concurrently (bi-modal).”

The slow, intense first movement was characterized by high violin harmonics, as if emerging from and then returning to stasis, as well as by strong arching unisons for both strings. Being quite short, it really acted as a prelude to the longer “Restless, but not too fast” second movement where the composer employs a wide range of playing techniques for all three instruments. It builds into a kind of moto perpetuo that keeps threatening to finish, but instead cranks up into yet higher a gear, so that in conjunction with the pervasive 3/4 time the effect brought to my mind’s eye (from a movie that Mr. Broughton was not around to score!) the nightmarish waltz as directed by “Mr. Scratch” in The Devil and Daniel Webster.

This was a terrific start to the new season at Mount Wilson: to come are music for brass quintet on June 3, string sextets on July 1, string quartets on August 5, jazz on September 2, and to conclude, more string quartets (two of the greatest, by Schubert and Debussy) on October 7: details at the concert web page or by emailing [email protected]

If you found this review enjoyable, interesting, or informative, please feel free to Buy Me A Coffee!
David J Brown