While details of inclusion or exclusion can always be nitpicked, this concert – the second in the PSO’s ambitious 40th anniversary season – was surely one of the most comprehensive and insightfully programmed of the many devoted entirely to the music of Leonard Bernstein during the ongoing centennial juggernaut. And it was made all the more significant and, indeed, moving by Carl St. Clair’s recollections from the platform of his personal association with "Mr. B" over the last six years of the composer's life, as was also documented fully in his interview with Timothy Mangan earlier this year on the PSO blog.

The program got off to a hyper-energized start with the 1949 Prelude, Fugue, and Riffs for solo clarinet and jazz ensemble. I did wonder – as smoochy glissandi on three muted trumpets followed the Prelude’s opening snap on the other two trumpets, trombone quartet, bass drum and double bass – whether the Segerstrom Concert Hall was just too big, and its acoustic too cool and analytical, for such intimate, smoky music, but I was persuaded by the clarity it imparted to the Fugue for quintet of saxophones that followed after a blink-and-you-miss-it transition, and then the sheer impact of the final Riffs "for Everyone" (as specified in the score).

Bernstein makes his featured solo clarinet wait until this last of the three brief movements, but Pacific Symphony principal Joseph Morris seized his moment when it came and joined “Everyone” in a viscerally exciting conclusion under Carl St. Clair’s baton. Aside from the sheer ripsnorting brilliance of the performance, it was a reminder of the uncanny skill with which Bernstein could capture and precisely notate music that is really antithetical to notation – the free improvisatory spirit of jazz. When the underlying lyrical impulse of so much of his music is so familiar, it was good to be recalled again to this contrasting aspect of his mastery.


The program note’s claim that the Serenade (after Plato’s “Symposium”) is “actually a violin concerto in five movements” was fine if you simply define a concerto as a work for soloist and orchestra, but the writer’s later speculation that Bernstein may have been “shy of the showiness behind that loaded word ‘concerto’” was surely also spot-on.

In an illuminating pre-concert interview with PSO host Alan Chapman, Augustin Hadelich, the soloist for the performance, remarked how difficult the solo part was to articulate, and how in this work technique had very much to be in the service of its spirit (he also noted that reading the Symposium had not been very useful as a guide to the piece!). Bernstein himself wrote: “There is no literal program for this Serenade, despite the fact that it resulted from a re-reading of Plato's charming dialogue, ‘The Symposium.’ The music, like the dialogue, is a series of related statements in praise of love […]”

The soloist, conductor, and PSO harp, percussion and strings (their strength reduced to around 8-8-6-6-2) gave a slightly understated, but intelligently thought-through and integrated account of the Serenade. The most recent live performance of it that I heard had given much prominence to the soloist, but here Mr. Hadelich’s unaccompanied Lento start to the initial, “Phaedrus”, section of the first movement was as the almost hesitant and even reverential initiator of a conversation that continued seamlessly into its main “Pausinius” Allegro.

So skillfully did the performers maintain line and continuity throughout the remaining four movements that one was more conscious of an underlying commonality of mood than of the actual, and considerable, contrasts between them. But there was no under-characterizing of the wry delicacy of the ensuing Allegretto “Aristophanes”, or of the brief “Erixymachos” Presto's mysterious scurrying, or indeed the chaste, songful beauty of the “Agathon” Adagio.

The unison strings opening to the bipartite “Socrates: Alcibiades” finale was dramatically impassioned, and out of its weighty sfffz climax Mr. Hadelich's violin emerged, wonderfully self-effacing as ever, to engage in probing conversation with the principal ‘cello. Then the Allegro molto vivace of the concluding “Alcibiades” section began. In that previous performance the sudden levity of this had jolted the wrong way for me, but here a relatively steady tempo with no exaggerated raucousness made for a convincing conclusion to the whole work, broadening and lightening its overall mood rather than rudely puncturing it.

After the interval, the strings – now up to full strength and with the addition of brass, percussion, and two harps – were joined by the 120-strong Pacific Chorale for Chichester Psalms, written in 1965, a decade on from the Serenade, and surely one of the most successful of all Bernstein’s purely concert works in its memorability, range and concision.

Between the compulsively rhythmic and frequently dissonant first movement and the extended, warmly consolatory finale, Bernstein’s sublime setting of Psalm 23 is framed like a jewel, with one of the most radiant melodies he ever wrote entrusted to a male alto, the part here taken by 12-year-old Angel Garcia.

Bernstein makes what is already a challenging entry for the soloist – in low register and unaccompanied apart from off-beat harp chords –  even more so by his instruction to sing semplice senza cresc. o dim. (non-sentimentally), but Angel almost managed it, apart from sounding a little hard and forced at first. On his return after the movement’s choral Allegro feroce central section, he sounded rather more secure.

Throughout the work, the Pacific Chorale achieved the widest expressive range, from the ferocity in that movement and elsewhere to the exquisitely hushed (pppp – count ‘em!) Amen conclusion. In the outer movements the brief SATB solos were taken by Chelsea Claves, Jane Hyun-Jung Shim, Nicholas Preston and Matthew Kellaway from the Pacific Chorale’s ranks.

Last came five vocal items, in which soprano Celena Shafer was very much the star. I was sorry that timing only allowed for two of the six songs from Arias and Barcarolles (Nos. V “Greeting” and III “Little Smary”, in that order), and here I have my only criticism of the program – either none at all or the entire work, Bernstein’s last, composed in 1988, would have been better. These two songs in isolation made only a fragmentary impression, despite maestro St. Clair’s touching reminiscence of his conversation with the composer’s mother, Jennie Bernstein, about her text for “Little Smary.”

Ms. Shafer followed this with a juicily histrionic rendition of “A Little Bit in Love” from the two-act 1953 musical Wonderful Town, and then upped the ante with a positively gymnastic performance of “Glitter and Be Gay” from Bernstein’s subsequent operetta Candide, climaxed by an ascent to the top of the tall, narrow stool she had been using as a stage prop that swung one’s attention away from her marvelous vocal pyrotechnics to the security of her balance – but she triumphed here as elsewhere.

Finally she was joined by tenor Nicholas Preston and the Pacific Chorale in a fervent account of the final number from Candide – “Make Your Garden Grow” indeed! Mr. B could certainly write them, and this whole concert was a vibrant and memorable tribute to his enduring genius, his inclusiveness, and his lifelong belief in the enriching power of music. 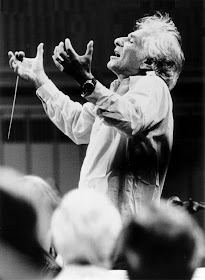