Brazilian Recorders at "The Interludes"


The fact that the South Bay has several chamber music series, most of them master-minded by Jim Eninger, means that—like the weather in New England—if whatever is current is not to your taste, then just wait as something different will be along shortly. And usually that something different is really different…

I don’t know about in America, but way back when I was in post-war English primary school the last resort of hopeful music-teachers faced with a class of terminally unmusical kids was to hand out an armful of treble recorders and hope for the best. As one of those kids, it was quite a few years before I realized that those wayward plastic whistles had larger, deeper, and more respectable cousins, but I’d not comprehended quite the sheer range of instrument types and sounds that come under the heading “recorder” until last Saturday’s recital in Classical Crossroads’ “The Interludes” series by the Brazilian group Quinta Essentia.

After the first couple of items, by the Brazilian contemporary Daniel Wolff (b. 1967) and his countryman from an earlier generation Radamés Gnattali (1906-1988) (yes, he was named after that character in Aida), Gustavo de Francisco as spokesperson for Quinta Essentia explained about the unusual square cross-section of their largest recorders. These were the invention of a mid-20th century German recorder builder named Joachim Paetzold, who modeled his innovatory design on square wooden organ-pipes, with keys so that they could be played over two octaves.

The extraordinarily deep, woody sound of these instruments featured in all nine of the works (all Brazilian) included in the recital, though in the first, Wolff’s Flautata Doce composed in 2013, light cheerful dance rhythms rather than particular timbres dominated the outer parts of its aural landscape, enclosing a cool, slower central section of arching melody on the treble recorder.

Unlike those of his older contemporary, Heitor Villa-Lobos, Gnattali’s music and reputation seem not to have traveled much beyond Brazil, and this was my first encounter with his music.

His affinity with dance rhythms was everywhere apparent. The brief Lenda (Legend) from 1936 that followed the Wolff laid in flourishes of brilliant tone-color alongside lugubrious close-packed harmonies and a wayward melodic line on tenor recorder, all over a foundation of basso burblings on the big Paetzold instruments. In his 1930 Seresta (Serenade) No. 1, the samba came specifically to the fore as the work’s subtitle, though the piece also included some surprising dissonances.

The three works by Villa-Lobos in the program were all arrangements for recorder ensemble by Senhor de Francisco. First up was the familiar “Ária” that is the first of his 1938 Bachianas Brasileiras No. 5’s two movements. This was an interesting experiment, but not one that I would look forward to hearing again in preference to Villa-Lobos’s original scoring for wordless soprano and an orchestra of ‘cellos.

Even more extensive and bewilderingly wide-ranging in style, scale and scoring than the Bachianas Brasileiras is Villa-Lobos’ earlier series of Choros, ranging from the colossal Choros No. 11 for piano and orchestra, which out-bulks any piano concerto in the repertoire apart from the one by Busoni, down to small single-movement pieces like the Choros No. 4 from 1926, originally scored for three horns and trombone.

Choros No. 4 segues from cool contrapuntal musings to a kind of village dance-band tune, and to my ears worked just as well on recorders as on brass. The same was even more true of A lenda de caboclo (1920), its dreamy, repetitive melody even more hypnotically drowsy as breathed through the recorders than in its original keyboard form.

Quinta Essentia played no less than five works by Gnattali, of which the most extensive—indeed the largest piece in the whole recital—was his four-movement Quartet No. 3 (1963).

Here I felt that the string quartet original might have given more of an insight into this composer’s sound-world than Senhor de Francisco’s transcription, though maybe I should have spent less time trying to envisage on four stringed instruments its progression from staccato playfulness in the first movement, through angular high-flying tango in the second, a wayward solo against insistent triple-time rhythms in the third, and back to airborne staccatos in the finale, and instead simply enjoyed the timbres on offer, from the piercing treble to the extraordinary depths emanating from the contrabass.

I’m not sure whether Gnattali’s short Cantilena from 1939 that immediately preceded the quartet, or his Seresta No. 2 (1932) that closed the recital, were transcriptions or not. Either way however, the recorder quartet conveyed with equal vividness the arid, haunting mood of the first (apparently a lament from the desert area in the north-east of Brazil), and the alternately chirpy and boozy wit of the latter. 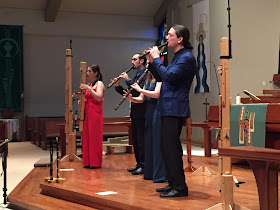 This was a fascinating recital, though I confess that by the end of around an hour and a quarter’s continuous music my ears were growing a little tired of undifferentiated recorder tone, however skillfully played; maybe it would have been better to omit one or two of the pieces.

What was not at issue was the disarming charm of Quinta Essentia who clearly as much love their instruments as they are adept at playing them (the "quinta" in their name refers to the four players plus the recorder!). To round everything off came perhaps the most charming touch of all, in which Senhora Pereira called out her three companions in turn by name, while they repeated again and again the inimitable chugging rhythms of the Brazilian folksong transcription that formed their encore.