Former LA Phil Music Director André Previn, at one time a fixture on the Los Angeles music scene, has died in New York City. He may have been born in Berlin, which his family fled during the Nazi era, but Previn became closely associated with Los Angeles in his early professional life as a film composer and jazz pianist, much later as Music Director of the LA Philharmonic. Two obituaries, one from the LA Phil and the other the London Symphony Orchestra, cover his significant musical contributions on two continents.

I met only him a few times, but at each encounter he was kind, interesting, and witty. Here now a brief personal recollection of an evening spent with him:

Decades ago, as Deputy Director of the L.A. City Cultural Affairs Department, I presented a City of Los Angeles proclamation to Previn as part of a celebration of his birthday by the USC Friends of Music. The schedule had me giving the proclamation first. When that was done, the maestro bounded to the podium and gave what amounted to an acceptance speech, full of lively musical anecdotes, and spiced with self-deprecating humor.

Unfortunately, Previn had not been informed that the Dean of the USC School of Music had prepared a long recitation of his life accomplishments, obviously to be delivered before that acceptance speech. After an awkward moment, the Dean went into his elevated praise. Though well delivered, it proved anti-climactic after Previn's light-hearted banter. No matter. Everyone appreciated the good intentions and Previn's amusing remarks.

What may have been Previn's last significant professional statement is recorded in the just released two-book publication -- "The LA Phil at 100" -- where music critic Tim Page interviews all the then living music directors of the LA Phil's first century of activity. That publication is available at the downtown LA Phil Store, on the ground-floor lobby of Disney Hall, with free public entry to all. (When you open the website link, scroll down for the book display.)

Addendum: Our colleague David Mermelstein's excellent obituary of André Previn in the Wall Street Journal has just been received and is now included below in full.

A child prodigy whose family fled Nazi Germany achieved fame with Hollywood musicals, European orchestras and in the world of jazz 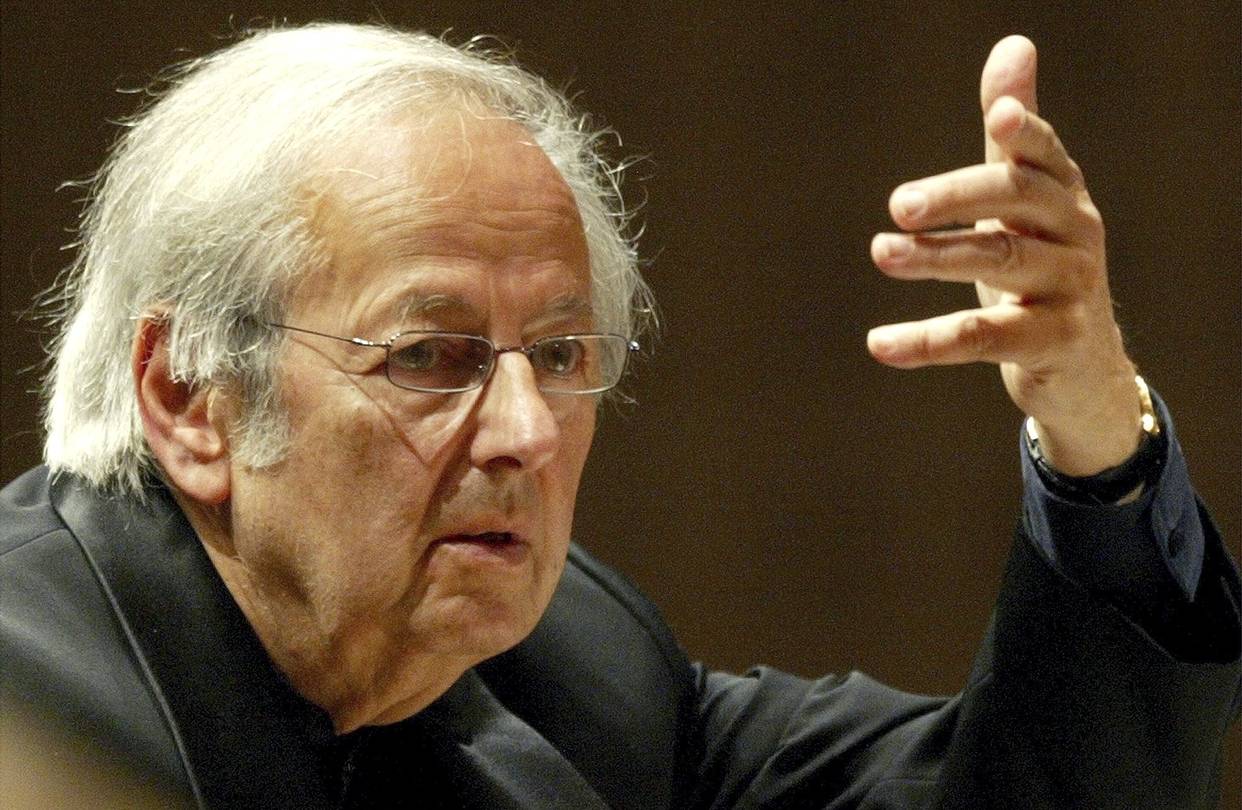 André Previn, among the 20th century’s most redoubtable musicians and certainly one of its most versatile, missed two enviable milestones in dying today. In April, he would have turned 90, and in October the Los Angeles Philharmonic was scheduled to present a new work it had commissioned from him, intended as a highlight of its centennial celebrations. No less important, that premiere would have served as something of a public apology for the Philharmonic’s unceremonious treatment of Mr. Previn in the late 1980s, when he was the orchestra’s ninth music director.

His tenure, from 1985 to 1989, was unexpectedly brief, thanks to a power struggle that resulted in his resignation and the elevation of Esa-Pekka Salonen to the job. It rivals in embarrassment an incident in the early 1960s when Georg Solti hastily departed the Philharmonic as music director designate after a conflict with the orchestra’s lead patron.

Mr. Previn could be a dutiful, rather than inspired, conductor, and his slouchy, matter-of-fact podium manner was far from dazzling. But when sufficiently motivated—especially by British composers like Elgar, Vaughan Williams and William Walton; French Impressionists like Debussy and Ravel; Russian Romantics like Tchaikovsky and Rachmaninoff; and midcentury American modernists like Harold Shapero—he could enthrall audiences with his grasp of structure, flair for tonal coloring, and fierce commitment.

His assumption of the music directorship in Los Angeles seemed both unlikely and predestined. The Berlin-born Previn, the son of a lawyer and later judge, fled the Nazis with his family and relocated to Los Angeles, where Charles Previn, a second cousin once removed, was a film composer and arranger at Universal. A career in film music for the musically (and otherwise) gifted André seemed logical and convenient, and he became something of a wunderkind in Hollywood. By 1951 he had reaped his first Oscar nomination—12 more would follow, with consecutive wins for scoring in 1959 and 1960 (“Gigi” and “Porgy and Bess”) and in 1964 and 1965 (“Irma La Douce” and “My Fair Lady”). His last nomination came in 1974, for the adaptation of “Jesus Christ Superstar,” but by then he had largely left Hollywood behind.

No Tinseltown hack, Mr. Previn had studied music with luminaries like Ernst Toch and Mario Castelnuovo-Tedesco (also refugees from European fascism), and while serving in the Army in 1950 he took private lessons from the great conductor Pierre Monteux, then music director of the San Francisco Symphony. Parallel to his studies and advances in classical music, Mr. Previn began distinguishing himself in jazz, mostly as a deft pianist and arranger who attracted the company of several of the era’s best-known sidemen, including the drummer Shelly Manne and the bassists Red Mitchell and Ray Brown.

But the power of a full symphony orchestra, and his desire to compose for it—and later for the opera house—drew him increasingly toward classical music. His official debut came in St. Louis in 1962, and by 1967 he was chief conductor of the Houston Symphony Orchestra. His leap to the big time came with his surprise appointment as principal conductor of the London Symphony Orchestra, where his 11-year tenure (1968 to 1979) remains the longest in that ensemble’s storied history and arguably its artistic pinnacle. He returned to the U.S. in 1976 as music director of the Pittsburgh Symphony, bringing it renewed renown and respect through 1985 (perhaps most especially in a sustained musical partnership with the violinist Itzhak Perlman). He then succeeded the revered and austere Carlo Mario Giulini as music director in Los Angeles.

Mr. Previn’s love life—he was married five times—was much discussed in the gossip pages, but he understandably preferred avoiding comment and was known to respond to journalists with stony silence when the topic was raised; some found their interviews concluded on the spot. His marriage to Mia Farrow, in her pre-Woody Allen days, only complicated matters as the years progressed. But some evidence of his romantic affections could be found in his music. His final marriage, to the celebrated violinist Anne-Sophie Mutter, lasted only four years (2002 to 2006), but thanks to their amicable split bore impressive musical fruit virtually to the end of his life. His Violin Concerto, from 2001 and titled “Anne-Sophie,” essentially a valentine to Ms. Mutter, remains among his finest works and should, with its Korngold-like lyricism, endure beyond them both.

Perhaps because of his protean abilities, Mr. Previn was viewed with some suspicion in various musical circles. The work, though, speaks for itself, and music lovers of many stripes will continue to be impressed well into the future by his skills—while listening to his best jazz records, performing his intelligently crafted scores, or enjoying his many outstanding performances of the classical repertory, especially the symphonies of Vaughan Williams, assorted Rachmaninoff works, and the best-known compositions of Gershwin. In this regard, Mr. Previn did live to see a rare honor: Last November, Sony Classical released all of his RCA and Columbia recordings in a 54-CD box titled “Classic Previn.” The set should quell any doubts about Mr. Previn’s importance in the musical life of the 20th century.

—Mr. Mermelstein writes for the Wall Street Journal on classical music and film.