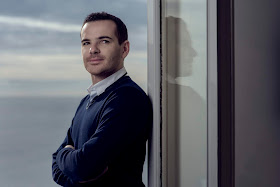 LA Philharmonic assistant conductor Lionel Bringuier combines Gallic expertise with American insights in a four-concert series with the orchestra on March 28-31 in a program mingling Gershwin’s Cuban Overture and An American in Paris with Ravel’s Valses nobles et sentimentales and Piano Concerto in G, with soloist Hélène Grimaud.

Bringuier’s youthful age belies his already vast musical maturity and experience. Recipient of numerous prestigious awards from the French government, he was named the youngest ever Assistant Conductor of the LA Philharmonic in 2007 at the age of 20. He counts the London Symphony Orchestra, Royal Philharmonic, Staatskapelle Dresden and Cleveland and Chicago Symphony Orchestras among the cadre of ensembles with which he has appeared, and recently was re-engaged by the Royal Swedish Opera to helm a new production of Verdi’s Rigoletto.

Erica Miner: Among the mentors in your conducting studies, is there one in particular who most influenced and impacted your career journey?

Lionel Bringuier: Yes, absolutely. As a student at the Paris Conservatory, I had a few different influences. One of them was Zsolt Nagy, who is from the Hungarian school, which is why I love to conduct composers like Bartók and Ligety. The other is Péter Eötvös, who was his teacher. As a student in Paris, I got a lot of influence from Pierre Boulez, who I was fortunate enough to meet a few times, and who said to always trust the score and what the composer wanted and to build the interpretation from there. I was also going to many rehearsals at the Orchestre National de France, where they had fantastic guest conductors such as Riccardo Muti and Bernard Haitink, and I was always very influenced by seeing them work. Esa-Pekka Salonen was very important for me when I got my first position with the LA Phil—to see his work, to get to talk to him. And then, for four years, I was very lucky to be resident conductor under Gustavo Dudamel, and it has been a great time and a great influence from all of them.

EM: How would you describe your experience as the youngest ever Assistant Conductor of the Philharmonic under Dudamel, who also began his career with the orchestra at a very young age?

LB: With Gustavo, we had a very close relationship, and I'd see him not only in rehearsals and concerts but we'd also go out for lunch or dinner and talk about many things, including music but also the life of a conductor. To see how he handled the duties of Music Director of such a great orchestra at such a young age helped me a lot, especially when I was appointed Music Director of Tonhalle Orchester Zürich.

EM: He certainly is much respected for how he managed those orchestral responsibilities. What are your duties as the orchestra’s Resident Conductor?

LB: This has been a very smooth process. I started as an Assistant Conductor, which means I spent almost the entire season with the orchestra and led anytime a conductor couldn't be there for any reason. For example, my first year there, I replaced Stéphane Denève on a subscription concert when he was unable to travel due to his wife being in labor with their first baby. It was a great honor, at only 21, and it was a great opportunity.

EM: That’s amazing. Even Leonard Bernstein was older than that when made his debut with the New York Philharmonic.

LB: Any time a conductor was sick or couldn't make it, the orchestra asked me to conduct. Then, after two years as Assistant Conductor, I was promoted to Associate Conductor for 2 years, and now resident conductor. I'm very grateful and appreciate my great relationship with the orchestra. As the years continued as resident conductor, we kept our great relationship and I've conducted much more often, including at the great Hollywood Bowl. It's a great honor because it's a great orchestra and I love all of the repertoire we've done. 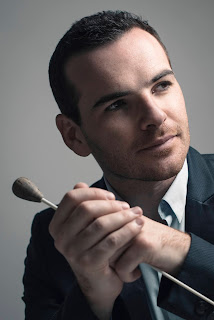 EM: You’ve chosen to bookend this weekend’s LA Philharmonic program of Ravel’s Piano Concerto in G and Valses nobles et sentimentales with two Gershwin works, the Cuban Overture and An American in Paris. How would you describe the musical and cultural connections between all of these works?

LB: Well, definitely Gershwin and Ravel are two composers I can associate with and whose music I conduct regularly. We also know that they met and Gershwin asked Ravel for advice, who replied "I don't need to give you advice or teach you anything, or you will write bad Ravel. If you write your way, you'll write great Gershwin." The two had an influence on each other. For me to perform American in Paris in the US, I feel very privileged. I feel very close to this piece and can imagine the atmosphere, and even the streets where Gershwin was when composed the piece, as I lived in Paris for many years. It's one of the most famous American pieces, so to conduct it with the LA Phil, my first time leading Gershwin with them, makes me very happy.

EM: Do you have a long history of collaboration with your French compatriot, pianist Hélène Grimaud?

LB: Oh, yes. We just performed four concerts together with the Dallas Symphony, but our first collaboration was in Monte Carlo where we performed the Ravel Piano Concerto. We've also performed together in Zurich and Gothenburg: Brahms Piano Concerto No. 1, Beethoven Piano Concerto No. 4, and Ravel often. We plan to do more repertoire together. We don't have to talk or discuss much before we play, we just understand each other so well, it's like playing chamber music with her. It's always a great joy.

EM: In addition to your busy schedule as a symphony conductor, you also have appeared with the Royal Swedish Opera. Do you plan to add more opera to your future conducting activities?

LB: Yes, definitely. While I was in Zürich, I was very busy so there wasn't any time for a full opera production. Starting this year, we did Rigoletto, which I enjoyed immensely. We had a great cast and a great time working with the orchestra. Of course, some opera productions take more time. This took almost 3 months. I started mid-October and the last performance was the beginning of January. I went straight from there to the Staatskapelle Dresden. It takes time but I love to do it! We're trying to plan more opera productions in the future.

EM: You frequently program works by 20th century composers, and recently have performed works by contemporary composers Rands, Salonen and Saariaho. How important is it for today’s conductors to program 21st century works for today’s audiences?

LB: For me, it's very important. This comes from my training at the Paris Conservatory, where we were working directly with the composing class. I got used to sight reading new scores and very often attended rehearsals at the Ensemble InterContemporain. Again, the influence I got from Boulez and Esa Pekka Salonen and Péter Eötvös has been very important for me. I always love performing new pieces. I conducted the world premiere of Esa-Pekka Salonen's Karawane for choir and orchestra, and also recently premiered a piece by Péter Eötvös in Dresden, Bernard Rands' English Horn concerto. Coming up I have the Saariaho Harp Concerto with Xavier de Maistre in Norway. It's always a great joy to not only conduct contemporary music, but to also talk with the composers about their music and gain a deep understanding of their piece.

EM: That bodes well for the future, Maestro. Thank you so much for your insights. 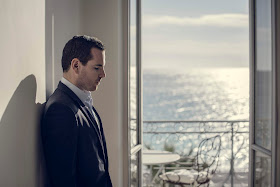