The cello is probably the closest to the human voice of all the instruments in the orchestra. In this program, with cellists Cécilia Tsan and Eric Byers, those voices lifted us closer to the stars, in the shadow of the great telescope at Mount Wilson, where the universe was discovered.

This series at the Mount Wilson Observatory, called Concerts in the Dome (curated by Cécilia Tsan), is in its third season and has quickly become one of the more coveted venues for the classical music world in Los Angeles. There were two performances—at 3 p.m. and 5 p.m.—and both were sold out.

Perched at 5,800 feet, and overlooking LA, the famed observatory has probably the most impressive approach to any concert venue in Southern California. One winds up into the San Gabriel Mountains and is greeted by beautiful views, the smell of pine trees, fresh air, an occasional deer, and a sudden quiet that envelops the senses. Simply arriving and walking around the Observatory is transforming. Then the magic begins.

The September 1 Labor Day Weekend concert opened with the stately Sonate No. 4 (Duett) in G major from Livre IV de sonates pour violoncelle et la bass continue (1740) by the Frenchman Jean-Baptiste Barriére (1707-1747). In this piece Barriére—an accomplished cellist himself—elicits the charm of 18th century royal Paris but also delivers many little surprises, with skillful double stops (playing two strings at once), creating a sound that in the Dome was almost like a small string orchestra with a velvety polish. Not a bad start to show off what this venue is capable of.

The 5 p.m. audience of over 100—the seating is limited due to the curvature of the balcony around the great 100-inch telescope—was now calmed and entranced on a warm late summer afternoon with the sunlight illuminating the interior of the Dome. Next was the more well-known Sonata for Two Cellos in C major G.74 by the Italian Luigi Boccherini, which showcased these players’ ability to sing on the instrument and fly through technically challenging material. Boccherini feels underrated by today’s standards; his music is lively, engaging and well- crafted, and he served as an important bridge between the Rococo and Classical periods.

Cécilia Tsan’s day jobs are that of Principal Cellist with the Long Beach Symphony and LA Master Chorale. Eric Byers is the cellist with the noted Calder Quartet. These superb players, at the top of their game, had been rehearsing all week leading up to the concert and it showed. Tsan and Byers engaged in spirited musical conversations, echoing each other’s phrases and nuances to create a fascinating stereo effect in the Dome. What also quickly became apparent was that both cellists were as comfortable in the rich lower registers of the instrument as in its lofty ranges, high on the A string, where the cello begins to sound even more like a singing human voice.

Also featured was a cello duo by the very prolific German, Jacques Offenbach (1819-1880). Composer of over 100 operettas and now probably best known for his opéra-comique, The Tales of Hoffman, Offenbach began his career as a cellist, and his Opp. 49-54 comprise a cours méthodique of duos for two cellos, ranging from “très facile” (Op. 49) to “très difficile” (Op. 54). No. 3 in C major from Op. 52 (“brillants”) proved to be far more than a piece of pedagogy—an expertly-crafted gem with a lively salon atmosphere. Offenbach wrote so much music that it will take some time more to appreciate his legacy.

A nice contrast in the program was provided by the film composer, Bear McCreary, who transcribed his moving main title music, from the film “The Professor and the Madman,” for two cellos. This piece offered an elegant exchange of moods layered on an emotional tapestry.

Eric Byers then surprised the audience with a composition he’d written especially for the occasion. “Observatory” was a sonic tour of the cellos' harmonic possibilities, a dialogue using harmonic arpeggios with sustained, single, natural, artificial, and double-stopped harmonics to create an other-worldly feeling, to which the audience responded very favorably. Any harmonics on a string instrument are tricky to execute: one has to apply the exact touch at precisely the right spot to elicit the overtones, which are different for each string. Too little pressure and nothing happens; too much and the effect is lost. Tsan and Byers made it all look easy.

The highlight of this concert was a transcription of the famous Chaconne from Bach's Violin Partita No. 2 in D minor BWV 1004. So familiar is the Chaconne on the violin that it took a moment to understand that this masterpiece works equally well in this arrangement by Claudio Jaffe and Johanne Perron, for two cellos.

For many, Johann Sebastian Bach (1685-1750), remains at the pinnacle of Western classical music. For the performers, playing Bach requires extreme concentration. In the right hands, the mastery and mystery of his music creates an almost religious experience in its listeners—and this is not accidental. Bach dedicated most of his music to the glorification of God.

When the Chaconne began, everyone knew that a special journey was under way and, filling the famous telescope Dome—a cathedral of science—the music echoed our spiritual quest to grasp the heavens. Formally a theme and variations, the Chaconne unfolds... and then keeps on unfolding. As Chopin said, “Bach is like an astronomer who, with the help of ciphers, finds the most wonderful stars.” Just when you think he has finished a particularly intriguing exploration, he takes you into yet another realm and then another, each time returning us safely to the grand opening theme. Tsan and Byers delivered the best of what Bach can be and transported us that much closer to the most wonderful stars.

Next up at Mount Wilson is the last concert of this year’s series featuring an accomplished roster of French musicians: 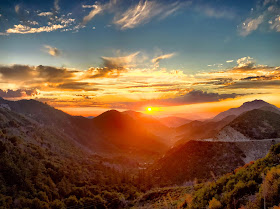