POP pops back with a rare Bizet opera—and ostriches

REVIEW
Bizet's "Don Procopio", Pacific Opera Project, Heritage Square Museum,
Los Angeles
DAVID J BROWN
The first, and last, thing to be said about Pacific Opera Project's production of Bizet's early opera buffa, Don Procopio, is that this propulsively energized, inventively staged and lit, virtuosically sung, and endearingly silly take on what was only Bizet's second completed opera (out of no fewer than 15, some of them never completed) was the perfect antidote to the long months of Covid-induced live-performance drought—at least for the capacity audience that whistled and cheered its enthusiasm from the greensward centered amongst the Heritage Square Museum's collection of historic buildings. 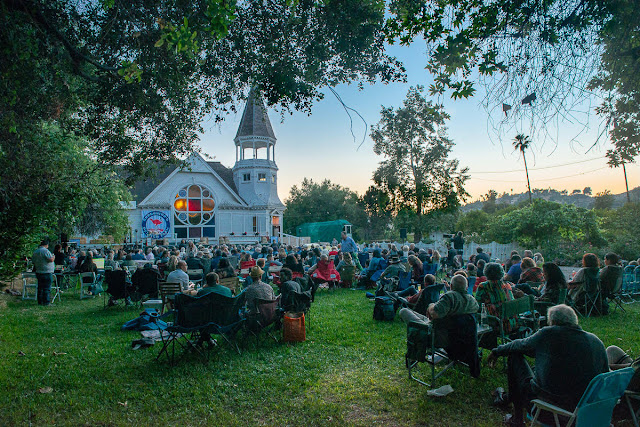 Georges Bizet (1838-1875) was something of a youthful prodigy, and won the prestigious Grande Prix de Rome at the age of only 18. Once established in Rome for his three-year stay, he wrote home that, to fulfil the prize's composition requirement, he had settled on an "Italian farce in the manner of [Donizetti's] Don Pasquale" using a libretto by one Carlo Cambiaggio that he found in one of Rome's used bookstores. Bizet proceeded to work on and complete the score of Don Procopio over the winter of 1858-59, but it was never performed in his lifetime, and only published in 1905 in a version edited by Charles Malherbe.
Imitation Donizetti or Rossini Don Procopio may be, but Bizet uses their tropes skillfully to create a score that is well-proportioned, concise, and tuneful, and in which aspects of his own mature style begin to be glimpsed in places. His only previous opera, written before he won the Prix de Rome, was a one-acter entitled Doctor Miracle, but whereas that begins with a formal, self-contained overture, when he came to Don Procopio Bizet chose to launch straight into the first of its two shortish acts (run together, in POP's production, as a single 90-minute span) with an ebullient ensemble of chorus and soloists that immediately lays out the "dramatic" situation.
The Cambiaggio libretto had an already well-worn and rather ageist plot, in which one old miser, Don Andronico, schemes to marry his niece Bettina to another, Don Procopio, on the grounds that a young spouse would be a spendthrift. But Bettina is already in love, unsurprisingly, with young Odoardo and, aided by aunt Eusebia and brother Ernesto, contrives to thwart the oldies' plans.
POP Artistic Director Josh Shaw drew inspiration for his production from the history of the Highland Park area around the Museum, which had included, back around the turn of the 19th and 20th centuries, ostrich farming. Thus the setting, unspecified in Cambiaggio's original, became Andronico's Ostrich Farm and much hilarity ensued, as when the chorus (Bizet's full forces reduced to just four: Matt Welch, Rachel Freed, William Grundler, and Eleen Hsu-Wentlandt) in due course not only sang but also impersonated both dancing ostriches and humans astride ostriches, thanks to quick-change costuming.
There was not a weak link amongst the cast, most of whom were stalwarts of previous POP productions. Surely much sprightlier than the part was originally conceived, the Andronico of Scott Levin (bass-baritone) and Euphemia (Jessica Gonzalez-Rodriguez, mezzo-soprano) nimbly negotiated the shoals of syllables—against repeated staccato interruptions from the chorus—in Bizet's rapid-fire setting of their opening dispute about the marital fate of Bettina. She, in the person of Rachel Policar (soprano) resplendent in ostrich feather head-piece, immediately demonstrated herself to be, in her taxing opening aria railing against her fate, as equal to the threat as she was vocally secure.
Don Procopio himself was Ben Lowe (baritone), robust both in voice and appearance to an extent that rather undercut the part of frail old dodderer as written, but who cared? The fairly brief role of "romantic lead" Odoardo was taken by Jon Lee Keenan (tenor), whose radiant singing of the Serenade that opens Act Two (its haunting melody recycled by Bizet in The Fair Maid of Perth eight years later) just about overcame the effect of the character being dressed in a check suit of clownish loudness. To complete the cast, the Ernesto of Armando Contreras (baritone) gleefully joined in the torpedoing of the hapless Procopio.
The entry on Bizet in the 1954 fifth edition of Grove's Dictionary notes that in his arrangement of the score for its publication, Malherbe "completely falsified it by adding [...] recitatives and an entr'acte in most inappropriate imitation of Bizet's later style[...]." 67 years on, later scholarship may or may not refute that academic finger-wagging but fake Bizet or not, POP included the entr'acte as a ballet pas de deux for two ostriches that culminated in a very sprightly-looking chick emerging from an egg discreetly laid, rear center-stage.
As a whole, the performance was not quite perfect, part of the difficulty being that, even within the comedic framework, there's not the slightest dramatic tension—Procopio himself rapidly wants as much to be out of the situation as Bettina et al desire him gone. Musically Bizet compensates for this with some lovely writing for the would-be soulful romance between Bettina and Odoardo, but I felt that the production's laser-focus on the farcical somewhat undermined this.
Some of the solo singing was a little less than secure, perhaps with the need to keep the buffa ball constantly bouncing and bobbing being traded for exactness of pitch—and perhaps also due to the very small instrumental forces not being audible enough in the open-air setting to give the support that Bizet's normal theater orchestra would have provided. A bigger band would have added depth and richness throughout, which is not to say that Music Director Charlie Kim and his intrepid group of just four strings and two woodwind gave their part all the verve and commitment that could be desired. 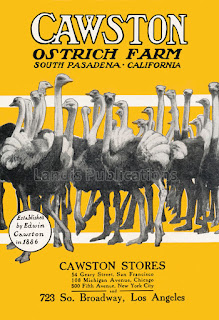 However...
In brief remarks before the performance began, Josh Shaw noted that the whole production had come together, from initial idea to realization on the temporary stage erected against the façade of the Museum's 1897 Lincoln Avenue Methodist Church, in just six weeks, and paid tribute to all who had made it possible. I for one hope that this quite astonishing achievement—Don Procopio's West Coast premiere, a mere 162 years late, be it noted—might eventually be augmented by a fuller-scaled indoor production, perhaps in a double-bill with Doctor Miracle...?
---ooo---
Pacific Opera Project, Heritage Square Museum, 8 p.m., Sunday, June 6, 2021.
Images: Production photos: Martha Benedict; Bizet: Courtesy KDFC. Cawston Ostrich Farm poster: eBay.
David J Brown No comments:

Michael Chioldi Believes in the Power of Opera