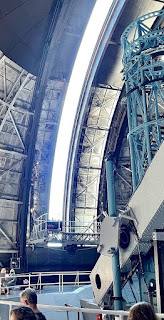 As the great steel panel over the viewing aperture rumbled aside to admit the clear mountain-top sunlight, it could easily have been taken as a visual metaphor for our current Covid-battered situation. There an in-person audience was at last, and eager to enjoy the first concert in nearly two years of Artistic Director Cécilia Tsan's summer chamber music season at this unique venue, the Dome of the 100-inch Telescope at Mount Wilson Observatory.
But... how precarious a privilege it seemed, with the audience duly masked (apart from a few who seemed to think their noses were exempt) in response to LA County's renewed mandate. And then the viewing aperture partly closed, of course to control the amount of natural light into the interior, but metaphorically seeming to underline how easily this opportunity for partial return to "normality" may have to close again too, should the highly contagious Delta variant, and whatever others may follow, really gain the upper hand.
However, the audience was there and, most importantly, the performers—Elissa Johnston (soprano), Ambroise Aubrun and Henry Gronnier (violins), Alma Lisa Fernandez (viola) and Cécilia Tsan (cello)—and the diem was thoroughly carpe'd by all! The program followed the pattern of previous years—an hour-long recital, followed by a wine-and buffet reception outside, and then repeated for a second audience—and in this case comprised the world première, no less, of a contemporary work, book-ended by minor and major Schubert (but the opposite way around in terms of key signature!).
The "Salve Regina" is one of many medieval Christian hymns focused on the Virgin Mary and her powers of redemptive intervention, and Franz Schubert (1797-1828) seems to have been particularly fond of the text, setting it to music no fewer than seven times between 1812 and 1824. His Salve Regina in A major D. 676 Op. Post. 153 is the penultimate of these, written in 1819 possibly for the soprano Therese Grob, with whom he had been in love and had hoped to marry.
Inevitably many by-ways in an output as voluminous as Schubert's remain to be explored, and this particular piece was new to me. Scored for soprano and, unspecifically, just "strings," the performance by Ms. Johnston and her colleagues showed that it works just as well with a quartet accompaniment as with full string orchestra, as revealed by a search of YouTube's endless resources to be more usually the case—and in a remarkably wide range of interpretations, from near-lugubrious to almost jaunty.
Schubert's marking is Andante con moto, and though the performance at around 10 minutes seemed a little slow for this, his endless gift for memorable melody spun its consolatory magic, with the brief passages that rise above the general piano/pianissimo dynamic of the work enabling Ms. Johnston's ample voice to resound with thrilling effect. Under the circumstances the Dome's acoustic seemed more than ever like that of a cathedral, but without the fog of excessive reverberation common in ecclesiastical spaces.
Le Lys et la Lyre (The Lily and the Lyre) is a setting for soprano and cello by the French composer Éric Tanguy (b. 1968) of a poem by François Cheng (b. 1921). As the program note made admirably clear, the work, written for and dedicated to Cécilia Tsan and here receiving its world première, embodies not only this artistic collaboration between composer and artist, but also the friendship of the poet with Ms. Tsan's parents, who like him emigrated from China to Paris in the 1950s. And, to complete the circle, M. Cheng himself apparently conceived of Tanguy setting the poem to music. 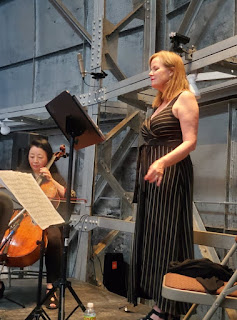 It's always perilous to write about any music on just one hearing, but Le Lys et la Lyre, at virtually the same duration as the Schubert, seemed in the context of this concert an admirable companion to it, with the radiant melody-plus-accompaniment of its predecessor's treatment of faithful supplication replaced by an intertwining of voice and cello that expressed a kind of humanistic counterpart—a paean to universal interconnectedness gained through sensual experience. Ms. Tsan's and Ms. Johnston's performance was as devoted, skillful, and eloquent as any composer could desire for a première.
Rather than any French contemporary or predecessor, the feeling behind and even to some extent the soundworld of Tanguy's work brought to mind, of all things, Sibelius's Luonnotar, in its open-eyed and open-hearted mythic embrace of all that the world and the universe have to offer, though of course without the orchestral sonorities and often extreme vocal demands of the tone-poem. Further hearings may modify, or even negate this impression, and I look forward to them.
So far, so good, in the sense that both these vocal/instrumental pieces in their different ways essentially expressed positivity and hope. For me, however, the haunted apprehensiveness that opens and largely imbues Schubert's great String Quartet No. 13 in A minor "Rosamunde" D. 804, Op. 29, felt truly aligned with current circumstances. This, his only string quartet to be published in his lifetime, was previously heard at Mount Wilson during Ms. Tsan's second season as Artistic Director, and my reaction to the work per se remained pretty much as expressed in my review of that concert.
This time the pervasive uncertainty and foreboding of the first movement seemed yet more intensified, not least by the observation (as not on that earlier occasion) of the long exposition repeat. Notably the four separated chords that climax the first subject group—marked by Schubert as just forte rather than ff, and which thus in some performances go for fairly little—in the hands of these players both times slashed the air like strokes from a mighty saber.
With that repeat included, their spacious account of the first movement extended to well over one-third of the total duration, and the sense of a front-loaded expressive balance was confirmed by the Andante, embodying the "Rosamunde" theme that gives the work its nickname, which follows. Here, the surprisingly quick tempo for the theme made the movement feel more like a harried gesture towards solace, rather than the peaceful counterpart to the first movement that it usually is, and in turn allied it more to the haunted mood of the ensuing Menuetto, where the semi-tonal shudder and long-held E on the cello that introduces the main Allegretto theme, at once hesitant and serpentine, on the other instruments, again sounded in Ms. Tsan's hands as a Norn-like warning. 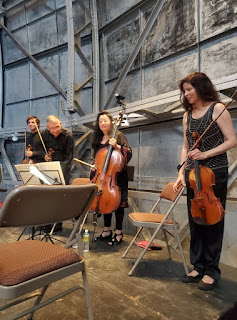 In the major-key finale the warmth that Schubert finally admits with the main theme's "call-and-echo village band" quality was given full value by the players, but the shadows cast by the minor-key second subject were equally pronounced, as was the full impact of the movement's central judder to a halt. The "village band" theme was a shadow of its former self in its recapitulation, and the two peremptory ff chords with which its final running out of steam are concluded were as emphatically not a Schubertian happy ending as in any performance I have heard.
All in all, this was a truly memorable return to the mountain-top, fervently appreciated by the masked audience. In both the Salve Regina and the "Rosamunde" Quartet Messrs. Aubrun, Gronnier, Fernandez, and Tsan played not only with all the individual skill and expressive commitment that one would expect, but also with a mutual empathy and coherence that would grace many a named string quartet with decades of collaboration under their belt.
One more pair of concerts remain in this truncated fourth Mount Wilson season—the Lounge Art Ensemble Jazz Trio on September 5, tickets here.
---ooo---
100-Inch Telescope Dome, Mount Wilson Observatory, Sunday 1 August 2021,
3:00 p.m. and 5:00 p.m.
Photos: Post-rehearsal: Nathan Chwat; The Dome: Carlos Hernandez; With François Cheng and Éric Tanguy: Courtesy Cécilia Tsan; The performance: Danaë Vlasse; Salve Regina ms and Schubert: Wikimedia Commons.
David J Brown No comments:
‹
›
Home
View web version