REVIEW
Long Beach Symphony at the Terrace Theater, Long Beach Performing Arts Center
DAVID J BROWN
Last Saturday evening’s program at the Long Beach Terrace Theater ended with as loud and long an ovation as I can recall there, hailing the performance by the Andalusian guitar virtuoso Pepe Romero, with the LBSO under Music Director Eckart Preu, of the Medea suite by Romero’s long-time friend, the flamenco composer and guitarist Manolo Sanlúcar (b. 1943).
Sanlúcar composed his orchestral ballet Medea in 1984 and though Romero averred, in his engaging pre-concert chat with the conductor, that the work has far more to do with the soul of flamenco and southern Spain than with ancient Greek myth, it would still be interesting to know how the ballet scenario treats the story of the wronged and vengeful queen of Corinth, and in particular how the six movements of the suite, arranged for guitar and orchestra in 2012 by Manuel Barrueco, relate to the original hour-long ballet.
The suite itself is a substantial work, running well over half an hour in this performance, though Sanlúcar’s orchestral forces are economical: just double woodwind and two horns, strings (the LBSO fielding a strength of 8-6-4-4-3), timpani, and percussion—the score’s only lavish element, with a four-person line-up playing a wide variety of untuned instruments.
The brief Obertura (Overture) immediately unveils a landscape of bleak minor-key string textures over which a keening line rises and falls on the oboe (Rong-Huey Liu, Principal), to be abruptly interrupted by meditative guitar roulades. A sudden climax segues straight into the second movement, entitled Reencuentro Y Desencuentro (Reunion and Discord), with drums and tambourine leading a kind of threatening processional, and the guitar always present like an agitated spectator.
This cuts off abruptly, and then a long solo guitar introduction leads into the main body of the third movement, Seduccion (Seduction), in which oboe and strings sing a long and hauntingly nostalgic melody with at its heart a tender duet between the guitar and a solo cello (Cécilia Tsan, Principal). The percussion “continuo” returns to usher in the Conjuro (Incantation), its main theme repeated again and again in a hypnotic crescendo until it precipitates La Venganza, this penultimate movement being given onomatopoeic realism by irregular stabbing rhythms á la “Rite of Spring.” 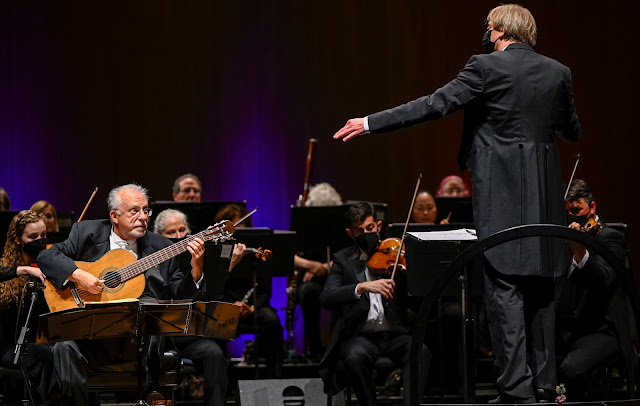 The final movement is Fiesta, but for all its energy, driven again by the percussion and the guitar, the powerful and cumulative sense of menace and inescapable doom that imbues the work as a whole is anything but dissipated as it swirls to its emphatic end.
Due to Covid, this performance took place some three years later than intended, but it was the hugely successful outcome of what had been clearly a passion project for both soloist and conductor. The Medea suite deserves to become as popular as Rodrigo’s Concierto de Aranjuez, to judge by the audience response, which only increased in fervor when Pepe Romero returned to the stage for an encore, Fantasia Cubana by his father, Celedonio Romero.

The first half of the program had inhabited a different musical universe, and Eckart Preu acknowledged in his pre-concert talk that the only linkage really was that all three works invoked some kind of musical “story-telling”: this being symphonic in the two pieces that occupied the first half.
The works of Carl Philipp Emanuel Bach (1714-1788)—like those of his brother offspring of Johann Sebastian Bach as well as other contemporaries—have in the last half-century or thereabouts become so much the province of “period” or HIP (historically informed) performers in small venues that it was quite a novelty to hear one of his symphonies played by (relatively) large forces on modern instruments in a big hall like this.
Straddling the Baroque and Classical eras, C.P.E. Bach’s 20-or-so symphonies are all relatively small in scale, in three movements rather than four, and only his last set, written in 1775-76, add pairs of flutes, oboes, and horns to the strings (here at the same strength as used in Medea). Preu and the LBSO opened the concert with the third of these, the Symphony in F Major H. 665.
Despite the Terrace Theater’s somewhat cavernous acoustic, in the Allegro di molto first movement C.P.E.’s characteristic alternation of tuttis with quiet solo interjections from the winds retained its sharpness of contrast, and the hugeness of the space actually accentuated the strange, glacial passage of softly shifting string harmonies (played with very little vibrato) that cut off the first movement’s onward rush—remarkably C.P.E. does this without changing the tempo marking—in preparation for the brief, but equally spectral Larghetto.
The final Presto, with first half repeat present but not (I think) the second half, was suitably bustling, and the audience reaction was warmly respectful, if not hugely enthusiastic. If the inclusion of this type of work in an LBSO concert can be regarded as an experiment, then this was a qualified success.
Much less of an experiment in this context was Joseph Haydn’s Symphony No. 104 in D major Hob. I/104. Eighteen years C.P.E. Bachs’s junior, Haydn had, by the time C.P.E penned his last set, already written numerous symphonies—some of them considerably more ambitious in scale and structurally adventurous—and he was only a couple of years older than C.P.E. had then been when in 1795 he wrote this, his final masterpiece in the genre. (Another parallel between the two composers is that, having finally relinquished the symphonic genre, both went on in their old age to compose substantial quantities of choral music.)
The performance was notably energetic and committed, with Preu seeming to relish Haydn’s subtle and not-so-subtle musical jokes, as in the Andante (kept moving here) where the aging composer apparently pretends to lose his way, or nod off, only to jerk awake with a sudden fortissimo.
The third movement Menuetto went with an infectious “Viennese” lilt, and Preu made the first and last movements more in scale with each other than they sometimes are by the omission of the initial Adagio—Allegro’s exposition repeat, but then the inclusion of the comparable repeat in the final Allegro spiritoso. Haydn is still too often absent from concert halls compared with, say, Mozart and Beethoven. More please!
---ooo---
Long Beach Symphony Orchestra, Terrace Theater, Saturday, April 30, 2022,
8 p.m.
Images: The performers: Caught in the Moment Photography; Sanlúcar, C.P.E. Bach, Haydn: Wikimedia Commons.
If you found this review to be useful, interesting, or informative, please feel free to Buy Me A Coffee!
David J Brown