Celebration and Inspiration at the Mason House Finale

REVIEW
Brandenburg No. 4 & more..., Mason Home Concerts, Mar Vista
DAVID J BROWN
Though—praise be!—live concerts with audiences are (mostly) back after the long silence, schedules are still vulnerable to Covid mayhem and, for the second week running, a local event originally planned for an early/mid-season slot had to be repurposed as its season finale. But the good news was that, as for the Long Beach Symphony on the first Saturday of June (reviewed here), the present recital, played by seven of LA's brightest talents, proved a fortuitously fitting climax to the 2021-22 season of chamber concerts hosted by composer Todd Mason in his Mar Vista home.
This miscellany of no less than seven programmed items, originally planned for February but postponed due to an infection spike, therefore had an end-of-season sense of festivity, if anything accentuated by Mason’s Covid-cautious decision to move the performance from his acoustically-crafted concert room to the backyard patio—just large enough to accommodate chairs for around 50 but inevitably putting a bit of squeeze on serving space for the ample and delicious supper to which patrons of the series are regularly treated. 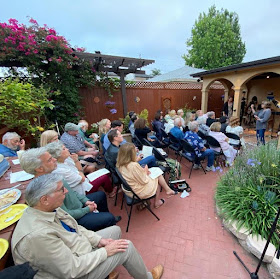 Sensibly, the Mason Concerts’ regular speaker, Dr. Kristi Brown-Montesano of Colburn Conservatory (left), decided not to try and encapsulate this musical smorgasbord in one introductory talk, but chose instead to briefly comment on each piece before it was played. Indeed, she said, she had tried but failed to come up with an overall link between all the items—which was nearly, but not quite, a steady accretion from a single player at the start to the full muster of seven by the end.
The closest she could get was to regard the opening two works, for strings only, as an appetizer to the main, and mainly flute-oriented, platter, and as such she began by introducing cellist Bennie Fried to play two movements from J. S. Bach’s Suite No. 6 in D major for solo cello, BWV 1012—probably written, like the other five suites, some time before 1720.
To a non-performer it always feels particularly challenging for whoever plays first in a concert to seize the cold-open moment and really launch the event, and in this case for a single player to do so under the technical and interpretative demands of Bach’s solo cello writing seemed especially daunting. Mr. Fried, however, rapidly won over the audience with a spacious and rhythmically free account of the Prelude, followed by the third-movement Courant shorn of both its repeats, so that it felt like a lightweight encore to the Prelude’s breadth and seriousness.
The second strings-only hors d'oeuvre was a lingeringly affectionate account by violinist Misha Vayman and violist Virginie d’Avezac of the Duo in C major for Violin and Viola, JS 66, composed around 1891-92 by Sibelius: sweetly melodic but not to these ears very “Sibelian” in any recognizably harmonic or rhythmic sense. It was a reminder—Dr. Brown-Montesano aptly referred to it as a “song without words”—of the legion of chamber and instrumental works that Sibelius wrote in the years before his celebrated orchestral tone-poems and symphonies, and which still remain virtually unexplored, apart from in BIS’s prodigious Sibelius Edition.
“Does this mean it gets louder and then quieter again?” whispered one wag on seeing that the next item was by Franz Doppler. Ms. Brown-Montesano may or may not have caught this scientific over-simplification, but she was quick to point out that Franz Doppler (1821-1883), flute virtuoso and composer, was not the same as Christian Doppler (1803-1853), the mathematician and physicist who first defined the principle that became known as the “Doppler effect.”
Franz Doppler’s Rondo for two flutes and piano introduced the virtuoso flute skills of Sara Andon and Rachel Mellis—the presence of the former a constant for the remainder of the evening—as well as the conductor and pianist Tae Yeon Lim, playing an electronic keyboard that as the evening progressed was to prove remarkably versatile.
Their nimbly interlocking account of the piece, with its earworm-inducing main theme and secondary melody that bore a slight resemblance to “Cherry Ripe,” made one regret that time constraints didn’t allow for the Andante of Doppler’s complete two-movement Op. 25 to be included before the Rondo.
The same three performers concluded part one of the recital with Ramesh Kumar Kannan’s brief and touching A Father’s Letter, composed in 2021. For this Mss. Andon and Mellis moved to their alto flutes, and Mr. Kannan himself was present to receive warm applause.
Though we’re well beyond the snobbery that film music is just generically inappropriate for concert listening, I do think it remains a challenge to present a memorable movie theme—originally designed to represent a character or enhance a piece of action—in a way that is also a satisfactorily self-contained piece when divorced from that original source.
For me this was true for the arrangements which opened the second half—after a break for more refreshments and socializing—of both Ennio Morricone’s Cinema Paradiso and John Williams’ "Princess Leia Theme" from the original Star Wars, with each having just a little too much “wrapping around” when you’re really just waiting for The Tune to come back.

That said, the performances, by Ms. Andon (now adding piccolo to her flute family resources) and Adrianne Pope (violin), together with Ms. D’Avezac’s viola and Mr. Fried’s cello, were as skilled and committed as anyone could desire, and enhanced by eloquent encomia from Ms. Andon and Dr. Brown-Montesano on the composers: Morricone, who though he created an entirely new Western “sound” for the “Dollars” movies back in the ‘60s had to wait a half-century before winning the Best Original Score Oscar (right) for The Hateful Eight; and John Williams, still going strong at 90, who may or may not be "the greatest movie composer of all time" but is certainly the most well-known, beloved, and honored.
And finally, back to Johann Sebastian Bach. All seven performers now mustered on the patio for a performance—after Ms. Brown-Montesano etched in what is known and surmised about its history—of the Brandenburg Concerto No. 4 in G major, BWV 1049. It may seem hyperbolic to say it, but with the players thoroughly warmed up and buoyed by a hugely appreciative audience, this was simply one of the most vivid and rewarding performances of a Brandenburg that I can recall in nearly 60 years of concert-going.
Led by Ms. Pope’s virtuoso account of the highly ornate Violino Principale part, and underpinned by Ms. Lim’s electronic keyboard now convincingly disguised as a harpsichord, every strand of Bach’s divine polyphony was “present” and characterful in what felt like a reaffirmation of the eternal verities of great music at a time when so little in the world seems certain.
And even this wasn’t the end. After an ovation that must have rattled the windows of Mr. Mason’s neighbors, the players stayed for an encore: his own arrangement for flutes, strings, and continuo (Ms. Lim’s keyboard now metamorphosed again into an organ) of "Jesu, Joy of Man's Desiring" from Bach’s Cantata No. 147 “Herz und Mund und Tat und Leben,” BWV 147. Further comment is superfluous, as you can hear this for yourself if you click on the image at the top of this review, except to say that it fittingly ended a very special evening.
---ooo---
Mason Home Concert, 3484 Redwood Ave., Mar Vista, CA 90066, 6:00 p.m., Saturday, June 11, 2022.
Images: The performance: Courtesy Todd Mason; Sibelius: composer website; Doppler: Wikimedia Commons; Morricone: National Public Radio; Bach manuscript: IMSLP.
If you found this review to be useful, interesting, or informative, please feel free to Buy Me A Coffee!
David J Brown