LA Ballet's Mr. B outdoes "Kings of the Dance" 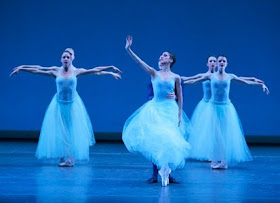 So what was it that captured Southern California’s dance buffs recently – other than the Olympian figure skaters? Try a sub rosa contest between women in tulle tutus and men as fierce fugitives from all that feathery ephemera. But it looks like Balanchine had it right -- Ballet is Woman -- when he gave the nod to the so-called fairer sex.

The rivals, as it were, came in the form of Los Angeles Ballet in an all-Balanchine program -- masterworks that keep the universal standard aloft – and a touring show dubbed “Kings of the Dance,” replete with enough bare-torso beefcake to get Chippendales’ fans whistling, if not the rest of us.

The winner, first. LA Ballet, a newly-minted troupe now in its fourth season (and not to be confused with John Clifford’s plucky enterprise of several decades ago), comes with impeccable credentials: Colleen Neary, bred at New York City Ballet and a muse to the master himself, together with the Royal Danish Ballet’s Thordal Christensen, co-directs the company. And so far, each outing has brought the artistic level to a higher plane. Angelenos may get an enduring dance resident yet – one befitting the alleged entertainment capital of the world.

Shrewd recruitment, tip-top coaching and canny casting paid off in these latest performances of three Balanchine classics. “Serenade,” the first ballet Mr. B. made after landing on these shores back in 1934, is, was and, arguably, will always be the work that can bring tears to the eyes, so earnest and sincere and filled with poetic imagery is it.

Think of the young Balanchine, besotted with his studio full of ballet beauties, beckoning them to help forge his art, with his Tchaikovsky, into an autobiographical dream. What we get is a vision of tulle-skirted acolytes, their eyes misty, looking heaven-ward. They mark the Russian creators’ impulse of elegant yearning. They sweep by in a complex of swooning configurations until the end, when the blindfolded man is led by his muse, and followed by another, with the first one having fallen and languishing on the floor, on to the finale where she is borne aloft to the wings. 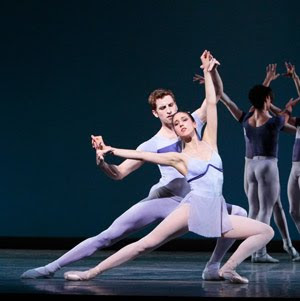 Melissa Barak (left) became the heart and soul of Balanchine’s reverie. Not one who just does the steps perfectly, but gets inside and infuses them with feeling -- subtly, organically -- thus telling us where they come from. And in “Kammermusik No. 2,” mirroring Hindemith’s score with its jaunty and sharp angularities, she changes form and feeling to meet the vehement occasion with the same degree of attunement. Although your eyes can’t help but go to her, the rest of the company revels in its pristine performances.

Meanwhile the “Kings” proved not to reflect that inspired group of Ted Shawn men at Jacob’s Pillow, back in the 1930s when the queen of barefoot dance, Martha Graham, was busy idolizing and choreographing for the brawny Erick Hawkins et al. Nor do they boast the star-power or the chops of those Three Tenors, whose gimmick may have teased these ballet producers with big-time fantasies of lucre. But in the end, their effort at showy masculinity, with little artistic context, made for mere display.

Yes, it helped somewhat that the bill of fare was high-minded enough to include a Christopher Wheeldon piece (though not a particularly memorable one), set to Schubert’s “Death and the Maiden” String Quartet, that shattering music that Woody Allen used to far greater effect in “Crimes and Misdemeanors.” (Remember the scene where Martin Landau returns to Anjelica Huston’s apartment to find her murdered, lying on the floor, eyes open? It gets its drama from the score’s agitated passages.)

And there was Ashton’s “Dance of the Blessed Spirits,” for the fair, noble, relatively unmuscled “King” of the court, David Hallberg. The other assorted solos began to look like more of the same – beautiful men striking poses that showed off their sinew and fine form to moody modern music and mostly lit from above.

Joaquin de Luz, an Eddy Villella type, scorned the body modeling; in his loose shirt and baggy trousers he danced as though the music flowed through him, in every example. He owned it. It owned him. His characterizations exploded on the stage. The same could hardly be said for Desmond Richardson, who seems perpetually bound in Dwight Roden’s acrobatic traps – designed to spot his textbook musculature, with skin oiled to catch the light in nearly naked exhibition. Please, god, let the man just dance.
Donna Perlmutter