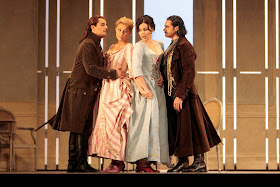 Cosi Fan Tutte always brings to mind some other opera--and it should not, as it's grand enough on its own.

But it happens to be the third prong of the greater-than-grand Mozart/Da Ponte collaborations; it especially if modestly draws from Figaro; and it strongly anticipates not only The Barber of Seville but also Il Turco in Italia. It has its puppeteer and it has its frothy love complexities. Like Figaro and the two Rossini operas, it dispenses plot points like a bubble-blowing machine; dozens and dozens of poofy little spheres of action float by, to pop a little after their born. But the plot never entirely floats away as it does in other opera buffa, and Cosi never runs to farce. In fact, underneath the easy frolic is a complex psych study of the way men and women behave when daring to try to improve on love requited.

And that's the way the silly geese presently flapping their wings onstage at the Dorothy Chandler Pavilion in a new LA Opera production of Cosi all work: they bring their full emotional chops to the many moods of paranoid love. Mostly, they do the work very well with their antics and acting; and its in their psychological expressions as singers and actors that the ensemble most shines. When there is little to emote, however, the singers merely pass muster, tapering off from the highs of the production's top moments.

I liked the girls as singers and also as actors. The girls experience the most heart-tugging and their emotional swings are bundled up tautly in their vocals. Roxana Constantinescu's Despina is perky and mischievous enough for her world-wise maid role and all her attendant soubrette double duty. Cecillia Bartoli sets the standard for this role and sets it high, but Constantinescu brings a good contender, and it's not a wonder as she's also sung in the two other Mozart/Da Ponte collaborations. Ruxandra Donose's Dorabella works out her eagerness for the boys with giddy aplomb, while Alexandra Kurzak's Fiordiligi, the sturdier sister, walks her path with the requisite alternating blends of sanctimony and surrender and finds a likeable coloratura when called on.

And I liked the boys as actors and also as singers. The men are physical, challenging, capricious as actors; they are indeed certifiable peacocks, mugging and strutting and straddling their way through the two hundred minutes. As singers, they are similarly spot-on, though again, they sometimes fall off when the demands lighten. Guglielmo is sung by Ildebrando D'Archangelo, a smoldering presence either as shorn Italian or mustachioed Albanian, and a very excellent bass-baritone. The great irony of the production is tenor Saimir Pirgu, an actual Albanian (!) who plays Ferrando; he plays an Italian playing an Albanian with appreciable nuance, and his part of the duet Fra gli amplessi is particularly appealing. I found Lorenzo Regazzo's Don Alfonso a little too cutesy as an old philosopher; his hair is not gray and his gait is young and spry, but cast against type, his antics still manage to set the table convincingly.

The musicianship under the baton of James Conlon is exceptional, as it almost always is. One particular set with a resolutely bel di blue sky backdrop is very commodious and worth the ticket alone. But I had some trouble with the lighting of this production; footlights were used sparingly and scenes set downstage were shadow-riddled while faces down right and down left remained less than bright.

Formed in 1969, The Cleveland String Quartet has been lauded as one of the premier quartets of our time. For a time they were the quartet in residence at the State University of  NY at Buffalo, my alma mater, and I was fortunate enough to become well acquainted with their work. I was quite excited to find some clips of their recordings with Emanuel Ax posted on YouTube, and I simply had to share. This breathtakingly beautiful movement from Schumann's Piano Quartet is a wonderful example of their exquisite performances, and Emanuel Ax is the perfect pianist for this undertaking. If you haven't heard the ensemble before, prepare yourself for a rare treat.
Anne French 1 comment:
‹
›
Home
View web version