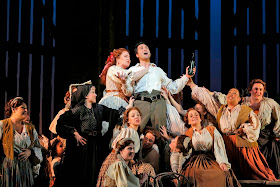 No wonder Elixir, the most widely performed opera of its day, was a breakout hit for Donizetti. That the composer, with the help of poet Felice Romani’s clever libretto, could complete such a brilliant work in only one month, is a tribute to his genius: the nineteenth century equivalent of Fast and Furious meets Gone in Sixty Seconds - or in this case, thirty days. Comedy is about pain, and this “dramedy” delivers in generous amounts the amorous suffering of its sympathetic hero Nemorino without over-exaggerating its melodramatic pathos.

In his San Diego Opera debut, tenor Giuseppe Filianoti’s lovable Nemorino fit squarely into the classic portrayal of the underdog romantic hero. His ability to bare his feelings, and the contrast between his naïveté and his love interest Adina’s sophistication, were well played. As with Donizetti’s Daughter, the expectations to deliver in a celebrated and notoriously difficult aria (in this case Una Furtiva Lagrima), and the pressure of being compared with history’s greatest tenors, including Filianoti’s mentor Alfredo Kraus, were intense. Filianoti sounded stressed in the aria but came through valiantly, a testament to his background of performing at world-renowned houses such as the Metropolitan Opera, La Scala, Berlin, Vienna and Bayerische Staatsopers, Covent Garden, San Francisco Opera and Lyric Opera of Chicago. One hopes as the run progresses he will be able to relax more into both the role and the aria.

As the spirited, shrewdly intelligent Adina, Tatiana Lisnic sparkled in her SDO debut. The young Moldavian soprano showed a canny understanding of her character’s strengths and weaknesses, flipping between sharp-witted shrewish young woman and love-struck pushover at any given moment. But her most impressive strength was her gorgeous voice, perfectly suited to the demands of the role, and her ability to maintain absolute control and consistency from the stunning high C’s down to the chest tones of the lower register. Her experience in singing Mozart was shown to full advantage as she spun out lustrous tones and handled the role’s frequent fioratura with seeming ease; and she succeeded at staying in perfect sync vocally and dramatically with her tenor costar. No doubt her appearances, her first in San Diego and in North America, and in Paris and Vienna, will snowball into a major career in the very near future. 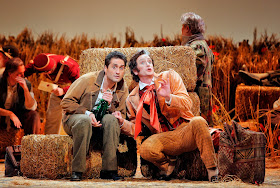 Those who were delighted with American bass Kevin Burdette’s Company debut last season as Sgt. Sulpice in Daughter of the Regiment must have been thrilled with his performance as Dr. Dulcamara. Unlike the typical Falstaff-like buffoon often seen in this role, Burdette was all spindly limbs and angularity: an operatic Jim Carrey, both in looks and in comic genius, whose pratfalls were done with convincing ease. His versatile range of roles both traditional and contemporary, and his experience in opera companies such as the Met, Santa Fe, and Teatro Colòn in Buenos Aires, served him well, as he negotiated the complex range of vocal and dramatic demands without overplaying the character’s boisterousness and tomfoolery.

Familiar to audiences from his frequent appearances here since his 2002 SDO debut, Malcolm MacKenzie sang Belcore with vocal assuredness. His opulent baritone filled the house without sounding forced, reflecting the recognition he has received as a winner of the Metropolitan Opera Western Regional Auditions and a finalist in Plácido Domingo’s Operalia competition. He played his role as the military authority figure with understated comic flair: an appealing Belcore whose offhandedness and ambivalence seemed jovial rather than gratingly arrogant. 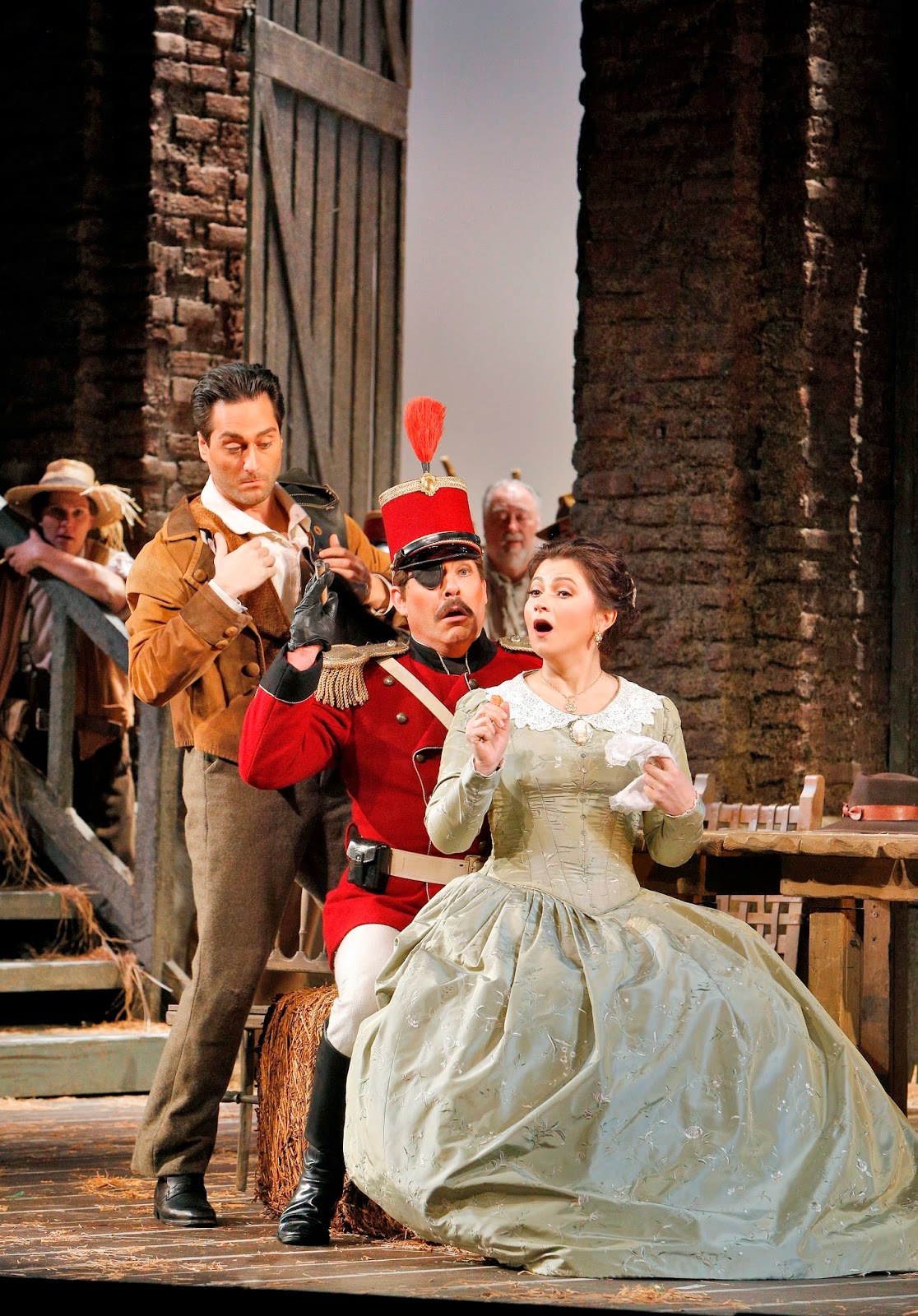 Since her Company debut in 2011, San Diego native Stephanie Weiss has performed with Deutsche Oper Berlin, Berlin Staatsoper Opera, and Opera Orchestra of New York, among others. Her vocally substantial Giannetta was an agreeable change from the lighter soubrette voices usually cast in the role: always audible and full, with pleasing tones, and never lost in the shuffle of other competing voices.

American conductor Karen Kamensek interview gave an impressive SDO debut, conducting with authority and a clear, concise stick. Born in Slovenia and raised in Chicago, her unique list of credits ranges from her current post as music director of Staatsoper Hannover to appearances with Volksoper Wien, Opera Australia, Symphonie Orchester Wien, and the world premiere of Philip Glass’s Les Enfants Terribles at the Spoleto Festival USA. Her tempi felt rushed at times, but overall she showed great command of her craft.

Stephen Lawless created a wealth of clever moves for his characters on stage. The veteran British stage director, who debuted here in 2007, has appeared worldwide in opera houses and in recordings and telecasts for BBC, and with a profusion of celebrated companies on multiple continents. Some of his maneuvers seemed over the top (e.g., Nemorino’s off-color activity at the rear of the stage in Act 2), and it was difficult to see and hear Filianoti when he was hidden behind the threshing wagon, but such details as Nemorino pulling on Adina’s skirt to keep her from abandoning him came off splendidly.

Johan Engels’ sets were a true evocation of the countryside setting of threshers and the heaviness of their labors, though I found the massive gates distracting at times and would have preferred to see the entire company rather than having them hidden behind the gates. Joan Sullivan Genthe’s lighting worked in effective sync with the sets, and the subtle pinks and blues of her sunset faithfully evoked an amorous atmosphere and the promise of love. Charles Prestinari’s chorus sang robustly as always, and they plunged into their very stage-active roles with aplomb.


If you believe in romance, and would like to extend your Valentine’s weekend into a weeklong celebration, Elixir of Love could be your perfect date night. I highly recommend you take in one of the remaining performances on Feb. 18, 21, or 23.