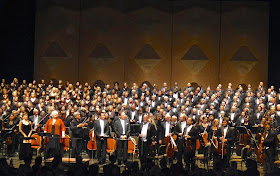 A chilling Dies Irae that evokes the wind-and rain-lashed Cyprian coast. A Requiem Aeternam that conjures fronds of papyrus bending over an Egyptian stream and the gossamer fabric of Egyptian priestesses’ garb. A Domine Jesu Christe that replicates the atmosphere of Numi Pietà. An Agnus Dei accompanied by three ethereal flutes. A Lacrymosa that evokes the poignant confused cries of two anti-monarchal Spaniards.

The comparisons are irresistible. Though Verdi’s Requiem is not an opera, whispers of Falstaff, murmurs of Aida, power-soaked reminders of Don Carlo, infuse this work with shimmering elicitations of Verdi’s unprecedented body of work. Nonetheless this masterpiece stands on its own, reaching beyond the annals of operatic literature, to meld the drama of opera and the monumental power of a religious experience.

In the hushed cathedral of San Diego’s Civic Center, as if transformed for one magical evening into the church of San Marco in Milan where the Requiem premiere took place, a packed audience hung on every note and nuance emitting from the combined forces of the San Diego Symphony, massive San Diego Opera Chorus and San Diego Master Chorale, and four astonishing soloists whose artistic prowess outweighed their considerable combined star power. This one-time event was the experience of a lifetime, capturing the wonder of the audience, and the souls and minds of a collective musical consciousness assembled to perform a work whose 1874 premiere was worthy of being conducted by the composer himself. Unlike the premiere, which took place in a church where applause was prohibited, last night’s audience burst forth in a no-holds-barred expression of emotion. The atmosphere of a city mourning the loss of its stellar opera company added to the poignancy - and mystery - of the experience.

According to tenor Piotr Beczała, this Requiem is not a religious experience, not an overpowering statement of power: “Not part of the Mass, not prayer or being in church. It is its own piece, much more intimate than opera… one’s own intimacy shared with something outside of oneself… a Supreme Being.”

Yet, the raw emotional power evoked and expressed via the music amount to a supplication to that Supreme Being to show forgiveness and mercy, to help one confront one’s own mortality. Verdi was not a religious man, but in this work he plumbs the depths of his grief at the loss of his beloved colleague Alessandro Manzoni, who died the year between the Aida and Requiem premieres. That the Company assembled was able to capture this essence is a testament to San Diego Opera’s astonishing teamwork.

Verdi wrote the vocal solos for four singers he knew. Three of them had sung in the 1872 Aida premiere, among them the Aida, a soprano with a superb high C; and the Amneris, a mezzo with exquisite legato. The composer gives all the soloists a miraculous range of vocal and dramatic possibilities at once diverse, demanding, and virtuosic, and, by injecting his own distinctive strokes, gives the listener an extra feeling of intimacy with the work.

The Requiem has been staged in a number of ways in recent years, but no staging is necessary with a formidable group of soloists the likes of which rarely is seen on any operatic or concert stage. Complementing the stellar cast of SDO’s recent A Masked Ball - tenor Beczała, soprano Krassimira Stoyanova and mezzo-soprano Stephanie Blythe - Ferruccio Furlanetto, celebrating his fortieth anniversary on the stage, added his breathtaking basso profundo artistry, packing a powerful punch to the already giddy audience’s experience.

Beczała clearly was born to sing this work. His voice, as golden as in his rendering of King Gustavo in A Masked Ball, spun each tone with perfect consistency from top to bottom with virtual effortlessness. One can hardly imagine a more finely shaped or poignant Ingemisco. Each word, each phrase was so brilliantly wrought that no Supreme Being could deny the absolution the supplicant is begging for.

Blythe also showed perfect control, not only in her range but also in her ability to alternate between soloist and team player. Her voice rose from the depths, forcefully at times, poignantly at others, dominating in her solos, and then blending seamlessly with the other voices. Especially impressive was the Agnus Dei soprano-mezzo duet, in which Blythe and Stoyanova sounded together as one perfect whole.

One San Diego Symphony member described Furlanetto’s as the richest bass she’d ever heard. Indeed, the voice goes far beyond sumptuousness. That an instrument with the depth, power and opulence of Furlanetto’s can at once negotiate the lower extremes of the basso range, and at its apex communicate the delicacy of a mere mortal pleading for the indulgence and understanding of a Supreme Being, demonstrates the essence of the singer’s vocal virtuosity, and his uncanny ability to hold the audience in thrall whenever he emits a note.

Stoyanova swept the audience off their feet throughout, and especially in the final Libera Me. Astonishing in her ability to spin delicate tones throughout the massive work without ever sounding forced, and to project crystal-clear B’s and C’s right through the combined forces of a double chorus and an orchestra of Wagnerian proportions, Stoyanova sustained her fine-tuned artistry without ever sacrificing delicacy, creating an inspired ending filled with subtle power.

It is said that for a conductor the Requiem is a dream come true, a unique opportunity to meld operatic drama, thrilling symphonic writing and dazzling solo moments. Massimo Zanetti displayed true command of all these elements, showing a deep understanding of the contrasts between terrifying and poignant moments, in touch with his emotions yet distancing himself when necessary. The San Diego Symphony was up to the task of fulfilling the demands of a score that tests the limits of each musician’s technical and interpretive skills.

For San Diego Opera Chorus Master Charles Prestinari and Master Chorale Music Director Dr. Gary McKercher, the evening represented an impressive accomplishment. The impeccably prepared chorus sang with both force and subtlety whenever called for, alternately prominent and restrained, with consistency of tone throughout. To be able to control such massive forces so beautifully and effectively stands as proof of both men’s expertise and acumen.

Verdi “adopted” the trumpet fanfares Berlioz used in his Requiem, but improved upon them, and the San Diego Symphony brass gave a remarkable performance. Often positioned antiphonally in the hall, the sounding brass symbolizes the call into the next world, to challenge our view of what lies ahead in the afterlife. One almost hopes this afterlife might somehow include a resurrection of San Diego Opera.

Religious or not, those of us blessed with the fortune to witness this staggering evening cannot help but give thanks: to whatever Supreme Being is responsible for Verdi’s inspiration, and especially to San Diego Opera for providing a grateful audience with a memorable experience - and the opportunity to plumb the depths of our own grief at the loss of our beloved Company, the jewel in the cultural crown of San Diego, which one hopes will rise again, delivered “from death eternal” into “perpetual light.”


Erica Miner can be contacted at [email protected]
emwriter