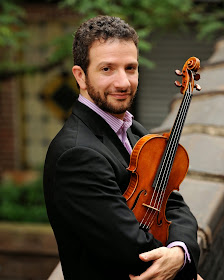 
As part of the Mainly Mozart Festival’s 25th Anniversary Season in San Diego, residents of Carlsbad were treated to a unique pleasure on Sunday, March 30, when a cadre of chamber music’s finest performers performed a program to please Schubert and Mozart lovers alike: Mozart’s infrequently performed piano Adagio in B Minor, K. 540, bookended by Schubert’s Arpeggione Sonata D. 821, and “Trout” Quintet, D. 667.

Those in attendance were able to worship at the feet of these two musical giants in the airy, cheerful contemporary surroundings of St. Elizabeth Seton Church, picturesquely perched at the top of a treed, flowered hill in Carlsbad. The heavenly setting added to the atmosphere of reverence associated with Franz and Wolfgang and their incalculable contribution to the infinite riches of the chamber music repertoire.

The program opened with the Arpeggione performed by cellist Ronald Thomas. A veteran performer with Chamber Music Society of Lincoln Center and co-founder and Artistic Director Emeritus of the Boston Chamber Music Society, Thomas dons his many hats as performer, teacher and administrator with great effectiveness. As a prelude to his rendering of the fiendishly difficult work, Thomas explained to the audience the origins of the six-stringed instrument for which Schubert presumably wrote the piece, which resembled a bass viola da gamba and was bowed like the cello but fretted and tuned like a guitar. Schubert’s sonata, which was not published until 1871 when the instrument had long been absent from the musical scene, and is now most often played on the cello, is notorious in cellist circles for its seemingly constant thumb position. Thomas expertly handled the technical demands of the piece without sacrificing beauty of sound: a true challenge when sitting atop an unforgiving concrete floor.

To morph from accompanist to soloist in quick succession is no mean feat, and pianist Anna Polonsky deserves kudos as the consistent trouper of the afternoon, performing with great expertise in both Schubert works and taking a solo turn in the limelight in the Mozart Adagio. Striking a perfect balance between the sensitivity required in a Mozart solo piano work and the declamatory passion so crucial to portray the darkness of the key of B minor, in which the composer seldom wrote, Polonsky superbly evoked the composer’s presumed dark state of mind following a less than stellar success of the 1788 Vienna premiere of Don Giovanni.

The crown jewel of the afternoon was the Trout Quintet, and the stellar ensemble chosen to interpret the piece was equally dazzling. Violinist Steven Copes, known for his versatility in his many roles as soloist, orchestral leader, chamber musician and more, showed equal adaptability as both the ensemble leader and solo violinist. His upper register was exceptionally assured, particularly in the tricky leaps and trill flourishes of the “Trout” movement, and the other passages meshed beautifully with those of the other four instruments. All in all, he made the challenging aspects of the piece look easy. Yura Lee’s lush viola sound provided ample support to Copes’s excellent passagework. Each of them passed phrases seamlessly to each other, to Thomas, and to San Diego Symphony’s principal bassist Jeremy Kurtz-Harris, whose sound was both opulent and well defined exactly as needed. Their renderings were beautifully enhanced by Polonsky’s deft technical execution in the challenging solo passages and sensitivity in the accompanying passages.

Even Richard Wagner came down from his lofty, self-centered pedestal to bow to the limitless genius of Mozart, when he acknowledged: “The most tremendous genius raised Mozart above all masters, in all centuries and in all the arts.” Mainly Mozart does a brilliant job of bringing the composer’s genius to Greater San Diego. As Mainly Mozart’s Executive Director Nancy Laturno Bojanic pointed out in her pre-concert speech to the ample crowd of music lovers assembled for the event, Mozart is the guiding inspiration for the organization’s mission, which is to keep Mozart alive for the San Diego artistic community. When it comes to Mozart, it’s definitely “Mission Possible.”

Erica Miner can be contacted at [email protected]
emwriter