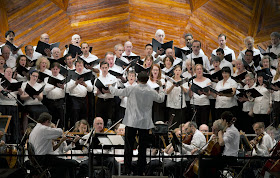 The Boston Landmarks Orchestra’s Aug. 5 concert at the Hatch Shell proved a number of points: first, that the city can boast a large number of outstanding musicians; second, that Music Director Christopher Wilkins can gather together an exceptional ensemble of musicians, chorus and soloists; and most importantly, that Boston loves Italian opera.

“Italian Night” in the orchestra’s summer concert series was a huge hit with the enthusiastic audience, due not only to the immensely popular favorites Wilkins adeptly programmed and performed, but also to the quality of the soloists he chose. Metropolitan Opera star baritone Stephen Powell (http://www.laopus.com/2014/01/doing-what-he-wants-to-do-stephen.html) and his wife and longtime soprano collaborator Barbara Shirvis headed a cast of singers who performed a program of Italian chestnuts sure to please.

Powell dominated the evening and immediately took command, captivating the audience with the power and beauty of his voice. Well known for his outstanding high notes and creamy legato, he showed no strain in his flawless interpretation of the fiendishly difficult Prologue to Leoncavallo’s Pagliacci. His tone production was impeccable, and his voice carried superbly in spite of the New England summer wind whipping across the stage. 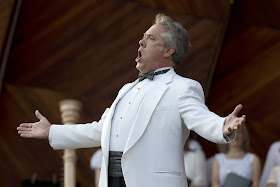 Wilkins then led the orchestra in a touching rendition of the Intermezzo from Mascagni’s Cavalleria Rusticana. If there were any dry eyes left on the lawn after that, “Dove Guardi” from Verdi’s Otello assured that the rest of the audience would become misty eyed, as Shirvis’s full-bodied soprano beautifully melded with the sounds of the Boston Landmarks One City Choir, Scott Allen Jarrett’s Back Bay Chorale and the North End Music and Performing Arts Center Youth Choir. The gifted children chosen to sing in the latter did an admirable job with Verdi’s challenging music, and charmed the audience with their pleasing personalities. 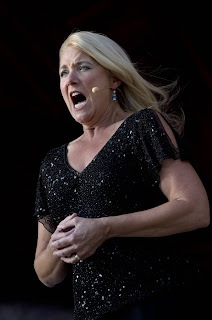 Honking trucks, screaming ambulances and the usual disruptive cacophony of Storrow Drive did not faze Powell in the demanding “Credo” from Otello. His powerful voice cut through both the ambient noise and the heavy orchestration, and did not flag even as he next brought the villain Scarpia to life in the Act 1 finale from Puccini’s Tosca. His tones were full and lush, and his characterization, even without the advantage of costumes and sets, was thoroughly believable. Shirvis came into her own as the vulnerable Tosca, her voice full and luminous, and her interpretation dramatically convincing. One would love to hear her sing Mozart as well. Baritone David Kravitz provided excellent support with his fine rendition of the Sacristan.

After the intermission, Wilkins changed the pace, channeling Fellini in an impressive rendering of Nino Rota’s Ballet Suite from the film La Strada. Well known for his movie scores, Rota had a long-standing collaboration with Fellini but also composed for other celebrated Italian directors such as Francis Ford Coppola and Franco Zeffirelli. The extensive violin and trumpet solos were expertly played by concertmaster Greg Vitale and principal trumpet Dana Oakes.

Orchestra and chorus members were given their chance to shine in the Overture and beloved chorus Va Pensiero from Verdi’s Nabucco, and in the equally recognizable Triumphal March from Aida. In the latter, Boston showed its unique creativity by adding the HONK! Festival ensemble (www.honkfest.org) to the mix. The self-described “free music and dance part of activist street bands” consisting of winds, brass and percussion - invented in Boston and copied in major cities across the US and Australia - added a surprising element of funk and fun to the combined forces of chorus, orchestra and soloists. Dressed colorfully, decorated with multicolored, dazzling and flashing lights, the band started out playing on each side of the audience, marched forward and assembled in front of the stage, playing all the while. After the hugely successful Verdi chorus, the band then launched into jazzy rock hits, blasting their way into the audience’s hearts and providing a lighthearted ending to the classical-based evening. 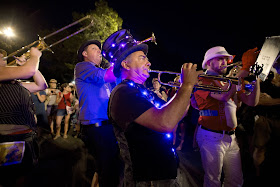 In another innovative move, it was announced prior to the concert that live tweets, translations of the texts, plot summaries and more could be found on the Landmark website through mobile devices. Thus, in this hugely enjoyable event the Boston Landmarks Concerts brought much-loved Italian chestnuts into the 21st century, assuring that opera remains not only beloved but also relevant. More information about the Landmarks series can be found at: www.landmarksorchestra.org.

Photos used by permission of: Michael Dwyer
Erica can be reached at: [email protected]
Erica Miner