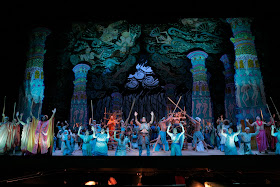 October 17 marks the much-anticipated opening of Seattle Opera’s production of Bizet’s The Pearl Fishers (Les Pêcheurs de Perles). Often viewed as a youthful neglected endeavor hovering in the shadow of Bizet’s hugely popular Carmen, Pearl Fishers nonetheless boasts some of the composer’s most sensuous and compelling music, as well as a story that depicts the perilous existence of the death defying Pearl Fishers of ancient Ceylon.

According to Seattle Opera General Director Aidan Lang, once it was decided to mount Pearl Fishers, the 2005 San Diego Opera production designed by recently named DBE Zandra Rhodes and directed by Andrew Sinclair was the clear choice. Though the opera takes place in Ceylon (now Sri Lanka) at an undetermined time in the distant past, Lang was quite taken with the stylized fantasy element and vibrant colors of Rhodes’ design. 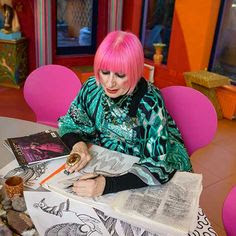 In advance of the opening, cast members Maureen McKay, Elizabeth Zharoff and Anthony Kalil and choreographer John Malashock (all making their Seattle Opera debuts) weighed in on their respective roles in the production.

Starring as Léïla, the goddess-like priestess who is the apex of the opera’s love triangle, Maureen McKay (http://www.maureenmckay.com) finds that performing roles in diverse styles and languages “Is like going to a museum and experiencing Renoir for an hour and then walking over to the Goya section for the rest of the day.” 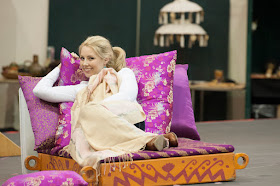 The insightful singer likens stylistic differences between, for instance, Mozart and Bizet to visual artistry. “Their brush strokes are different but the medium is the same. Singing both of these styles requires a very clean and clear technique and strict observance of the composer’s markings.” McKay believes the challenge of performing a lesser-known opera like Pearl Fishers as opposed to the composer’s universally known Carmen lies in persuading audiences to come see and hear the work live. “It is a story of complex love, forbidden desire, and forgiveness,” she says. “The vocal lines are stunning, the harmonies complex, and the choir and dancers are quite moving.” Having been deeply touched by the music as a young artist, she is convinced that the audience impact will be stunning.  “Especially with Andrew Sinclair and his team's beautiful rendering.”

In addition to being one of the world’s most prominent rising young sopranos, Washington State native Zharoff (http://elizabethzharoff.com) also is a composer of multimedia music, and has sung a plethora of opera repertoire of diverse periods and languages, including Morning Star by contemporary composer Ricky Ian Gordon. 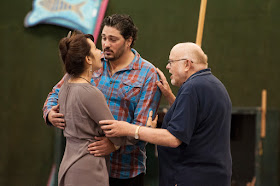 Tenor Anthony Kalil (http://www.cami.com/?webid=2412), who plays one of Léïla’s two suitors, comes from an unusual background for an opera singer. Four years ago he was working in Seattle for the Sherwin Williams Paint Company, traveling throughout the Northwest to train workers on how to use wood finishing products, when he suddenly found himself in the prestigious Lindemann Program at the Metropolitan Opera and has since garnered attention from opera enthusiasts.

Having focused largely on Italian repertoire thus far, the role of Nadir in Seattle’s Pearl Fishers is Kalil’s first full role in French. “I have always loved French opera. I find the language to be extremely beautiful and very friendly to the voice,” he says. Kalil finds the dramatic challenges of this role similar to those of others in the operatic firmament. “Dramatically, I just try to bring what I bring to every role, an open mind. Working with new directors and conductors as well as singers, allows me to challenge myself in new ways.”

Choreographer John Malashock (http://malashockdance.org), a familiar artistic presence as a San Diego resident, originally choreographed this production in 2004. “One of the greatest pleasures of the production is the reunion between Andrew, Zandra and I,” he says. According to Malashock, dance has a more integral role in this production than in other French opera productions, although the score and libretto only call for dance in one section. “In a normal world, dance might play less of a role in The Pearl Fishers than it does in Carmen. But in this production we put a tremendous amount of dance into it. This is one of the ‘danciest’ opera productions you’ll find anywhere,” Malashock says. Unlike most operas, where dance is “a diversion that’s dropped in,” he adds, “Here it really helps tell the story, and carry the emotion of the village.” 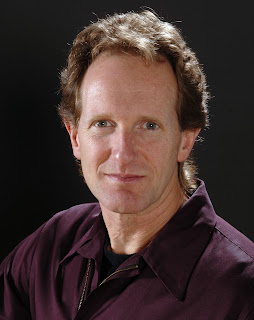 Though he works closely with designer Rhodes, who has some of the dancers wearing animal masks in the big Act 3 ensemble, Malashock works more closely with director Sinclair on integrating dance into the production. “But on a very practical level, working with Zandra to understand how she was costuming people definitely influenced some of the choreographic decisions,” he says. “Just in terms of how much of the bodies are exposed, or how restrictive the costumes were, it was important to know early on what she was doing.”

Using dance to help advance the story substantially energizes the production, Malashock says. “It never gets bogged down for any length of time. People will be quite astonished to see how different it is from the way ballet usually is.” Coincidentally, the Met Opera, which has not done Pearl Fishers for 100 years. also is performing the opera this season. “Not our production. Shame on them,” he says, laughing.