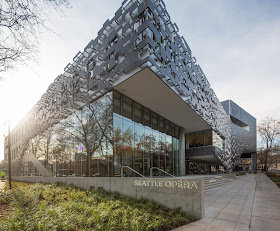 Dec. 15 marked the long-awaited official grand opening for members of the public of Seattle Opera’s brand-new, state-of-the-art rehearsal, storage and administrative building. The company is justifiably proud of the facility, for which they have tirelessly been fundraising over the past several years. Having broken ground after tearing down the former Mercer Arena, which stood on the site, the venue is now ready for use by the opera company. 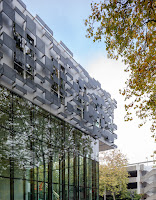 According to General Director Aidan Lang, with the opening of their new civic home, “Seattle Opera will continue to break down barriers that have previously kept people from being able to participate in opera…In addition to creating an environment for world-class artistry, we are establishing a welcoming and accessible community resource on the Seattle Center campus, inviting visitors to explore our city’s arts and cultural home.” The new facility is located at 363 Mercer Street, directly to the left of McCaw Hall. 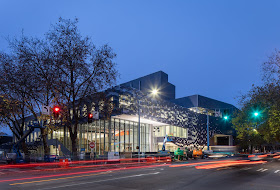 Designed by architect NBBJ, the handsome building is striking for its copious amounts of glass, which not only makes the edifice pleasing to the eye but allows passersby an enticing view of the activities taking place in the gleaming ground floor Tagney Jones Hall, a 300+ seat glass-box performance space with full theatrical lighting and very live acoustics, designed for educational and community events. Reclaimed wood from the roof of the Mercer Hockey Arena (built 1928) has been repurposed for terraced seating bleachers in the hall. 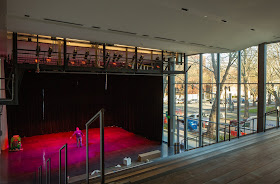 Also on street level is a new ADA-accessible box office, the first time the company has had this capability, says Kristina Murti, the Opera’s Director of Marketing and Communications. This will be for advanced sales, Murti added; the Will Call box office will remain in its current position in McCaw Hall. 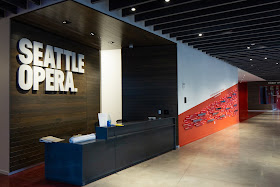 Of the facility’s 105,000 square feet, 20,000 of which is dedicated to community programming and education, a tour of the facility revealed, in addition to Tagney Jones Hall and the new box office:


•  A viewing garden where the public can look into Seattle Opera’s celebrated costume shop.
•  Space for storing and prepping 50,000 props.
•  Dedicated space for wig preparation and creation—a first in the company’s history.
•  Three multi-purpose studios. The largest of these is the same size as McCaw Hall’s stage and enables casts to rehearse on the scenery which will appear onstage; the other two studios can be used for rehearsals, community programs, youth operas, events, and more.
•   Original trees on 4th Avenue on the east side of the building that were planted for the 1962 Seattle Worlds’ Fair, then retained and nurtured throughout construction.
•   A rain garden that uses storm water runoff in an Earth-friendly way. 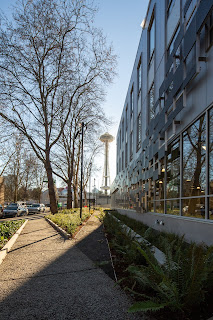 Attendees of the grand opening event were able to observe musical performances by Seattle Opera’s Chorus and Teen Vocal Studio as well as members of the Seattle Symphony, and a rehearsal of the company’s upcoming production Il Trovatore. They were also able to learn more about the history of Seattle Opera, as well as Opera Production 101 in a fun, informative talk from Dramaturg Jonathan Dean.

A group of lucky attendees participated in a Seattle Opera Sing-Along with some of Verdi's most popular choruses, and enjoyed a Costume Presentation with Costume Director Susan Davis. They were also invited to check out the space via self-guided tour.


One of the most impressive areas on view was the Costume Shop. Visible through large windows on the street level, allowing for a birds’ eye perspective of the many busy bees at work at the sewing machines, cutting tables and irons, the below level area profits from the high ceilings and natural light emanating through immense street-level windows.

The amount of storage for costumes and accessories was equally remarkable: rack upon rack of costumes, with countless others waiting to be filled, and space for thousands of pairs of shoes, which, for operas with large numbers of chorus members, is an absolute necessity. Equally impressive was the dedicated wig studio with more than 100 wigs. 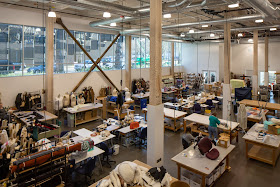 Included among the rehearsal suites are coaching rooms decorated with colorful opera posters, chorus and dance rehearsal rooms, generous numbers of much-needed lounge space for employees to take breaks from their exhaustive work. 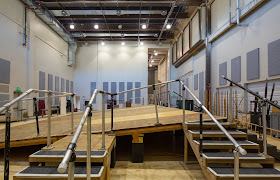 The spacious Speight Jenkins rehearsal hall has 40-foot ceilings and enough square footage for a raked rehearsal stage. At the time of this viewing, Maestro Carlo Montanaro was rehearsing two of the cast members of Il Trovatore, soprano Angela Meade and tenor Martin Muehle (both of whom sounded fantastic). 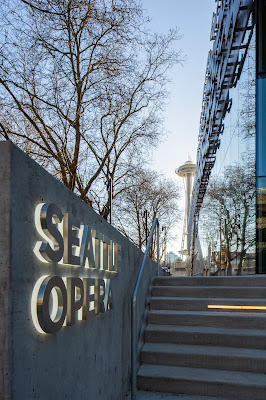 Also on view were the artists’ Green Room and offices for stage manager and production staff, as well as the General Director’s office, which was custom built to his specifications. Significantly, most of the offices have views to the exterior, and many have stunning views of Seattle’s iconic Space Needle.

Extra care has been put into such details as the special tapestry hanging in the central hallway, which was extracted from the colorful curtain used in Seattle Opera’s famous “Green” production of Wagner’s Ring.

The word impressive doesn’t begin to describe the immense amount of work that went into the conception, planning and executing of the opera’s stunning new facility.

Having served the people of the Pacific Northwest and the communities of its city with the highest level of performances, Seattle Opera is now entering an whole new era of achievement with their new home. There is absolutely no doubt that they will fulfill the facility’s potential to its maximum.


Erica can be reached at: [email protected]