The Other Long Beach Orchestra


You know all about the Long Beach Symphony from the insightful reviews posted here by David J Brown. But those who appreciate symphonic music and want to hear it played well should also be aware of the Bob Cole Conservatory Symphony, whose latest concert was at the Carpenter Center the other night.

Formerly the School of Music at California State University, Long Beach, the eponymous conservatory received a $16 million donation in 2008 from the estate of the Long Beach real estate investor Robert "Bob" Cole. The gift has enabled improved facilities and a renowned faculty, which has in turn led to the ability to attract the cream of the national crop of young instrumentalists, along with other good things.

There are a couple of reasons for this orchestra's excellence. An important one is a conductor who knows his stuff, a superb musician with a knack for training young players. That would be Johannes Müller-Stosch, who also leads the Orange County Youth Symphony and has a professional orchestra in Michigan. Then there's the talent and dedication of the players themselves. You hear the result in the skill of the solo winds, the firm tone of the brass, and the full, rich sound of the strings. Moreover, they play with a youthful energy that's infectious and a pleasure to witness.

This varied program was not an easy one. Franz Schubert's Symphony No. 8 in B minor, D. 759, ("Unfinished"), composed in 1822, is as introverted and classical as Erich Wolfgang Korngold's overture to The Sea Hawk is exuberant and Romantic. And then there's Petrushka. The second of the three big early ballet scores by Igor Stravinsky (1882-1971)—after The Firebird (1910) and before The Rite of Spring (1913)—is a challenge even for professional orchestras, and these kids hadn't played the work before; Müller-Stosch asked those who hadn't to stand, and it was everybody.

Petrushka is technically daunting and rhythmically complex, with kaleidoscopic shifts of mood and texture. The 1911 original version calls for a huge orchestra and multiple meter changes; a lot can go wrong. Here not much did, which is a tribute to the hard work of these gifted young musicians, and to Müller-Stosch's firm beat and command of the work's overall structure.

At first the playing seemed, perhaps understandably, careful and a bit tentative, but by the end things had become confident and vigorous. Along the way there was accomplished solo work from trumpet, flute, and piano, spot-on contributions from the percussion, impressive coordination between sections, and excellent execution by all concerned.

Before there was John Williams there was Korngold (1897-1957); the latter's lush symphonic film scores were a model for those who followed. And if this was a test to see if these strings and this brass section could approximate the full, rich sound of a studio orchestra, and if Müller-Stosch's young charges could play the sweeping, lushly melodic themes from Michael Curtiz's 1940 swashbuckler with something approaching abandon, they passed with flying colors.

For the Schubert (1797-1828), Müller-Stosch had been replaced by graduate student David Scott, who led a tidy, expressive, and well-modulated performance, highlighted by some lovely wind playing, especially from the clarinet. There was much to admire in his tasteful interpretation, but I did have one quibble: Scott should have observed the first movement repeat, which I consider essential.

The Bob Cole Conservatory Symphony is not just an excellent student orchestra; it's an excellent orchestra, period. It deserves a larger, and broader, audience than the moms, dads, and fellow students who were in attendance here. 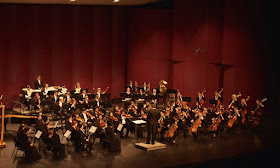