‘Tis the season… and along with everything else, for South Bay chamber music enthusiasts it’s when organist Namhee Han usually—though not invariably—makes her annual appearance in Classical Crossroads’ First Fridays at First!–fff lunchtime series. As previously (see reviews here and here), her program was highly varied and entirely unhackneyed, and on this occasion enhanced for the first time by First Lutheran’s thoughtful provision of a video feed for the audience to appreciate her nimble fingers (and, on occasion, feet—see below!).

Apart from his organ music, the extensive oeuvre of Sigfrid Karg-Elert (1877-1933) is unknown outside his native Germany—what, one wonders, are his orchestral, chamber and vocal works like? That works list is in considerable disarray, with lots of empty opus numbers and a few others doubled up, which brings us to his Valse mignonne, Ms. Han’s first item. Nominally from Karg-Elert’s Op. 142, you won’t find it in his Sempre Semplice, 12 Easy Pieces for Organ, Op. 142. Look again, however, and there it is as one of the Drei stücke für Orgel, also Op.142!

Valse mignonne was pleasantly dreamy—as the title indicates, its mood is bitter-sweet and French-accented rather than Viennese gemütlich—and the (to my ears) tendency to monotony in the piece was effectively disguised by Ms. Han’s frequent and imaginative changes of registration.

If Karg-Elert’s output can be likened to a sizable land-mass, then that of Joseph Haydn is a veritable continent in extent, though of course far more familiar. One of the smallest regions in its comprehensive Hoboken map is Hob. XIX, the Werke für die Flötenuhr, 32 brief pieces composed between 1772 and 1793 for the musical clock—as Ms. Han explained, an invention that in former centuries inspired works from many composers.

From an arrangement for organ by Desmond Ratcliffe of eight of them, she chose four of these Haydn miniatures. They were all over in as many minutes (slightly wrong-footing the audience), but she distinguished between them with subtle changes of registration, so that the chirpy No. 20 and No. 6 effectively and festively book-ended the more gentle and reflective Nos. 5 and 24.

There was, however, nothing gentle and reflective about El Tango de Los Tangos, one of the Twelve Tangos Ecclesiasticos written in 2000 by the Swiss organist and composer Guy Bovet (b.1942). This was a fearsomely gruff tour-de-force for the pedals only, and a snappy repositioning of the video camera showed Ms. Han’s feet as agile as her fingers, producing a quite astonishing range of sonorities.

William Bolcom, now aged 81, has throughout his career not merely accommodated but positively embraced a wide range of popular idioms in his works, from country to reggae, and often alongside the most uncompromising modernism (for all these and more, his mighty setting of the complete William Blake Songs of Innocence and of Experience is an experience to be savored!).

Ms Han has programmed Bolcom's music before in this series, and here she next moved to the piano stool for his 1970 Graceful Ghost Rag. This amiable piece dances wistfully with the shade of Scott Joplin, but on this occasion it could perhaps have swung a little more freely.

Then it was back to the organ console for the final item. The Victorian American composer Dudley Buck wrote his 10-minute Concert Variations on The Star Spangled Banner Op. 23 in 1868 at the age of 29, and in doing so entirely avoided the farcical irreverence that the even younger Charles Ives a couple of decades later brought to his variations on another patriotic tune, America. 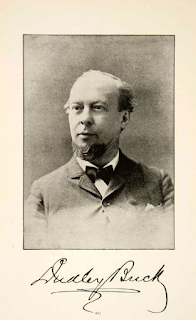 After a straightforwardly spacious full statement of the Theme, Variation 1 introduces a running bass in the pedals, adding to the sense of motion though without any marked tempo change. This arrives emphatically with the Poco vivace Variation 2, where the theme moves to the bass beneath scampering triplets in the treble; the bold changes of texture continue in Variation 3, which is introduced by a torrential growl in the pedals only.

Much-needed respite from all the activity comes in the final Variation 4, a prayerful, minor-key Adagio in which Buck indulges in some gorgeous suspensions and unpredictable harmonic shifts, after which the composer begins his expansive finale with a Fughetta of Bachian certitude that grows into a final grand statement of that Star Spangled Banner.

Again one speculated about the other works of yet another neglected composer; after his death in 1909 Dudley Buck’s many cantatas and other vocal and orchestral works gathered dust that's still there. Meanwhile, needless to say, Ms. Han was absolutely on top of his fine organ showpiece, using the full resources of the instrument for contrasting textures and timbres, and culminating in a literally all-stops-out coda. The audience clearly loved the piece, perhaps appreciating in addition to Ms. Han’s artistry the work’s implicit affirmation of enduring values in these, ahem, troubled times.


If you found this review enjoyable, interesting, or informative, please feel free to Buy Me A Coffee!
David J Brown