Four Hands, One Piano... and an Audience!


REVIEW
Latsos Piano Duo, “First Fridays at First!~fff,” First Lutheran Church, Torrance
DAVID J BROWN
Unlike the South Bay Chamber Music Society—which for its new 2021-2022 season has reverted entirely to the Society's time-honored format of mounting the same concert twice in two different venues over one weekend, before live audiences and without videotaping, preliminary or otherwise—Classical Crossroads Inc. are adopting a more cautious, step-by-step approach to their new seasons of "Second Sundays at Two" and “First Fridays at First!~fff” recitals.
The initial "[email protected]" concert of 2021-2022, by pianist Althea Waites, was videotaped in isolation and posted on September 12 for on-line enjoyment here, but both the first two “[email protected]!” concerts were recorded before small audiences of "Special Friends and Top Supporters." September's recital, by violinist YuEun Kim and pianist Sung Chang, can be heard here, while October's, a piano duo recital of works by Mendelssohn, Chopin, Debussy, Schubert, and Souza, was given last Monday and videotaped for posting on line on "First Friday", October 1.
The Latsos Piano Duo—husband-and-wife team Giorgi Latso and Anna Fedorova-Latso—previously appeared in Classical Crossroads' former concert series "The Interludes" in March 2019 (reviewed here), and on that occasion too they played what was the first item in this current recital, Mendelssohn's Andante and Allegro brillante in A major for piano four hands, Op. 92 MWV T 4, a work of the composer's maturity, written in 1841 at the age of 32.
They clearly have the piece in this form firmly in their repertoire—"in this form" because while the main Allegro assai vivace movement was published alone as Op. 92 in 1851, four years after Mendelssohn's death, the Andante section that precedes it in the composer's manuscript only achieved print in 1994. At their previous performance I found this too brief to counterbalance the long fast section, but on the other hand it seemed too lengthy to be just a "slow introduction."
Whether it was the performance or just me, this time around the Andante felt perfectly fine in that role, perhaps because with its clear recapitulatory structure the Allegro could easily have been the first movement of a never-to-be-pursued sonata, and as such the addition of a two-and-a-half minute slow introduction had plenty of precedents in Classical sonata-structure movements. Either way, the Latsos clearly love and were totally on top of the piece, the intricate cross-cutting of their 20 flashing digits as mesmerising visually as the intricate clockwork of Mendelssohn's musical pattern-making beguiled the ears.
Each member of the Duo followed this with a solo item. First, Giorgi Latso delivered a rambunctious, propulsive account of Chopin's 1842 Polonaise No. 6 in A-flat major, Op. 53 B. 147 that fully lived up to the work's nickname of Héroique. Interestingly, the Anglo-German musicologist Sir Charles Hallé (1819-1895) wrote: "Once Chopin told me that he felt very unhappy when he heard the grande polonaise in A flat major played fast, as it spoilt the whole grandeur and majesty of that noble inspiration." I think he might have liked Mr. Latso's interpretation.
Ms. Fedorova-Latso followed with a fleet performance of Ravel's Jeux d'eau M 30 that began appropriately Très doux but did, I felt, iron out some of the work's very wide dynamic range—from pp to fff, no less—and then the Duo rejoined for the program's longest item, Schubert's Sonata in B-flat major for piano four hands, Op. 30, D 617.
Schubert's catalog of works for the four hands medium is extensive—some 50 in number, including his very earliest known, the Fantasie in G major D 1. The present Sonata in B-flat major was written in 1818, probably for two young aristocratic pupils to play, and despite having been published in his lifetime (something sadly infrequent for Schubert's works) now seems to be somewhat neglected, to judge by the few recordings listed on ArkivMusic.
It was thus a particular pleasure to be acquainted with it, for the first time for this listener (there is always something new to discover in Schubert's vast oeuvre), and in a performance as affectionate as that of the Latsos—light on repeats, its three movements were all over in not much more than 16 minutes, no Schubertian "heavenly lengths" here! With technical demands (presumably) as modest for the players as the work is modest in scale, the Latsos' performance of Schubert's Sonata did nothing to prepare one for the virtuosity with which they tackled the final item. 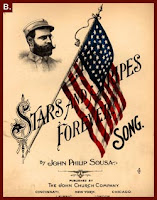 Again modestly described as a "4-hands arrangement by Giorgi Latso" of Sousa's Stars and Stripes Forever, he should have called it at least a "Fantasia" on the well-known quasi-anthem. Requiring co-ordination between the players as perilously immaculate as a Barnum & Bailey highwire act, the piece was as over-the-top and hilarious as Ives' similarly crazy Variations on America for organ. Any piano duo needing a knockout encore item should look no further. Thrill! Wonder! as you watch when it (and the other performances in this "First Friday" recital) go on line from 12:15 p.m. on Friday, October 1, here.
---ooo---
“First Fridays at First!~fff,” First Lutheran Church, Torrance, 12.15pm, Friday, October 1 (recorded Monday, September 27), 2021.
Images: The Latsos: artists' website; Mendelssohn, Ravel: Wikimedia Commons; Stars and Stripes: Library of Congress.
If you found this review to be useful, interesting, or informative, please feel free to Buy Me A Coffee!
David J Brown No comments:
‹
›
Home
View web version