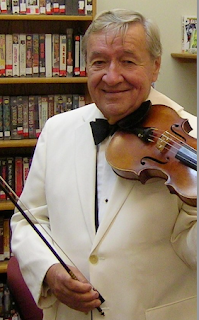 TRIBUTE: Raymond Gniewek
Metropolitan Opera, New York City
ERICA MINER
The loss of a much loved, respected musical icon, no matter at what age, is always a sad event. For those musicians who knew and worked with Raymond Gniewek, the news of his passing, just short of his 90th birthday, evokes much more than respect. It calls to mind admiration, appreciation, and untold reverence.
My entire life as a Met Orchestra violinist for 21 years centered around our incomparable concertmaster, Ray Gniewek. I will be forever thankful to have found in him such an extraordinary mentor. Memories of what it meant to work so closely with Ray in the first violin section of the Met Orchestra keep flooding back as I try to process the passing of this exquisite musician and wonderful person, whose loss I feel so deeply. Ray will always be in my heart. I envision him in violinists’ heaven, playing his solos like no one else can.
Ray often talked to us of his background, of his violin studies with the great Joseph Knitzer at the Eastman School of Music. He never made a big deal about the fact that he also had been accepted at MIT, which just added to his exceptional standing in our eyes. At the age of 25, he was the youngest concertmaster ever to be appointed at the Met. In his 43 years in the position, he never ceased to take that colossal responsibility seriously. That, in of itself, is both impressive and astonishing.
The Met, particularly its violinists, have lost a great guide and friend in Ray: a leader above and beyond what I could ever have imagined. He was our guiding light in the first violin section; so centered, so focused. A fine violinist and unexcelled concertmaster, Ray never, never missed. He was our rock. We could never lose our way with Ray at the helm. And his solos, especially in the fiendishly difficult Strauss operas, were incomparable. The sound he produced was exquisite, the technique flawless, and the overall musicianship striking.
It was a humbling experience to watch Ray in action. Even when he wasn’t playing his amazing solos, he was in the pit, devotedly practicing operas he knew inside out, always striving for perfection in his performance. As an example, Act 2 of Verdi’s Un Ballo in Maschera opens with a difficult passage divided in octaves, between each player on a stand, the upper octave very high in the register. Ray would practice playing both octaves of the passage simultaneously! It was mind-blowing. And we would just watch, listen, and learn, marveling at his expertise and the ease with which he executed the excerpt. That was Ray Gniewek.
There were also moments of levity. Often, during rehearsals for Verdi’s Aida, the Act 3 tenor’s “O Re, pei sacri numi” (“Oh King, for the sacred gods”) evoked smiles from music director James Levine, who would turn to Ray, beaming, and mime the words, “Oh Ray!” We would all smile in turn, knowing how apt the quote was: Ray was the absolute King of the orchestra, in every way.
But Ray also never faltered in his encouragement to us violinists to be the very best; he was a shining example of what we could aspire to. Even before I joined the Met Orchestra, I used to watch his performances from the Standing Room section in the uppermost reaches of the Family Circle. His playing was so stunning, so elegant, that it communicated hugely to me, even from that enormous distance.
Imagine how thrilled I was when I eventually found myself playing in the orchestra pit, able to observe him from up close, benefiting from his outstanding leadership. It was an opportunity and an experience I wouldn’t trade for anything. I remember numerous times when the rotation placed me on the stand right behind him. My stand partner forewarned me: I must play impeccably; Ray had eyes in the back of his head, and his finely tuned ears would detect the slightest flaw. In fact, I discovered, he had an uncanny ability to discern whatever was going on, even as far as the last player at the back of the section. It was that unique perspicacity that created such excellence in the Met’s first violin section.
The response and outpouring of emotion on social media about Ray’s passing have been heartwarming:
“Raymond Gniewek's name has been a hallmark for the excellence of the Met Orchestra's artistry and support of thousands of Met artists.” “He, more than any other player, was responsible for the Met orchestra moving into the ranks of the greatest orchestras in the world.” “As a concertmaster he was every conductor’s dream.” “Best concert master ever!” “Smart, secure—so secure—and unassuming” “Truly a legend.” “Incredible violinist and a great man.” “A consummate artist.”
In his final solo appearance at Carnegie Hall, Ray’s playing of the “Meditation” from Massenet’s Thaïs was even more gorgeous than in the version we had performed in the opera house. The audience response was overwhelming—and he brought his orchestra colleagues to tears.
The world of the Met, and the world in general, will not be the same without Ray. I will always miss him, but I also will celebrate the incalculable gifts that he so generously gave to me, both musically and personally.
Former Maestro Levine once was quoted saying, “The single luckiest things that happened to me since I have been at the Met is that Ray Gniewek was the concertmaster.”
That holds true for every one of us in the orchestra. May his memory be a blessing always. 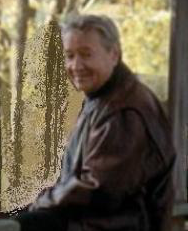