A Quartet of Beethoven Piano Sonatas

REVIEW
"Beethoven: Darkness to Light", Ory Shihor, Wallis Annenberg Center for the Performing Arts
DAVID J BROWN
This recital by the Israeli-American pianist Ory Shihor of four Beethoven piano sonatas (two early-ish, one middle-period, one late-ish, but not in that order) was predicated upon what I guess the movie industry would call a "high concept" idea: in the words of the pre-concert publicity, "Within each of the evening's four works, Beethoven counteracts an inevitable darkness with luminous light. Shihor is presenting these sonatas in pairs—a celebrated work with a lesser known one—further accentuating this metaphoric and musical chasm."
Fears that exaggerated expressive point-making might ensue were rapidly shown to be groundless. All four performances were clear, clean, and direct, with plenty of virtuosity when required, and Mr. Shihor's way of following each movement of every sonata attacca upon its predecessor, even when Beethoven doesn't actually ask for it (as in several cases here), further bonded each performance into a tight-knit expressive whole, as well as torpedoing any audience inclination toward clapping between movements.
In addition, he requested no applause between the sonatas in each pair, and thus the calm, almost off-hand conclusion to the second of the Sonata No. 27 in E minor, Op. 90's two movements segued, with not much more than a silent breath-pause, into the familiar opening of the "Moonlight", Sonata No. 14 in C-sharp minor, Op. 27 No. 2. Similarly, and just as effectively, the deceptively tentative opening to the great "Appassionata" Sonata No. 23 in F minor Op. 57 stole in on the heels of the almost gnomically brief rondo finale to the Sonata No. 12 in A-flat major Op. 26.
The "Moonlight" was particularly successful: Mr. Shihor's flowing tempo for the familiar opening Adagio sostenuto led naturally via the marked attacca subito into a fairly relaxed account of the brief .central Allegretto, instead of the wake-up jolt that more indulgent gazings at the moonlight engender in some performances. The Presto agitato finale, quite lengthy with its big repeat in place, had all the necessary voltage, making the total effect of this "Sonata quasi una Fantasia"—as the first edition, published soon after the work's composition, heads it—more like a work in two equal halves than in three separate movements.
But how far did these four works, in these juxtapositions, justify the "darkness and light" dichotomy or, conversely, did the concept illuminate them, and thus reveal something of Beethoven's creative wellsprings? As an introduction to the concert, there had been a half-hour conversation between Mr. Shihor and Classical KUSC's Brian Lauritzen, with additional contributions from Lucas Sha, a piano student and colleague of Mr. Shihor.
This opportunity to delve into how the "darkness and light" duality might be observed and felt in these particular sonatas was, I felt, something of a missed one. Mr. Shihor had gone back to Beethoven's manuscripts in preparation for the concert, and noted the ambiguity of his dynamic markings, but instead of illustrations from the keyboard, which would have been welcome, the conversation veered off into entertaining but not altogether relevant Beethovenian anecdotes—like the source of the stains on the "Appassionata" manuscript.
For me, abstract concepts like "darkness" and "light" don't really fit with Beethoven as we know him, unlike some aspects of, say, Bruckner's and Sibelius's music. Beethoven's giant personality is so immediate and omnipresent that what we take from his music are all aspects of a human response. The "Moonlight" nickname wasn't Beethoven's, but one might see this later Romantic epithet in the light of his own title to the first movement of the "Pastoral" symphony — "Awakening of cheerful feelings on arrival in the countryside" — a subjective human reaction, not an abstract description.
So taking the "darkness and light" dichotomy in terms of Beethoven's own shifting moods, the four sonatas in this recital were certainly revealing: sometimes suddenly, often transitorily, and even contradictorily, as in the first movement of Sonata No. 27, whose lengthy marking Mit Lebhaftigkeit und durchaus mit Empfindung und Ausdruck (With liveliness and with feeling and expression throughout) seems almost deliberately perverse, given that shades, doubts, and hesitancies are baked into the music—and were faithfully conveyed in Mr. Shihor's performance.
Sonata No. 12 is sometimes nicknamed "Funeral March" on account of its Maestoso andante third movement's heading "Marcia funebre sulla morte d'un eroe." Whether or not this can be heard as a sort of "dry run" for the "Eroica" funeral march, it is shot through with what seems personal anguish and bitterness rather than, say, the sort of stately ceremonial you get in Berlioz' Grande Symphonie Funèbre et Triomphale. Mr. Shihor again gave this aspect full value—accentuated by the penetrating "ping" of his Yamaha piano's upper register.
As for the "Appassionata"'s tremendous expressive gamut, from alternate musing and high energy in the first movement to what feels like rage, even hysteria, in the finale, Mr. Shihor once more had its full measure, though by the end his articulation was showing signs of the toll of playing so much demanding and many-sided music more or less continuously, and from memory. One probably shouldn't, therefore, complain about his omission of Beethoven's rare second-half repeat in that finale.
All-in-all, this recital was something of a triumph in performance terms, even with those doubts about its conceptual basis. And in these days, when even music as great as this is often treated as therapeutic aural wallpaper, a concert designed to make us actually think is a treasurable rarity... 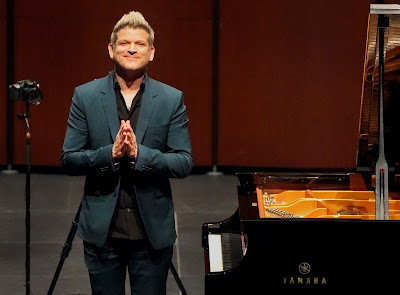