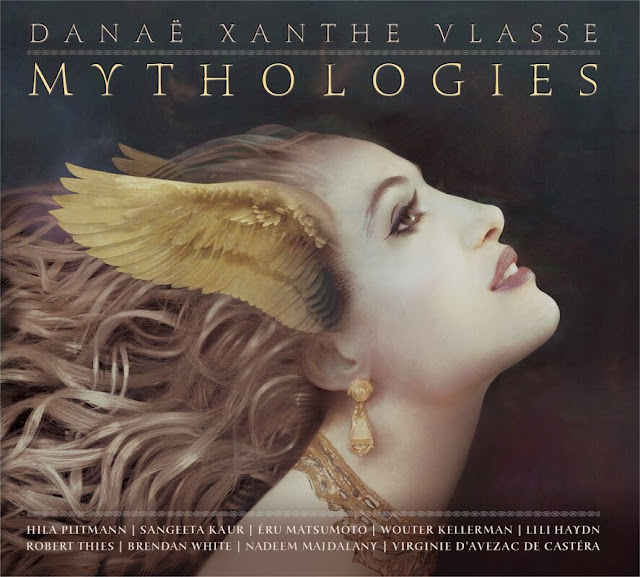 MYTHOLOGIES, a suite of seven vocal and instrumental works inspired by The Odyssey and other myths of ancient Greece, with music and lyrics by Danaë Xanthe Vlasse (left), received its live-performance premiere on October 21 at the Skirball Cultural Center in Los Angeles. Its CD and digital versions have been available since August 6 on the Cezanne label (CZ088).

In her introduction to an audience that seemed as diverse as a United Nations assembly, Vlasse credited the work’s inspiration to her own Greek origins. When the audience learned that her father was born on the same island of Ithaca that was home to the mythical Odysseus, her claim gained serious credibility.
In the composer's words, "MYTHOLOGIES celebrates some of the most lasting myths of history and invites listeners to ponder long-standing cultural concepts, such as idolized heroism, divine power, crisis of faith and morality, and the junction of fate and free-will."
Each of the work's seven pieces is a tone-poem unto itself, employing wide-ranging, yet cohesive, musical styles owing allegiance to Romanticism, Impressionism, and the Baroque, with a passing nod to the ethereal weightlessness of more modern sounds. Given the mix of styles, the work coalesces remarkably well in Vlasse's skillful musical voice, evoking the sense of an epic and timeless past.
Five of the pieces feature bracing duets for two lyric sopranos (the well-matched Hila Plitmann andSangeeta Kaur in both recording and live performance), whose stratospheric tessituras defy gravity as they send shivers up spines. At the performance, that high-flying melisma understandably occluded full comprehension of the subtle lyric poetry.  Fortunately, having printed lyrics on hand enabled me to follow the narrative. (For those interested, the CD, with its booklet with lyrics and impressive artwork can be obtained from the composer through her website: danaevlasse.com).
Anchoring the composer's instrumentals was a piano, complemented by violin, cello and an ancient lyra plucked by Vlasse at the live performance. All infused atmosphere and varying colors in each movement. (Flutes and percussion add even more colors on the CD version). At its live premiere, that piano’s arpeggiated runs, chordal exclamations, and busy hand-crossings were animated by one of the Southland’s most poetic pianists, Robert Thies. On the CD he shares duties with Brendan White and Vlasse herself.
Opening the program was the film screening of a 12-minute music video, featuring a slightly expanded version of the first musical composition, Sirens, that would begin the evening’s live program (and on the CD). The filmed Sirens features mermaids of Greek mythology swimming underwater, their liquid visuals tailored precisely to Vlasse's music. This film's production & post-production, Vlasse reports, had crews and professionals working on three continents. After this screening, the evening's purely musical program commenced, as reported in its live and CD versions in the narrative below. 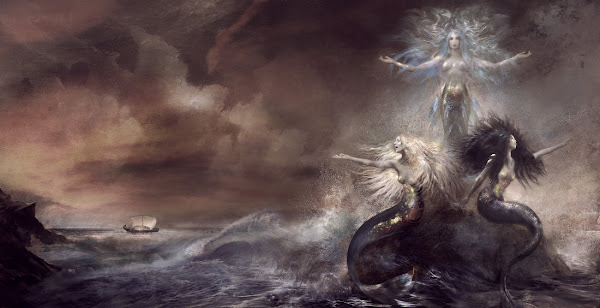 Narrative overview of the music and action in MYTHOLOGIES
Sirens – Rumbling piano arpeggios evoke a storm-tossed Aegean Sea. Two alluring sirens (Plitmann and Kaur) beckon weary sailors to join them in its treacherous, roiling waters. Part woman and part fish, these creatures rule the shadowy depths. As their agitated come-hither enticements reach a breaking point, a sharp clap announces the cracking apart of the reeling ship, with all souls lost.
Poseidon & Odysseus – Portentous slow murmurs from the concert's cello and piano (bass and contrabass flutes on CD) bode ill for the storm-tossed ship of Odysseus. As evoked by sopranos Kaur and Plitmann, a massive sea storm builds and capsizes it. Under the sea's thrashing surface, in calmer waters, the two sopranos eulogize the lost ship, with its sailors scattered in Poseidon’s sea. An Impressionistic piano and violin (high flute on CD) join the sirens. The slow 6/8-time denouement focuses on the survival of the sorely tried Odysseus. Its arrival on a hopeful Db Major chord gives promise that the hero's protective goddess, Athena, had saved him and will now guide him home. 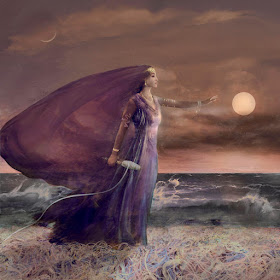 Penelope — The scene moves to Ithaca, as singers, piano and violin (flutes on CD) announce Penelope’s plight, as threatening to herself as the challenges facing Odysseus. She copes with the endless sorrow of his long absence from her, while also handling a more imminent challenge: how to delay insistent suitors to her hand in marriage. Penelope employs her feminine wit to stall for time until her husband's safe return. Arpeggiated piano swirls reveal the scheme: claiming she is duty bound to finish a funeral tapestry for a deceased relative before marriage, she works on it by day, while by night she secretly unravels her day's labor. In the words of Vlasse, Penelope “epitomizes loyalty to her own heart, trust in her choices, and a perceptive understanding of how to navigate social expectations while maintaining her power and defining her destiny.”
Nepenthe — A potion from the gods arrives at this worrisome moment. Nepenthe, the ancient Greek equivalent of getting a little opioid help from your friends, provides respite from the tension. Drinking it, mortals temporarily forget their troubles, depicted in musical terms by the classical trio configuration of violin, cello, and piano. For a brief moment, the weary protagonists forget all sorrow and pain. The music is an anthem in unabashed Romantic style, a march suggesting eventual triumph. Nepenthe ends on a reassuring E major, as if to provide cathartic relief. 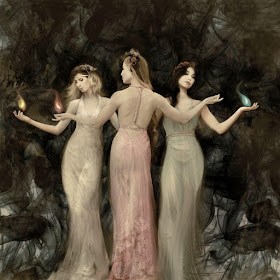 Euterpe’s Lament — Taking a step into today's current events, Vlasse invokes Euterpe, one of the eight daughters of Zeus and the patron saint of music, to remind us that all life's blessings are fragile. Such a moment has arrived in our own time with the global pandemic of 2020, still not gone at the close of 2021. For the arts, this long interval has been our own era's great storm, silencing concert halls and closing museums around the world. Vlasse's thoughts remain hopeful: "And after the storm goes away, together we will build the genuine beauty of human nature."
Metamorphoses — Due to time constraints this elaborate tone-poem was not included in the live program at the Skirball. It is the most dense (in a good way) musical statement on the CD. The Roman poet Ovid, born a millennium after Homer, paid homage to his own era's inherited Greek myths in his Metamorphosen Libri, a history of the world in 250 myths. Vlasse's theme and variations on two themes by Baroque composer Georg Philipp Telemann, (as important in his day as were Bach and Handel) takes its inspiration from Ovid's homage to Homer.
In purely musical terms, Metamorphoses is one of the most interesting (certainly the most academically learned) work on the CD. Its first variation on Telemann elaborates with more filigreed urgency. Later variations increase the tempi and frivolity. The fifth one takes a solemn approach, and so on through several more, all brilliant in their resemblance to authentic Baroque-era statements. New variations, surprisingly playful, revel in later styles. Scalar runs and intense repeated chords go off the tracks, and thrillingly, in virtuosic Liszt-like abandon. Chord clusters fly about as if Rachmaninoff had just arrived on the scene. Impressionistic filigree climbs up the range of the piano to surprise us with a sudden hint of a flirtatious Gershwin rag tune. The tour-de-force closes in a quiet, bluesy reverie that might well have been the musical backdrop for that lonely, late-night couple in the Edward Hopper painting. A terrific journey.
In her notes on this piece, Vlasse declares that “the structure of the music is designed to evolve in a way that parallels the natural transformation of stories, as each generation imprints new perspective upon history.” Indeed, much music history, with its ancient world stories, is fast-reeled in this charming episode.
Sirens (cinematic version) — The final track of the album is an extended version of the first track, with a significant instrumental opening to set the mood to come. An elaborate piano part with evocative percussion instruments (glass harp, rain stick, ocean drum, and thunder sheet) convey the visceral cinematic experience. The return to the earlier music of the sirens as final statement for the evening (and CD album) lends the project a cyclic feel, bookending the impressive MYTHOLOGIES survey.

New comments are not allowed.