CD REVIEW: Stephen Powell
Acis
ERICA MINER
Vocal artists who accompany themselves on the piano are relatively rare in the classical world as compared to the non-classical world. In his latest CD release on Acis, Why Do the Nations, Grammy-nominated baritone Stephen Powell demonstrates that this can be accomplished in the classical genre—perhaps even for the first time in history. It helps, of course, to have one of the most superb baritone voices on the planet. That splendid voice remains Powell’s strong suit in this endeavor.
Powell’s raison d’être for the album containing 27 art songs from 11 nations is to “speak to the universal themes that can heal a broken world: love and longing, peace and prosperity.” The baritone seeks to demonstrate that these themes can unite the world’s peoples across traditional boundaries of nation, race, sex, and gender. This is a tall order, but Powell delivers on his promise with a stunning array of international airs that please the ear and capture the imagination.
Puccini is most familiar to music aficionados as an opera composer, but the two chosen tracks, Morire (“To Die”) and Terra e Mare (“Earth and Sea”) give the composer’s work a different perspective. From the first words, Powell’s lush, ravishing voice comes across in its finest sheen. He then challenges himself further by ending on high notes in the upper register: a difficult feat.
Not to be outdone in the Italian vein, Verdi adds his greatness in the lilting Il Poveretto (“The Poor Little Man”) and La Seduzione (“The Seduction”). Powell shows his operatic chops to advantage in both, evoking pity for the forgotten soldier as well as for the betrayed, innocent young girl.
In Ravel’s Chanson à Boire from Don Quichotte à Dulcinée, Fauré’s Mandoline and Paladilhe’s Petits Enfants, Powell creates the subtleties and liveliness of the French tradition. Quichotte’s declaration, Je bois à toi! (I drink to you!) shows a youthful energy that can convince any ideal woman of his ardor, even coming from an old man. He then beautifully conveys tenderness and delicacy: of that instrument of serenaders, the mandolin, and in his tribute to the gifts that newborn infants give to the world.
Germany is well represented in the mix. Powell portrays profound emotion in Richard Strauss’s Mahlerian Ich Trage Meine Minne (“I Carry My Love”). This touching refrain merges exquisitely with strains of famous art song creators Schubert—the universal favorite Die Forelle (“The Trout”)—the Brahms paean to love, Mein Liebe ist Grün (“My Love is Green”) and Hugo Wolf ‘s Auch Kleine Dinge (“Even Small Things”). All were rendered with true loving affection
From Spain, De Falla’s familiar, swingy El Paño Moruno (“The Moorish Cloth”) displayed Powell’s virtuosity both vocally and pianistically. The baritone floated the high tones charmingly in Obradors’ ¿Corazón Porqué Pasáis? (Heart, Why Do You Spend?)
Russian art song was embodied in arias from two of its most beloved late Romantic composers, Tchaikovsky and Rachmaninoff: respectively, Nochi Bezumnyye (“Nights of Frenzy”) and Vesenniye Vody (“Spring Waters”). Both powerful songs demand feverish, unbridled urgency. Powell was up to the challenge, and the difficult high notes were rendered with full-out passion. 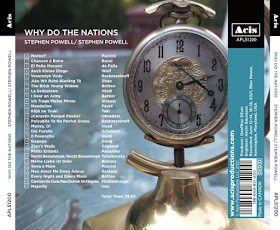 Outside of the Continent, Britten’s The Brisk Young Widow and Michael Head’s Money, O! were sung briskly, combining satirical flair and lyricism.
In addition to the above, Powell shows his versatility with an unusual mix of less frequently heard songs from China, Japan, and Korea, ending the selections with a satisfying mixture of music by American composers Charles Ives, Samuel Barber, and Aaron Copland. The latter’s Zion’s Walls packs a punch with its military declamation. Likewise, Barber’s I Hear an Army asks a hard question, “Why have you left me alone?”—perhaps our planet’s cry as to what we have perpetrated on her.
Powell ends the entire collection boldly and powerfully, with a strong, dissonant statement from Ives in his Scriabin-like Majority: “The Masses are singing, Whence comes the Art of the World! The Masses are yearning, Whence comes the hope of the World!” 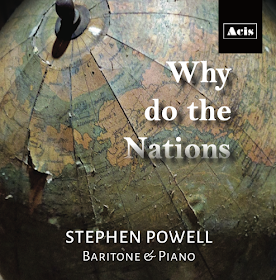 The overall message Powell so compellingly communicates in this stunning collection shows that in the end, the ancient refrain of music’s universality holds true even in today’s troubled world. If Why Do the Nations is as widely disseminated and carefully listened to as it deserves to be, there may be hope for our planet after all.