REVIEW
Ambroise Aubrun, Steven Vanhauwaert, “First Fridays at First!~fff,” First Lutheran Church, Torrance
DAVID J BROWN
Like the previous concert in the “First Fridays” series from Classical Crossroads, the November recital was recorded in advance before an invited audience, duly masked and Covid-vetted. Due, however, to another and rather more common virus, the previously announced performers had to withdraw until a later date, and the slot was filled at very short notice by the highly skilled team of Ambroise Aubrun (violin) and Steven Vanhauwaert (piano).
The main items in their program were sonatas by Mozart and Brahms, but for me the greater interest lay with the short encore piece, Menuchim’s Song by the Austrian-born Eric Zeisl (1905-1959). This passionately eloquent vignette gave a tantalizing glimpse of the unfinished magnum opus by a little-known member of the great cohort of Jewish creative artists who sought and found sanctuary abroad from the Nazi tyranny, in Zeisl’s case settling like many others in Los Angeles.
Amongst a large roster of other music—solo vocal, choral, instrumental, chamber, orchestral, stage and film—Zeisl began work in 1939 on his opera Job, based on the eponymous novel by Joseph Roth (1894-1939) (also Jewish and Austrian-born) but had completed only two of the planned four acts by the time he died. The “Job” figure in the novel is a Jewish religious teacher who suffers both physical hardships and a crisis of faith when he emigrates from Eastern Europe to New York; Menuchim is the son who eventually helps to restore his father’s faith. 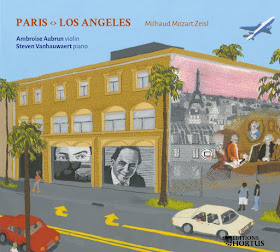 Job has been completed and was staged in Munich in 2014, and the vivid immediacy of Menuchim’s Song in the hands of Vanhauwaert and Aubrun certainly whetted one’s appetite to hear more of Zeisl’s music; fortunately this is possible on their Hortus label CD (right), which contains not only Menuchim’s Song but also the large-scale Brandeis Sonata for Violin and Piano (1950) as well as a movement from his (very) early Suite, Op. 2.
The disc’s title “Paris <> Los Angeles” references the exiled Zeisl’s arrival first in Paris in 1938, where he was befriended and supported by his fellow Jewish composer Darius Milhaud, and then the final move to LA. Milhaud in his turn fled to California in 1940, where the friendship between the two continued until Zeisl’s death. (I am indebted for all this information to M. Aubrun’s CD booklet notes, his doctoral thesis on Zeisl's String Quartet No. 2, and the Zeisl website.)
The final work on the CD is Mozart’s Sonata for Piano and Violin No. 21 in E minor, K. 304—included because it was, we are told, Zeisl’s favorite violin sonata—and it was with this that M. Aubrun and Mr. Vanhauwaert began their “First Fridays” recital. Omitting a major repeat (which they observe in the recorded performance) only served to make this account of the two-movement sonata all the more concentrated and homogeneous, the serene melancholy of the opening Allegro complemented by the Tempo di Menuetto’s limpid pathos.
No less unified and economical (“doing more with less”, as Mr. Vanhauwaert noted in brief preliminary remarks) is Brahms’ Sonata for Piano and Violin No. 2 in A Major, Op. 100—and as with the Mozart the primacy of keyboard over strings in the work’s titling is justified by the frequency with which the former takes the lead in presenting and developing thematic material.
The performers brought out fully the work’s gracious, song-like character, with no real change of mood across its three movements—their respective headings of Allegro amabile, Andante tranquillo, and Allegretto grazioso (quasi Andante) clearly signal the prevailing lyricism. Any chance of monotony is avoided, however, by the way Brahms folds what amounts to a scherzo into his nominal slow movement by the insertion of a twice-repeated Vivace section—and you can almost see him grinning wryly into his beard when, just as the movement seems to be settling into a final quietude, he brings back a mere seven measures of the Vivace to end. Delicious.
You can catch this “First Fridays at First!~fff” recital by Ambroise Aubrun and Steven Vanhauwaert when it goes live at 12.15 p.m. on Friday, November 5: come for the Mozart and Brahms, but stay for Zeisl…
---ooo---
“First Fridays at First!~fff,” First Lutheran Church, Torrance, 12.15pm, Friday, November 5 (recorded Monday, November 1), 2021.
Images: The performers: Courtesy Linda Wehrli, Pastimes for a Lifetime; Zeisl: Composer website; Brahms: Wikimedia Commons.
If you found this review to be useful, interesting, or informative, please feel free to Buy Me A Coffee!
David J Brown