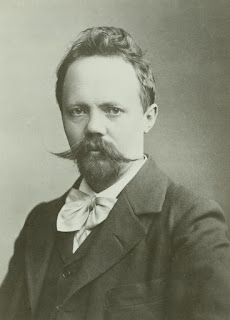 Child poverty, neglect, and murder, a subtext on the duality of hunger and greed (not to mention cannibalism), food used as child bait, and a final opportunistic act of geronticide—clearly these are perfect ingredients for a family entertainment, and indeed Engelbert Humperdinck (1854-1921, right) in Hänsel und Gretel so sweetly baked his concoction, and so liberally sprinkled it with fairy dust, that it retained barely a hint of Grimm seasoning and remains the perfect holiday event.
It certainly was in Artistic Director Josh Shaw’s brightly colored and energetic production for his Pacific Opera Project. This object lesson in maximizing limited resources was staged outdoors on the terrace at the top of Forest Lawn in a chamber ensemble arrangement by Kathleen Kelly, and doubtless with fingers crossed that it wouldn’t be chilled out by early onset of winter or blown away by the Santa Ana winds.
On the last of its four-evening run, which we attended, the late-November chill had relented a bit from previous nights, but the winds, funneled through Forest Lawn’s avenue of buildings into the performance area, did send some empty cans rolling and paper napkins flying from the picnic tables at which most of the capacity audience were seated.
Fortunately the wind was not so strong as to seriously threaten the set, a construction robust and versatile enough to earn a round of applause each time it metamorphosed—from hut exterior at the outset to hut interior, via the folding out and sideways deployment of its two front halves; to forest backdrop revealed when the halves, closed again during the “Witch’s Ride” entr’acte between Acts One and Two, folded out a second time; and finally in Act Three after the interval, when it became the exterior of the gingerbread house and finally its interior by the same hinged means.
Another strength of the performance—and of POP’s productions in general in my experience—was the skilled choice of singers for parts. Hänsel und Gretel’s first scene always seems to me to go on a bit, with nothing except the titular siblings dancing around and singing about how hungry they are, and with a large number of potentially restive kids in the audience I did wonder how attention-spans would hold up—particularly as it follows straight on from the substantial overture, which exposed the limitations of the chamber arrangement (string quartet, three winds, and keyboard played by Music Director Brian Holman) with no stage action to divert attention. 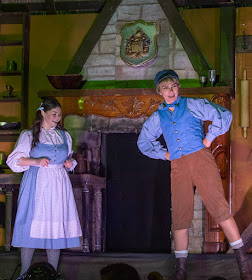 However, the expertly cast duo (left) of Emily Rosenberg (soprano, Gretel) and Kara Morgan (mezzo-soprano, Hänsel) energetically interacted until the arrival of Mother (Erin Theodorakis, mezzo-soprano), who knocks over the milk-jug while scolding and chasing the children and then sends them out into the forest to find berries. In due course, boozy broom-maker Father (Daniel Scofield, baritone, in stentorian form), arrives home and, between swigs, sounds the alarm about the child-devouring Witch who lives in the forest.
Hänsel und Gretel’s roundabout genesis began with a request in April 1890 from Humperdinck’s sister Adelheid for music to accompany some nursery rhymes she had written. Building upon his interest in composing a comic opera, other family members later joined Adelheid in putting together the libretto for a singspiel based on the Grimm fairytale, and with more music composed for this, the result was a family entertainment for Christmas, 1890.
Humperdinck became further engaged in developing his planned opera around the songs already written, and over the next two years gradually assembled the work between his day jobs of teaching and review-writing. All this goes towards explaining the somewhat patchwork nature of the plot, but also the eventual success of Hänsel und Gretel, with its indelibly tuneful score.
One element injected at the singspiel stage and not present in the Grimm original was the dream pantomime, with angels and the Sandman—portrayed in this production by soprano Anastasia Malliaras as a sort of rickety elf in tights and frock coat, crowned by a top hat of Dickensian eccentricity (below)—lulling the forest outcast children off to sleep. This was particularly successful, with pointilliste light effects sprinkled over the audience and the Dew Fairy (Brooke Iva Lohman, soprano) wanding her benedictions from the top of the forest backdrop. 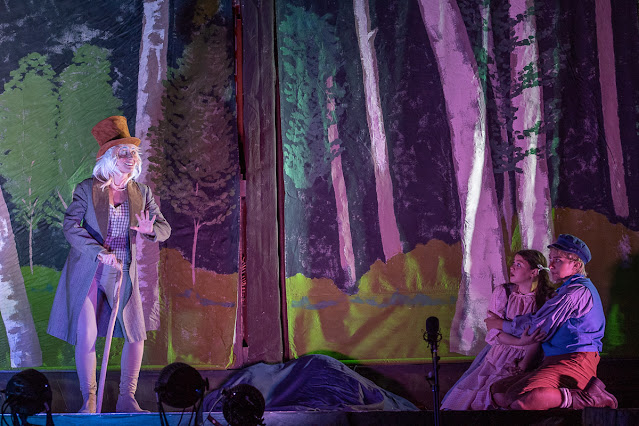 This underlined the production's one disappointment—that nothing was made of the “Witch’s Ride” other than it aurally accompanying some darkened fumblings at the back of the set: surely at least she could have malevolently peered over the top of it? However, when the Witch finally appeared in Act Three, mezzo-soprano Melanie Ashkar—first in sweet old lady guise and then in full black pointy-hat witch get-up in the gingerbread house interior (below)—gave the part her all... 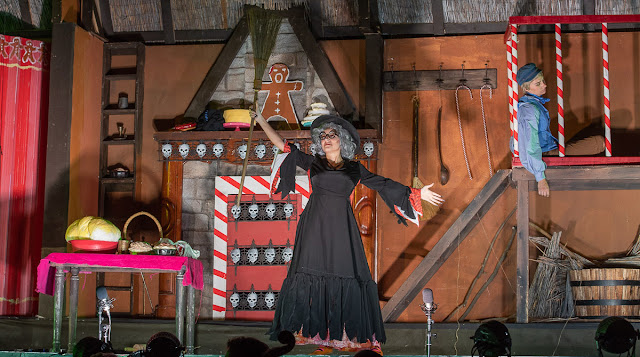 ... as indeed, the production made the most that could be done with the hasty, and frankly perfunctory, way Humperdinck builds up to and then despatches the Witch by having Gretel shove her past its skull-decorated door into the oven. The final scene, with the liberation of the other lost children from gingerbreadhood and the immolation of the Witch into edible form, was the textbook happy ending (below), enthusiastically applauded by the capacity audience. 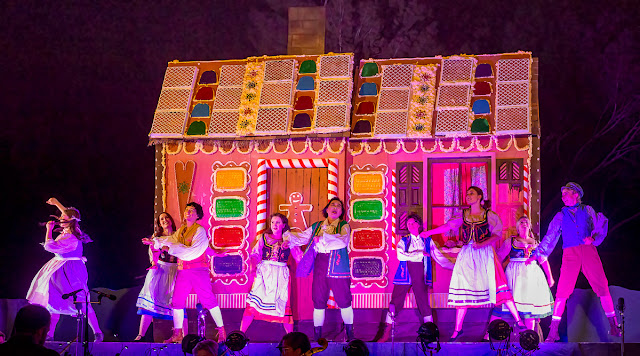 This, all the way from the perfectly floated horn solo that launched the Overture to the end of the work, was another signal success for POP, and made one look forward eagerly to what is by far the most intriguing item in its current Fairytale Season, a rare outing for Tchaikovsky’s final opera, the one-act Iolanta, to be staged at the Aratani Theatre in late March 2022 with the blind soprano Cristina Jones in the title role, and what looks to be something approaching the composer’s full orchestral requirements. Don’t miss it!
Pacific Opera Project, Forest Lawn, Glendale, 5:00 p.m., Sunday, November 21, 2021.
Images: Production photos: Martha Benedict; Humperdinck: Wikimedia Commons.
If you found this review to be useful, interesting, or informative, please feel free to Buy Me A Coffee!
David J Brown