The LBSO Return, with Coleridge-Taylor and Beethoven

REVIEW
Long Beach Symphony Orchestra, Terrace Theater, Long Beach Performing Arts Center
DAVID J BROWN
The Long Beach Symphony management team seemed to me barely to put a foot wrong in how they handled the Covid-related challenges and pitfalls of returning to live performance for the inaugural concert of the orchestra’s “welcome back” 2021-2022 season.
Out went both the pre-concert talk and the concert interval, on the grounds of minimizing the chance of any infections spread between audience members seated for the former and milling around during the later; in came a pre-concert “party” outside, where the ample terrace of the eponymous theater had plenty of room for food trucks, drinks stations, and seating around fire pits that on such a warm evening were useful more for their decorative, welcoming appeal than any need for actual heating.
The only things to be regretted were the abandonment of printed programs in favor of hovering your smartphone’s camera over a QR code on a small leaflet to access the online notes—a step too far in the pursuit of touchless nirvana—and the necessarily truncated duration of the concert itself. However, for the latter, the LBSO players under their Music Director Eckart Preu more than made up in quality what was lacking in quantity.
After what seemed a somewhat more fervent than usual "Star-Spangled Banner", the LBSO’s particularly sonorous tam-tam at a healthy fortissimo ushered in Copland’s Fanfare for the Common Man, the plain-spoken, defiant heroism of which seemed entirely appropriate for the occasion. Then we were on to the serious meat of the concert, which was held in memory of Ernest F. Ehrhardt Jr., tenured cellist with the orchestra for almost 50 years.
The life of the Afro-English composer Samuel Coleridge-Taylor (1875-1912) had the most inauspicious of beginnings. The illegitimate offspring of a Creole doctor from Sierra Leone—who returned home seven months before Samuel was born and probably never knew that he was to be a father—and the 18-year-old daughter, herself also illegitimate, of a South London farrier, he nonetheless evinced exceptional musical talent from early childhood
This was nurtured by his maternal grandfather, a keen amateur musician. After himself teaching the boy the violin, he engaged a professional tutor to progress his grandson's studies, and by the age of 10 young Samuel was playing, and singing, in his school and at church. At only 15 he entered the Royal College of Music, and three years later gained a composition scholarship there.
Music poured from Coleridge-Taylor’s pen, earning the approbation even of the famously exacting Professor of Composition, Sir Charles Villiers Stanford. His Symphony in A minor Op. 8 was performed at the RCM, and his Clarinet Quintet in F-sharp minor Op. 10—composed in direct response to a challenge by Stanford to write a quintet not influenced by Brahms’ Clarinet Quintet—was met with “You've done it, my boy!”
Advocacy by Elgar, and more specifically Alfred Jaeger—Elgar’s “Nimrod” in the Enigma Variations—secured a commission for an orchestral work at the 1898 Three Choirs Festival, and the result was Coleridge-Taylor’s Ballade for Orchestra in A minor, Op. 33.
One critic of the premiere, conducted by the composer, called the piece “stimulating, highly coloured” and with “barbaric moments”, while another deemed it “a striking work, [with] a masterful force and half untamed and fiery exuberance that give it memorable distinctiveness”—reactions that doubtless also reflected the Victorian audience’s startled reaction when the young man’s ethnicity was revealed as he strode onto the platform.
The Ballade in form lies somewhere between symphonic poem and an extended scherzo-and-trio, and introducing it to the Long Beach audience last Saturday, Eckart Preu launched the LBSO’s performance with all the energico asked for in the score. The wind and brass attack on the Allegro vivace opening complex of “scherzo” themes, tinged with Dvořákian harmonies, was bitingly unanimous, and no less memorable and committed were the strings' embrace of the romantically soaring dolce “trio” section.
Maybe the Ballade’s themes, however memorable, come around once too often, but Coleridge-Taylor’s claims on present-day audiences could not have been more convincingly demonstrated—and perhaps even more specifically for an American audience, given the startling success of his career not only in England but also in the US, where over three visits in 1904, 1906, and 1910 he wowed both listeners and performers, most importantly as a role-model inspiration for Black musicians of the time. (For the full story, it's well worth watching a remarkable two-hour documentary "Samuel Coleridge Taylor and His Music in America, 1900–1912" on YouTube here.)
The Ballade, however, was just the prelude to a performance of Beethoven’s Symphony No. 7 in A major, Op. 92 that was simply thrilling. Wagner famously called this work “the Apotheosis of the Dance”, and it is often referred to in terms of human joy and exuberance. But beyond this, and perhaps more than any other work you care to name, this symphony seems to tap into, release, and form a conduit for some inexhaustible source of pure energy, ever renewable and renewing.
Everything stems from the slow(ish) introduction—at 62 measures the longest that Beethoven ever wrote—but with its grandiose tonal architecture, emphatic unisons, and multiplicity of rising dotted scales, this majestic poco sostenuto is as much a statement in itself as preludial to what follows. Preu’s forward-pressing control of tempo, and the orchestra’s mastery of rhythmic articulation, brought off this balancing act perfectly, and when Beethoven’s faux-hesitant hints of the main movement’s rhythm finally ushered it in, the fairly measured tempo for the Vivace made it the inevitable continuation of a seamless whole.

Preu made an applause-thwarting attaca into the slow movement, whose Allegretto marking he took at face-value so that it became an evenly-paced processional, always leaning forward, rather than the solemn dirge of some slower performances. His avoidance of any slowing for the clarinet-led major-key interludes that contrast with the solemnity was just as welcome as his refusal to slam the brakes on for the scherzo’s trio section, where the LBSO winds screaming at the top of their lungs above the timpani’s roar made one marvel for the umpteenth time that Beethoven achieves this with an orchestra no larger than Haydn’s in his “London” symphonies.
The great English musicologist Sir Donald Tovey wrote that “the finale is and remains unapproached in music as a triumph of Bacchic fury”, and for once the LBSO and Preu’s headlong dive into this movement made it really live up to that description. His observance of the exposition repeat, quite rare in performances of this finale, only prolonged the excitement (as the comparable repeat in the first movement also had done), and the orchestra’s machine-gun punch for the final measures triggered an ovation, Preu looking as surprised as he was pleased as the audience on their feet brought him back for a third time. They are back! 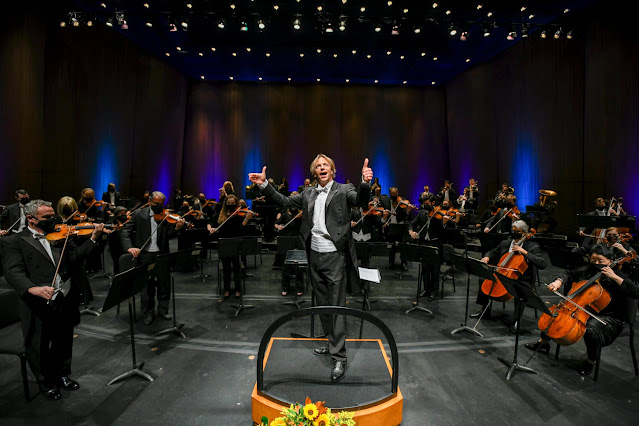