A New Violin Concerto, or Born of Fire in Budapest

TODD MASON
The Los Angeles-born, Juilliard-trained composer Todd Mason has written a substantial body of music including numerous chamber works for various ensembles (among them three string quartets), vocal compositions, and pieces for string orchestra. Since 2014 he has hosted an annual series of chamber concerts, some including his own works, in his Mar Vista home (reviewed here, here, here, here, and here).
During the long Covid shutdown, Todd Mason embarked for the first time on a large-scale, purely orchestral work, and this article traces the journey of his new Violin Concerto from its inception in locked-down LA to a recording venue in Budapest, Hungary during Europe's summer 2022 heatwave.
IMPETUS
During the pandemic, I finally set myself to writing a violin concerto, something I’d been wanting to do for years but never seemed to have enough time to focus on such an ambitious project. Plus, I felt that I was still learning about the myriad complexities of a large-scale work for orchestra and soloist, not to mention the intimidating fact of so many epic concertos already in the literature. I knew this new piece had to be something very special!
I asked myself the most fundamental question: “What is a violin concerto?” It obviously has to be a piece that features the instrument, and presumably with full orchestra to enhance and color it. But it has to be more than merely pretty, for example, or just fast; it should take the listener on an exciting and engaging journey to interesting and unique places, and of course give the soloist opportunities to showcase what the violin is capable of. So I studied many of the famous scores, and some not so famous, and ultimately came up with something that I felt had my own compositional voice and a compelling musical story.
CREATION
I've always been as much drawn to single-movement as to multi-movement structures, and what emerged was a continuous 22-minute work with sharp contrasts in emotion and harmonic language, but also with a steady and driving element that involves a recurring motif, of four rising notes, which becomes a kind of glue, in many forms, for the whole piece.
The rapid but pianissimo opening, complete with a quiet gong, is largely atonal with thick washes of 16th notes in the strings and clarion brass accents creating a high intensity of energy. When this simmers down, the soloist enters and the mood gives way to a slower, richer, melodic polyphonic texture above which the violin sings. A pensive, soul-searching meditation, with ever-building tension, gives way to a mini-cadenza that leads suddenly into a faster, playful, and rhythmically contrasting section with short off-kilter chords—the orchestra battling against the soloist.
Then another big change comes: a very emotional and slower, almost hymn-like section reveals an entirely new sonic world, embracing more traditional tonalities and in which the soloist engages in a very agreeable dialog with the orchestra. But the violinist also decides when that’s over too, and a new, somewhat eerie, section leads to a grand, designedly virtuosic cadenza and an even grander finish. My view of a "good concerto" is that it's largely about the interesting struggle for dominance between soloist and orchestra—and that in the good concertos the soloist always has the last word!
This project certainly kept me busy during much of the pandemic, even if I had no idea how I would ever get it performed. I worked on it for four months without interruption in the spring of 2021 and completed it at around the time I was able to get my first Covid vaccine jab.
NEXT STEPS
All good. I was very happy with the concerto. But how to bring it to the concert hall? I tried not to keep in mind that, after a very unsuccessful premiere it took almost 40 years before Beethoven’s Violin Concerto finally had a good performance with the 12-year old prodigy, Joseph Joachim. Unfortunately for Beethoven, he never heard (or saw) that celebrated performance. Needless to say, for the composer, getting a trio or string quartet performed is quite a bit of an easier proposition than a new full-length concerto with full orchestra. 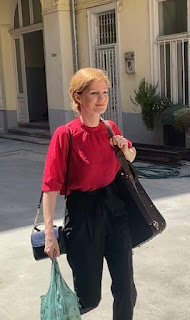 The next step involved some luck and serendipity. I needed a top violinist. As it turned out, two dear music friends, both fellow Juilliard alums, in different countries, were the first people I asked for recommendations, and although they didn’t know each other personally, both suggested the same violinist, a young Dutch soloist by the name of Tosca Opdam (left), another Juilliard alum! And, equally fortunately, after I sent her the score and a rough computer realization (which never sound particularly great), she said she was interested in the project.
However it’s one thing—and perhaps the comparatively easy thing—for a composer to write a technically demanding piece such as a concerto, but it’s quite another for a soloist to actually find it compelling—a good concerto—and be interested enough to help find ways to make it technically playable and then want to perform it.
A whole year went by and, partly because of the pandemic continuing, it was still difficult to move forward with this project. Few orchestras were performing publicly, and from its outset early this year the Russia/Ukraine war was causing considerable worry across Europe, where any recording would be made. But then things began to look more promising.
NEGOTIATION
Using Zoom calls and numerous emails, Tosca and I slowly went through the entire piece to make the violin part as idiomatic as possible. The wonderful thing about a top soloist is that they have suggestions that the most experienced composers simply would not know about. Is this double stop actually playable after this double stop? Can you play these non-intuitive semi-chromatic arpeggios at this tempo? Will these high notes work as harmonics?
Tchaikovsky‘s Violin Concerto, for example, was turned down by two violinists who thought it unplayable, which certainly didn’t help the composer‘s mood. He struggled to rewrite certain passages, but when it was finally premiered, the review was savage: “The Russian composer Tchaikovsky is an inflated talent, without discrimination or taste. Such is also his long and pretentious Violin Concerto … vulgarity gains the upper hand. The violin is no longer played; it is pulled, torn, shredded.”—Vienna Free Press.
I had a bit of a similar worry about the playability and listenability of my concerto because the very fast tempo made certain passages extremely difficult; the soloist, rightly so, suggested reducing the pace slightly in places so all the notes could be heard. But then, if it had to go more slowly, I feared it would lose some of its personality and energy.
REALIZATION
Nonetheless, a year after finishing the work, a window of availability opened up to make a recording this July. Such a real performance is extremely useful to promote a new piece for live concerts, and it also helps the composer iron out numerous crucial details before going public. So I went ahead and lined up the Hungarian orchestra that had done such a marvelous job on my Chamber Suite for String Orchestra, and we went ahead and set out for Budapest. 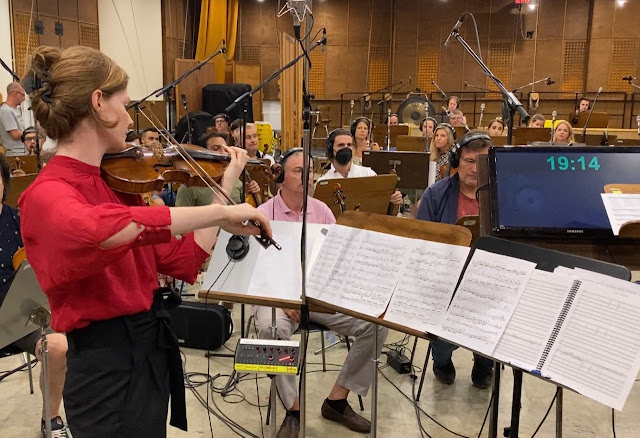 Then, very quickly came the news of massive flight cancellations, which caused additional worry! But we somehow got our flights without losing our suitcases, scores, or violins—and then suddenly realized we were flying into one of the worst heatwaves ever to hit Europe. I guess we lucked out a bit because on the day of the recording it was only 100°F in Budapest... 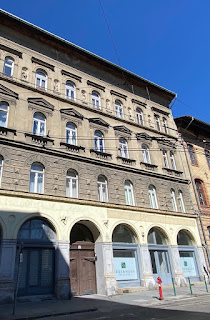 This orchestra, The Budapest Scoring Orchestra, specializes in high-quality new classical music recordings and film scores, similar to the top studio orchestras in Los Angeles. The players—drawn from the prestigious Budapest Philharmonic, the Budapest Opera Orchestra, the Hungarian State Philharmonic, and a contemporary music ensemble called Concerto Budapest—are all remarkable sight-readers.
The classical music tradition in Hungary is strong and at a very high level, and as a result it has an illustrious record of producing some of history's greatest classical musicians, conductors, and composers: names like Franz Liszt, Béla Bartók, and Eugene Ormandy, to mention just a few, and also Zoltán Kodály, who in fact designed the very studio (exterior, left) where our recording was made.
Despite the heat—the studio A/C was only partly able to keep up—over five hours Tosca Opdam and the orchestra under its superb Hungarian conductor, Peter Illényi, made this new and challenging concerto come alive in marvelous ways I didn’t even think possible. It was like drinking out of a fire hose: extremely intense but enormously exciting to hear the work for the very first time. 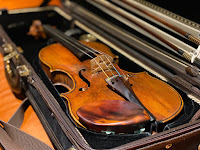 And then even better news… Tosca somehow did the impossible and navigated all the difficult passages at full tempo on her rare Matteo Goffriller violin (right). The result was utterly thrilling. While Illényi was fluent in English, the musicians mostly spoke Hungarian only, so there were rapid-fire discussions back and forth in both languages (which sound worlds apart!) but all negotiated deftly by Illényi.
Where we all communicated in the same language was through the music, perhaps partly because I’ve always had an echo of Bartók in my music and they understood that perfectly. Fast, semi-chromatic runs and tricky rhythms, no problem. Stacked polyphonic divisi sliding chords, fine! But, more importantly, the very spirit of the music was intuitively embraced by these skilled musicians. 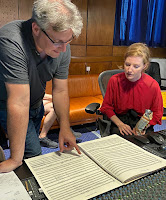 After the session, Peter Illényi said “I hear a kind of Bartók in your music,” to which I replied “Well, that’s not surprising because he is one of my heroes.” I think he was very happy to hear that. In the lobby of the recording studio is a giant portrait of Bartók.
Hearing my new Violin Concerto come to life, we all felt that it has a very good chance of being received well by audiences in the US and Europe alike. Tosca Opdam wants to perform it several times on a special tour and of course I very much hope that happens! Next up is the lengthy process of taking all the best takes and editing them into a final result, which will be posted on YouTube. But after being born of fire in Budapest, I feel this is a challenge I can handle.
Fingers crossed, next stop, the concert hall! Stay tuned…
---ooo---
Photos: Todd Mason.
David J Brown