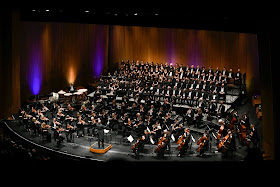 
There are some large-scale repertoire works whose duration presents a programming conundrum: too long for an equal-length first half of one or more other pieces, but too short to fill the entire evening. Some Mahler and most Bruckner symphonies come to mind, as well as Brahms’ German Requiem and on a less exalted level, Orff’s Carmina Burana.

Perhaps the most celebrated and oft-encountered challenge is Beethoven’s Ninth Symphony (except for exceptionally protracted performances, à la late Bernstein or Böhm), where a conductor has to find something of 25-30 minutes’ duration that will not be rendered negligible by comparison—like a warm-up band filling in time while a restless audience anticipates the star act.

To fill that slot before the LBSO’s grand finale to its 2018-19 season, Music Director Eckart Preu’s solution was novel: eschewing the usual fallback of either one of the short Beethoven symphonies or a Haydn (or like some more “challenging” UK programmers, slipping in a shovelful of unpalatable/forgettable/commissioned contemporary grit), he went instead for one of the preceding era’s grandest celebratory works, Handel’s Music for the Royal Fireworks HWV 351, composed in 1749 for outdoor performance to commemorate the Treaty of Aix-la-Chapelle.


All in all this work was a highly successful choice. The sequence of grand, non-developmental French Baroque forms was sufficiently remote in style to complement rather than be dwarfed or emasculated by the symphony’s giant drama. Though the Kalmus edition Maestro Preu used reduces Handel’s original cohorts of wind, brass and percussion to three each of oboes, bassoons, horns and trumpets, plus one timpanist, his use of the LBSO’s full strings designedly ensured a rich amplitude which, along with plenty of vigor, and accurate, committed playing, made for a grand and anticipatory festiveness in the extensive Overture—though with an appropriately graceful stepping back in the brief Lentement for oboes and strings before the repeat of the movement’s main body.

The short Bourrée that followed was notably brisk, and neither was there any languishing in the Largo alla Siciliana entitled “La Paix”. Then came a surprise (though Preu had hinted at it in his pre-concert talk). He switched the order of the last two movements, so that the Allegro “La Rejouissance” that normally comes next instead followed the usually final pair of Minuets. But this was not an occasion for purist fussing: given that the Fireworks Music is as devoid as any other Baroque score of detailed dynamic and expressive markings, “La Rejouissance” was just as amenable to climactic beefing-up as the second and grander of the two Minuets normally is.

Before the main course, Maestro Preu paid due tribute to the many who contribute to the Long Beach Symphony season: the audiences and sponsors, the Performing Arts Centre’s and LBSO’s staff and Ovation! volunteers, and especially the players, amongst whom he singled out the principal percussionist Lynda Sue Marks, retiring from the Orchestra after 62(!) years’ in its ranks (and who made her final appearance wielding the triangle as one of the three percussion players Beethoven adds to his already large forces in the symphony’s coda).

And so to the Ninth. With the guaranteed “Wow!” factor of the last movement and that tune, it has become so much the pre-eminent "go-to" work to end concert seasons that inevitably suspicions of routine fallback creep in. Which of course can never be: Beethoven’s Symphony No. 9 in D minor Op. 125 remains as cruelly demanding for players, singers, and conductor alike as it is an inspiring listen—even in a less than stellar performance—and it was to the credit of everyone at Long Beach that there wasn’t the slightest whiff of routine.

This was apparent right from the outset, where Preu was meticulous over Beethoven’s carefully qualified Allegro ma non troppo, un poco maestoso (a “little” majestically?!), if not quite at the metronome quarter-note=88. Rather than the usual distant fog of bare-5th, the pianissimo opening on divided violas and 'cellos against sustained horns probably got as close to being audibly 16th-note sextuplets, as written, as was possible in the Terrace Theater’s acoustic, and led to a first fortissimo tutti as clean as it was explosive, establishing the drama, scale, and dynamic range of what was to follow, and enabled by the LBSO’s utterly committed playing.

That said, this was not the performance for those who anticipate in the Ninth a granite mountain à la Klemperer, or Furtwänglerian visions of sublime eternity. If anything, it was closer to HIP (historically informed performance) style, though of course without the distinctive timbres of period instruments. As for tempi, Preu’s account came closest to this in the slow movement, where Beethoven’s marking of Adagio molto e cantabile is, to Romantically-conditioned ears, strikingly at odds with how the metronome quarter-note=60 must force the music to go. Maestro Preu went pretty much for the metronome, giving a duration of around 12 minutes, in line with such HIP adherents as Mackerras and Norrington, and startlingly less than the <20 minutes of, say, Solti.

This did clarify the movement’s structure as a complex set of variations (which tends to get lost when it’s taken veeery slowly), and turned it into an idyllic interlude between the Scherzo—to which Preu and his orchestra had given a positively cosmic dynamism—and the Finale to come, rather than being a self-contained epic of sublime beauty. But inevitably the speed did smudge some detail in a later variation where the undulating string sextuplets became hectic rather than flowing; a little easing here would have made a difference.

(Just to get one other niggle out of the way—why wait until the break between Scherzo and Adagio for the four vocal soloists to come on? Though they made their way unobtrusively enough to the platform, the inevitable swerve of audience attention and applause was an unnecessary interruption after the cumulative power of the first two movements.)

The Finale got off to a slightly rocky start with a conspicuous wrong entry, so that Beethoven’s revisiting of the first three movements’ main motifs seemed a bit rattled rather than reflective, but once the (appropriately urgent) first statement of the famous “Ode to Joy” theme was under way on piano ‘cellos, the movement was set fair. From the basses’ first declamatory “Freude!” and throughout thereafter, the Long Beach Camerata Singers, reinforced with the UCLA Chamber Singers, were outstanding, rising magnificently to the succession of Himalayan challenges that Beethoven throws at his chorus, not least the sopranos.

After the choir’s great “vor Gott!” outburst, Preu’s nippy tempo for the bass drum-led Alla Marcia gave tenor Jason Francisco a lot of syllables to negotiate with very little breath space, but otherwise he and his colleagues, Kala Maxym (soprano), I-Chin Feinblatt (alto), and Steve Pence (baritone) were fine in their respective solos and formed a well-matched if inevitably (given Beethoven’s ungainly word-setting) somewhat strenuous-sounding quartet.

Driven by shrieks from what sounded like more than the single piccolo Beethoven specifies, the final Prestissimo, though not overly headlong like some performances, was so electric that to reprise it, as they did when the torrents of applause finally subsided, seemed not superfluous but a necessary further discharge of the cumulative energy.

Orchestra and chorus alike covered themselves in glory, led with missionary fervor by Maestro Preu and (to judge by his enthusiasm when interviewed by Preu in the pre-concert talk) the Camerata Singers’ Artistic Director Dr. James Bass. Though there's no one "right way" to perform such an endlessly many-sided masterpiece as Beethoven’s Ninth Symphony, and indeed some may have felt short-changed in terms of spaciousness and reflectiveness, for me this was one of the most sensationally urgent, coherent, and undutiful performances of the work that I can recall in more than 50 years of concert-going. 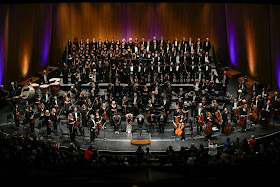 If you found this review to be useful, interesting, or informative, please feel free to Buy Me A Coffee!
David J Brown